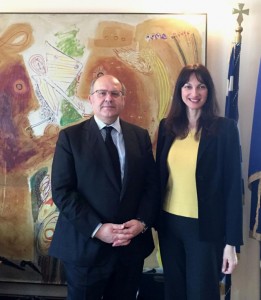 Ensuring the most effective and far-reaching promotion of Greece’s cultural heritage was at the center of a meeting between Alternate Tourism Minister Elena Kountoura and her counterpart at the Culture Ministry Nikos Xydakis on Monday.

Attracting more foreign visitors to the country, improving services at cultural and archaeological sites, supplementing the e-ticket to cover a wide array of cultural offerings and organising a series of year-round cultural events as well as finalizing the legal framework that will allow international producers to complete filming projects in Greece, topped the agenda of talks between the two ministers.

Both agreed that coordination and cooperation between the two ministries was of vital importance if Greece is to gain from its vast cultural and natural wealth.

Mr Xydakis and Mrs Koutoura also discussed the creation of a working group that will oversee the promotion of contemporary Greek culture through joint initiatives with the Greek National Tourism Organization (GNTO) and its active presence at international sector fairs, as well as sharing content from the GNTO’s visitgreece.gr with the culture ministry site.

Greece in Talks with Chinese for Kasteli Airport Project

Larissa to Bid for 2021 European Capital of Culture Title