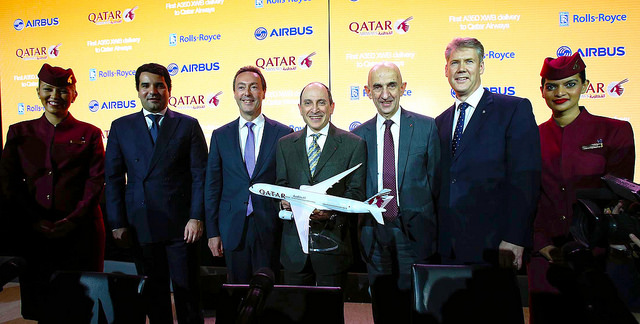 Qatar Airways’ first Airbus A350 XWB (Xtra Wide Body) and its fourth A380 have simultaneously arrived in Doha, the airline announced on Wednesday, December 24.

The delivery of the newest members of Qatar Airways’ fleet of 146 aircraft are the first of 80 A350s and the fourth of 13 A380s on order. The A350 aircraft, for which Qatar Airways is the global launch customer, is set to commence service on the Doha–Frankfurt route starting in January 2015. 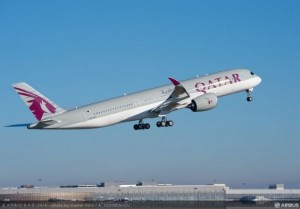 The A350 XWB aircraft flew to Doha from France, following the handover ceremony and press conference which were attended by Qatar Airways Group Chief Executive, His Excellency Mr. Akbar Al Baker, senior Airbus and Rolls Royce officials, and more than 150 international media in Toulouse.

With the delivery of the A350 XWB aircraft, Qatar Airways becomes the first airline in the world to operate every family of Airbus’ modern airliner portfolio, comprising the A320, A330/A340, A350 and A380. Earlier this year, Qatar Airways acquired the A380.

“We take immense pride in taking delivery of two aircraft at the same time joining our modern and dynamic fleet that is connecting the world,” Qatar Airways Group Chief Executive, His Excellency Mr. Akbar Al Baker said while Welcoming the arrival of Qatar Airways’ first A350 XWB aircraft and its latest A380 in Doha. 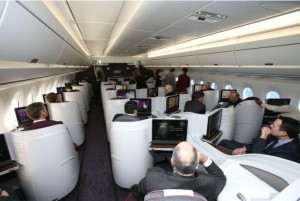 “As 2015 commences, we are looking forward to a new period of enhanced growth with our fleet setting fresh benchmarks for the aviation industry.”

The A350 XWB features the very latest in aerodynamics, design and advanced technologies and will set new standards in passenger experience, operational efficiency and cost-effectiveness.

According to Qatar Airways, the A350 XWB, in combination with the recently-introduced A380, will offer unprecedented levels of interoperability and a highly efficient solution to meet long-haul passenger demand on the rapidly expanding Qatar Airways’ network.

“This will further strengthen our leadership position as a world-class airline providing customers with a premium five-star travel experience, exceptional hospitality and seamless connectivity around the globe.”

Powered by two new-generation Rolls Royce Trent XWB engines, Qatar Airways A350 XWB is a perfect combination of innovative airline product design, environmental advances and the intrinsic comfort of an entirely new cabin set-up which are the hallmarks of this aircraft.

Mideast Travel Gives to the Children