The “Athens Marathon. Τhe Authentic” event will attract record-breaking numbers of participants this year and provide a major economic boost for the Greek capital, organizer Hellenic Athletics Federation (SEGAS) announced at a press conference held on 7 October in Athens.

Host city Athens will be in the international spotlight for the marathon’s four days of activities that kick off on 6 November and end with the 42,195-meter Marathon Race on 9 November.

According to SEGAS, between the 5K and 10K road races, power walking event, kids race, Special Olympics race and Marathon Race, some 35,000 runners will be in the streets of Athens.

“The 35,000 runners that have registered this year in all competitions, not only make this the largest sporting event in Greece, but also one of the largest in Europe,” the president of SEGAS, Kostas Panagopoulos, said.

Participation from foreign runners this year is 35 percent more than it was in 2013.

“The foreign participants, together with the thousands of Greek runners and stakeholders, will create significant buying power during the days of the event,” Mr. Panagopoulos underlined.

According to SEGAS, the Athens marathon leaves the city with 18 to 20 million euros each year.

“The Athens Marathon is a global celebration of culture and sport. A major reason for smiles in the city center… It makes Athens the heart of a tourism wave,” the president of SEGAS added. 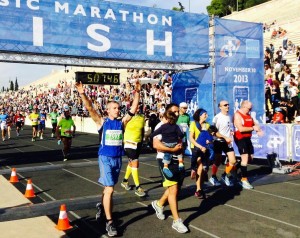 On her part, Greek Tourism Minister Olga Kefalogianni referred to the the marathon’s key role in the city’s tourism image and its contribution to the economy.

“The Marathon attracts international interest and is inevitably linked with culture, sports and tourism. It has become a tradition and an opportunity for someone to come to our country,” the tourism minister said.

Mrs. Kefalogianni added that the Tourism Ministry supports the marathon event and includes it in its plans to boost tourism in Athens and Attica in general.

The “Athens Marathon. Τhe Authentic” traces the route of the 1896 Olympic course, starting in Marathon on the eastern coast of Attica, site of the Battle of Marathon of 490 B.C.E., and ending at the Panathinaikon Stadium in Athens.

The 32nd Marathon Race will be held on 9 November, at 9am sharp, from the Marathon Start Venue in the town of Marathon. Runners finish the race when they enter the Panathinaikon Stadium in Athens, where the Finish Arch is found. 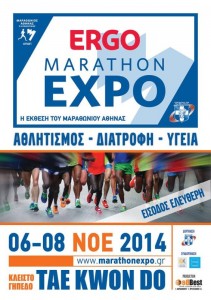 Greece will also be promoted as a sports tourism destination through the Athens Marathon Expo 2014 the Authentic on 6-8 November 2014 at the TaeKwonDo Indoor Hall & Exhibition Centre at Palio Faliro. The expo will be held by SEGAS and Be Best event company.

The expo, which will focus on running products, marathon events and tourism services, will lead to the actual “Athens Marathon. Τhe Authentic” event on Sunday 9 November.

Entrance to the marathon’s expo will be free of charge.

Hundreds Of Travel Bloggers To Flock To Athens, Greece, For TBEX 2014 Event

Tablets and Smartphones To Drive Next Phase Of Online Travel Growth