Athens Flying Week 2014: The Airbus A320 of AEGEAN and the Greek fighter F-16 “ZEUS” flying in formation. 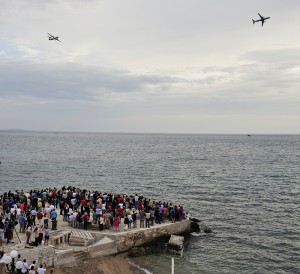 Athens Flying Week 2014 at Flisvos: Airbus A320 of AEGEAN and a DASH8 Q-400 of Olympic Air flying in formation.

AEGEAN’s air performance kicked off on Thursday 25 September at the pre-show event at Flisvos where an Airbus A320 of AEGEAN and a DASH8 Q-400 of Olympic Air flew in formation. The two aircraft gave a fantastic performance, one that was held for the first time and also considered quite symbolic as next month is the one-year anniversary of the merger of the two companies.

At the Tatoi Airshow, on Sunday 28 September, pilots of AEGEAN met up with the Air Demonstration Team Individual Aircraft F-16 “Zeus” of the Hellenic Air Force. The Airbus A320 of AEGEAN and the Greek fighter F-16 “ZEUS” flew in formation and won favorable comments from the crowd. This was the first time that an aircraft of the Greek Air Force and a passenger plane flew together in Greece.

Athens Flying Week 2014: Airshow fans got to see the first landing of a passenger jet aircraft at Tatoi military airport

In its third year, “Athens Flying Week” has established itself as an event of international standards and is the only event of its kind in Greece.

The Tatoi Airshow attracted some 50,000 spectators who rushed to the airport to see aircraft and some of the most experienced pilots in the world perform spectacular stunts, participate in adventurous formations and make parachute drops during a weekend dedicated to aviation.

Aegean was a major sponsor to the event this year.

International Workshop On Island Challenges To Be Held On Samos, Greece