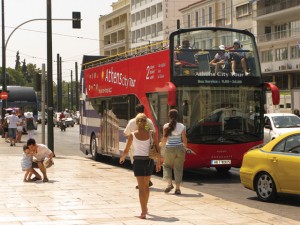 The number of foreign tourist arrivals to Greece rose 20.4 percent in the first five months of 2014 in comparison to the same period last year, according to data from the country’s main airports recently revealed by the Association of Greek Tourism Enterprises (SETE).

In an announcement, SETE said the increase in arrivals means that Greece welcomed 500,000 more tourists in the January-May 2014 period compared to the corresponding period one year ago.

Citing the new tourism figures, SETE said Greece is expected to reach its target of 19 million international visitors this year.

According to the data, 2.9 million tourists arrived in Greece during the January-May 2014 period. The highest increase in international arrivals was recorded in Kalamata (53.3 percent) followed by Santorini (34.2 percent), Chania (26.6 percent) and Samos (25.7 percent).

The data also showed that the airports of Thessaloniki, Heraklio, Rhodes and Skiathos recorded double-digit growth rates in terms of arrivals during the first five months of the year.

SETE also said that the forecast that Athens will welcome an additional 750,000 tourists this year seems to becoming a reality. In the first five months of 2014, Athens recorded a 34.4 percent rise in international arrivals compared to the same period last year. In May alone, arrivals to the Greek capital increased by 30.4 percent.

According to SETE, the Greek Tourism Ministry and the Greek National Tourism Organization have contributed in strengthening the positive image of Athens to markets abroad. For the last three months, SETE, through Marketing Greece, has implemented publicity actions and has achieved positive coverage of Athens in key target markets such as the UK, Germany, Russia and the United States.

Greece Is Lonely Planet’s Best Destination In Europe For 2014