Yacht Show On Poros, Greece, Attracts Brokers From All Over The World

Speaking at the inauguration ceremony of the East Med Yacht Show – Poros 2014, Mr. Varvitsiotis noted that if yachting tourism receives support, it could boost the Greek economy and offer more jobs. 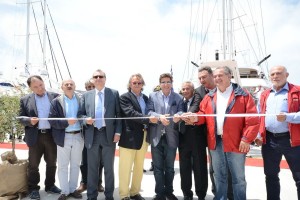 For the 13th consecutive year, during 2-7 May, the harbor of Poros welcomed international charter professionals, private yacht brokers, travel agents and tour operators and offered a broad display of 55 luxury crewed yachts for charter. The yacht show was also an opportunity to showcase Greece’s marine tourism industry and the island of Poros as a holiday destination.

During the yacht show, a series of events were held that included lectures and seminars. The main topics presented and discussed were focused on Greece’s new law for yachting, thematic tourism and the creation of waterways for seaplane flights. Poros will be among the Greek islands included in the planned Greek seaplane network.