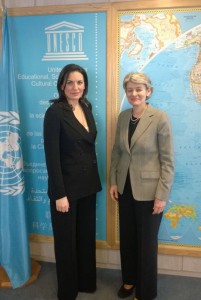 Athens will be the host city for a joint conference in September on “Tourism and Culture Development,” organized by the Greek Tourism Ministry and the United Nations Educational, Scientific and Cultural Organization (UNESCO),  an announcement of the ministry said.

Greek Tourism Minister Olga Kefalogianni broached the idea of a Greece-UNESCO conference in a meeting she had with the organization’s director-general, Irina Bokova, during her official visit to Paris, France.

Greece’s relations with UNESCO was the main topic of the meeting.

Mrs. Kefalogianni briefed Ms. Bokova on Greece’s action plan for tourism that is in progress. She also mentioned the joint actions the tourism ministry has undertaken with other ministries to improve the services offered to foreign visitors of the country.

Both sides exchanged views on the role of UNESCO in the promotion of international cooperation among states.

Acropolis Museum Will Be Open On Mondays From 1 April