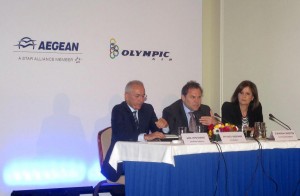 During a press conference in Athens on 27 March, the airline’s vice president, Eftichios Vassilakis, presented the company’s growth strategy for 2014 that includes 13 million available seats (1.150 million more than in 2013) and the addition of five Airbus A320 & A321, bringing the company’s aircraft to 50.

More specifically, the Greek airline will expand its international network with eight Greek hubs (with the addition of a new one at Hania), linking Greece with a total of 87 international destinations in 32 countries, five of which are new: Denmark, Sweden, United Arab Emirates, Jordan and Lebanon.

Out of the international destinations, 17 are new and 14 depart from Athens. The new destinations include: Birmingham in United Kingdom; Marseille and Nantes in France; Zurich in Switzerland; Hamburg, Hanover and Nuremberg in Germany; Copenhagen in Denmark; Catania in Italy; Abu Dhabi in the United Arab Emirates; Beirut in Lebanon; Stockholm in Sweden; Izmir in Turkey and Amman in Jordan. 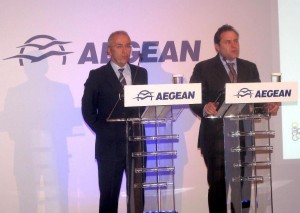 When referring to Greek tourism’s key markets, Mr. Vassilakis announced that the company’s network will be significantly enhanced in Germany, France and Russia. 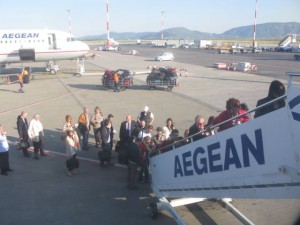 During the January-March 2014 period, Aegean Airlines recorded an increase of 17 percent in domestic passenger traffic, with 125,000 more passengers compared to 2013 and 860,000 in total. According to the airline, the increase was a result of Aegean’s new fares policy and synergies that surfaced from the acquisition of Olympic Air.

Aegean said it will add 200,000 new seats to its domestic network this year to broaden the accessibility to even the smallest island in Greece, both for the Greeks and for foreign visitors.

In regards to new domestic routes, this year Aegean will connect Thessaloniki to Kefalonia and Rhodes to Santorini and Mykonos.

KLM Allows Portable Electronic Devices To Be Used On Board