The only evening departure from Continental Europe to Mumbai, effective 14 May 2014 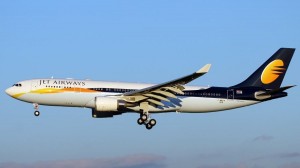 Jet Airways, India’s premier international airline, has announced the launch of a daily direct service from Paris to Mumbai with effect from 14 May 2014, subject to Government approval. This new flight from Paris to India’s financial capital Mumbai will be operated by wide-body Airbus A330 aircraft.

Jet Airways flight 9W 123 will depart Paris at 2110 hrs (LT) and arrive at Mumbai at 0945 hrs the following day, thus providing a seamless connection to the airline’s entire network within India. The return flight 9W 124 will depart from Mumbai’s brand new Chhatrapati Shivaji International Airport at 1200 hrs and arrive at Paris’ Charles de Gaulle airport  at 1750 hrs. Moreover, the Jet Airways flight from Paris to Mumbai will be the only evening departure from continental Europe to Mumbai.

Paris will be the airline’s twenty first international destination and Europe’s key departing point for travel to the Indian subcontinent and beyond destinations in South-East Asia.

With this new additional flight from Paris to Mumbai, Jet Airways will now offer 7 daily direct or connecting departures from Europe via Brussels, London, and Abu Dhabi (subject to Government approval) to Mumbai and Delhi, with a choice of morning or evening flights.

The company has recently developed the  “travel smart” concept from Europe to India, providing travelers the flexibility of a wide choice of flights, a high frequency and all at the same fare (excluding taxes and surcharges).
Jet Airways will deploy an Airbus A330-200 aircraft on this route.