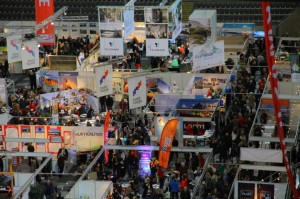 The Norwegian fair this year attracted some 45,000 tourism professionals and visitors from some 115 countries.

Greece participated in the Norwegian fair through the private stand of Oslo-based communication agency North Events Limited. The agency promotes Greek green hotels, culture and gastronomy in the Nordic markets.

For the first time, the Municipality of Sifnos participated in a Scandinavian expo and explored new markets and established contacts with Norway’s tourism industry.

P.RO.TOUR., the Rodos Tourism Promotion Organization, gave a vibrant showing with the display of a giant billboard and two service stations for visitors.

Mediterranean Foods AB promoted traditional Greek products to the Norwegian market throughout the days of the exhibition and presented impressive dishes. The company also served “Greek Breakfast” to Norwegian visitors.

North Events will also take part in the international tourism exhibition Matka (16-19 January 2014) in Finland, the Grekland Panorama expo (14-16 February 2014) in Stockholm – the first exclusive exhibition on Greece in Sweden, and the Danish travel trade show Ferie For Alle on 21-23 February 2014 where Greece will be the country of honor this year.