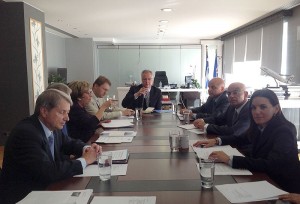 Greece has made significant reforms in recent months to the tourism sector that aim to solve chronic problems, Greek Tourism Minister Olga Kefalogianni informed the head of the European Commission Task Force for Greece, Horst Reichenbach, in a meeting today, 23 October, in Athens.

More specifically, Mrs. Kefalogianni informed Mr. Reichenbach on the initiatives taken to strengthen Greek tourism through the simplification of the approval procedures for investments, the further development of special forms of tourism and the codification of the country’s tourism legislation and tourism education.

On the issue of developing Greek special forms of tourism, she referred to the progress that has been made for the promotion of medical tourism to markets abroad. The Greek Tourism Ministry has joined forces with the Health Ministry and is expected soon to sign a joint ministerial decision for medical tourism.

Also discussed was the financing of Greek tourism businesses through the optimal use of EU funds from the new National Strategic Reference Framework (NSRF) in cooperation with banks.

When presenting the national plan for tourism, the tourism minister informed the head of the European Commission Task Force that the first signs have been “encouraging” for Greece.

The axes of the national plan for tourism involve the implementation of interventions made by the new tourism law (N. 4179), the tourism development through the special zoning plan for tourism, the optimal use of the structural funds from the Contract/Partnership Agreement for the Programming Period 2014-2020 (new National Strategic Reference Framework) and restoring Greece’s image abroad.