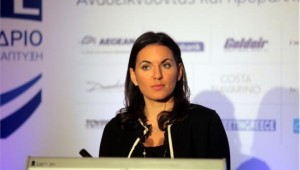 Greek Tourism Minister Olga Kefalogianni sent a message of optimism for next year’s tourism season during the 12th Tourism & Development Conference of the Association of Greek Tourism Enterprises (SETE) held in Athens on 22 October.

Mrs. Kefalogianni referred to the achievements of 2013 and listed the Tourism Ministry’s initiatives that aim for the modernization of the Greek tourism product.

Greece is preparing for a record year in tourism this year, with 2013 expected to end with a projected all time high of 17 million foreign visitors.

During her speech, the tourism minister presented the axes of the National Plan for Tourism, which involve:

– implementing institutional interventions made by the new tourism law (N. 4179)
– tourism development through the special zoning plan for tourism
– best use of the structural funds from the Contract/Partnership Agreement for the Programming Period 2014-2020 (new National Strategic Reference Framework)
– restoring Greece’s image abroad

In an effort to jump-start the booking season for 2014, the tourism ministry and the Greek National Tourism Organization have already launched promotional activities to international markets.

SETE Aims For Greece To Welcome 24 Million Tourists By 2021