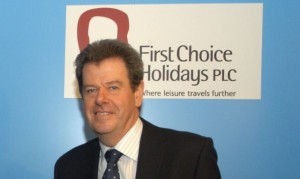 “Greece has seen an impressive recovery in 2013 and in 2014 we will increase the number of our customers enjoying a holiday in this destination to some 2 million – an increase of nearly 10 percent over this year,” the head of TUI Travel PLC, Peter Long, said on 17 October following a meeting with Greek Prime Minister Antonis Samaras in Athens.

TUI believes arrivals to Greece will continue to grow as the company develops more unique holiday experiences for its customers.

“Following the troubles last summer, Greece has put its economic woes behind it and is looking towards a future of growth in which tourism will undoubtedly play a large part,” Mr. Long said.

The travel giant serves over 30 million customers in more than 31 countries, with 54,000 employees and its own air fleet of 141 aircraft.

“By investing in the country’s main gateways’ infrastructure, such as airports and ports, as well as improving road networks, the Greek Government can ensure tourism will remain a key driver of the economy,” he said.

TUI announced that with the Greek side it would jointly explore the extension of the season in selective destinations and continue to invest in resorts, not only through direct investment in new hotels but also by supporting its hotel partners.

According to Mr. Long, TUI Travel annually spends over half a billion euros on purchasing services in the Greek tourism industry.

TUI plans to open new hotels in Rhodes and Crete and this way help the local economy as additional job opportunities will be created across the entire value chain through its subsidiaries and suppliers.

Greece Losing Over 1 Billion Euros Due To Illegal Hotels