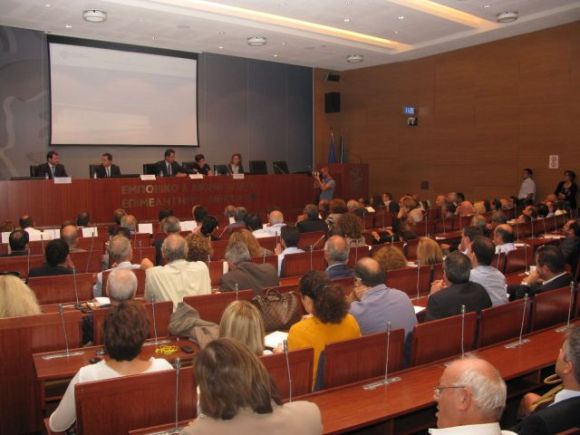 The results of Greece’s recently introduced favorable regulations to attract investment to the economy were presented today, 23 September, at a briefing in Athens by the Invest in Greece agency and the Greek Ministries of Development and Interior. 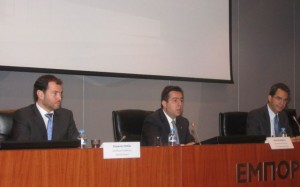 “We aspire to transform Greece from a red tape country to a ‘red carpet’ country for investments,” said Notis Mitarachis, Deputy Minister of Development and Competitiveness. He is pictured here with Stephanos Issaias, CEO Invest in Greece and Angelos Syrigos, secretary general of population and social cohesion, Ministry of Interior.

The new favorable regulations provide for non-European Union citizens, who plan to make strategic investments in Greece, to almost instantly obtain residence permits that are valid up to 10 years with right to extension.

Also, third-country citizens who buy property in Greece, the value of which exceeds 250,000 euros, are granted a five-year residence permit with right to extension.

Greece has already granted some 20 residence permits to citizens from Russia, Ukraine, the United States and Canada that announced plans for strategic investments in Greece on real estate they had already purchased.

The Invest In Greece agency has already received over 300 individual requests and queries in regards to Greece’s residence permit offer to third-country citizens that want to invest in the country.

According to the agency’s CEO, Stephanos Issaias, 40 percent of the requests were submitted mainly from China, India, Egypt, Libya and Russia.

Further information in regards to obtaining a residence permit in Greece in exchange for investing in the country can be found on the Invest in Greece website.

During the briefing it was underlined that the duration of the specific residence permits will not be added to the years needed to receive Greek citizenship, while it will not grant a work permit either.

According to reports, the practice of giving residence permits in exchange for real estate investment is already in operation in other countries under EU/IMF bailout mechanism, such as Portugal and Ireland.