Aegean Airlines was honored for the third consecutive year with the “Best Regional Airline in Europe” award, presented by SKYTRAX at the recent 2013 World Airline Awards. The award ceremony took place at the Paris Airshow on 18 June. 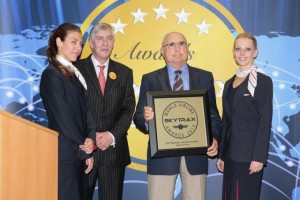 This is the fourth time the Greek carrier has won the “Best Regional Airline in Europe” award since 2009.

“We are proud that our passengers around the world recognize our efforts to secure our position as one of the leading airlines in Europe,” Theodore Vassilakis, chairman of Aegean Airlines, said.

“The repeated distinction of Aegean is an advertisement of Greek hospitality services and Greek tourism,” he added.

Air travelers completed the SKYTRAX online survey questionnaire about their experience with airlines on the ground and onboard, during a 10-month period. The survey covered over 200 airlines, from the largest international airlines to smaller domestic carriers.