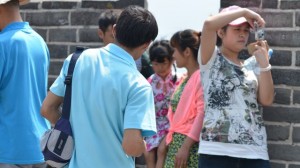 “In about 10 years time, the number of Chinese tourists visiting Greece is expected to exceed 2.5 million every year,” the president of the Association of Greek Tourism Enterprises (SETE), Andreas Andreadis, said last week at the “Crete Meets China” conference in Athens.

The conference was held by the Region of Crete and the Hellenic-Chinese Chamber.

During his speech, SETE’s president said that the facilitation of the issuance of multiple entry visas was the key for Greece to see an increase of Chinese arrivals.

Mr. Andreadis added that the new private company Marketing Greece and the Greek National Tourism Organization would promote specific Greek tourism products to the Chinese market such as honeymoon tourism.

On her part, Greek Tourism Minister Olga Kefalogianni invited Chinese companies to invest in Greece and for Chinese tourists to visit our country.

She also referred to discussions for the launch of a direct flight between the two countries (Athens-Beijing or Athens-Shanghai) to boost the number of visitors from China to Greece.

According to UNWTO data, the Chinese have become the biggest source of global tourism income after spending 79 billion euros while traveling abroad in 2012.

The total is 40 percent higher than the year before, and puts them well above the next two highest-spending countries, Germany and the United States.