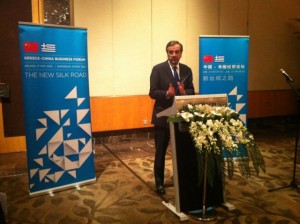 Greek Prime Minister Antonis Samaras speaking during the official reception for the Greek delegation at the Westin Beijing Financial Street.

Greek Prime Minister Antonis Samaras today, 16 May, invited Chinese entrepreneurs to invest in Greece and become part of the “Greek success story,” while speaking at the Chinese Academy of Social Sciences in Beijing.

The Greek premier is on an official trip to China accompanied by 50 businessmen and several ministers to boost bilateral trade, investments and tourist travel to Greece.

The Greek PM met today with Chinese Premier Li Keqiang and the two leaders discussed the use of Elliniko, the expansion of Cosco’s activity in the Piraeus port and also investment possibilities in Greek railways. The Chinese side also expressed an interest to invest in other Greek ports and regional airports.

Official reception for the Greek delegation

An official reception for the Greek delegation was held today at the Westin Beijing Financial Street.

During the reception, the Chinese premier requested for Greece to cut red tape and facilitate the process for granting visas to Chinese travelers.

Tomorrow, Friday, 17 May,  Mr. Samaras will be received by China’s president Xi Jinping and afterwards meet with the chairman of the National People’s Congress of China, Zhang Dejiang.

He will later give the keynote speech at the Hellenic-Chinese Business Forum. Some 180 Chinese businessmen are expected to attend the forum.

“The fact that there is such a large attendance from the Chinese side on such short notice, clearly shows their interest to focus on synergies with Greece,” Mr. Samaras said.

His agenda also includes a meeting with Shanghai mayor Yang Xiong on Saturday 28 May in Shanghai.

With USD 8.3 trillion, China is the second largest economy in the world. It stands next only to United States which has USD 15.7 trillion strong economy.

According to a survey by the Organisation for Economic Cooperation and Development (OECD), China is on course to become the world’s largest economy “around 2016.”

Greek Tourism Minister Gets Another Invite To China