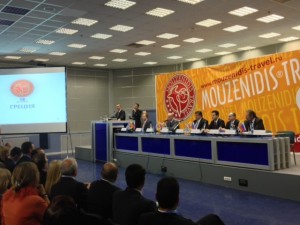 Mouzenidis Travel recently announced plans to launch a new airline named “Ellin Air” that will offer direct flights from new Russian regions to Greece. Mouzenidis Travel is one of the largest Greek companies working with the Russian market.

The new airline, due for launch this August, will initially operate three Airbus A320s but the number is expected to increase in 2014.

According to Mouzenidis, the upcoming tourism season will start strong for Greece as Russian early bookings are already showing a 20 percent increase.

Russians travelers will be offered direct flights to six Greek destinations: Athens, Thessaloniki (Chalkidiki-Pieria-Thassos), Araxos (throughout the Peloponnese), Heraklion (for all of Crete), Corfu and Zakynthos.

According to Mouzenidis, the number of visas issued to Russian citizens for travel to Greece is expected to increase this year by 20-30 percent.

Last year, there was a 30 percent increase in the issuance of visas to Russian citizens.