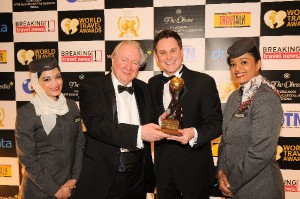 Etihad Airways, the national airline of the United Arab Emirates, shined at the World Travel Awards, yesterday, 12 December, taking the World’s Leading Airline title for the fourth year in a row. The awards were announced at a gala event at the Oberoi Gurgaon in New Delhi, India.

The World Travel Awards were established in 1993 to seek out and reward the very best travel organizations in the world, acknowledging the elite organizations in their respective fields through a global industry vote. In 2012, nearly 650,000 votes were cast by travel professionals from 191 countries. The World Travel Awards have achieved top industry status and been named by the Wall Street Journal as the “Oscars of the Travel Industry”.