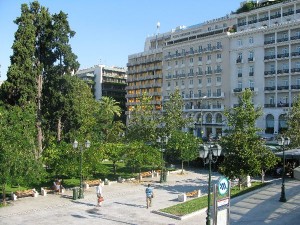 Hotel group Lampsa SA will operate the 91-room King George Palace on Syntagma Square, according to a recent agreement the group signed with the hotel’s owner Eurobank. Lampsa is the owner of the adjacent Hotel Grande Bretagne.

According to reports, the agreement concerns a long-term lease of 20 years with a fixed annual rental rate of 700,000 euros. Leaseholder Lampsa also has a preference right for the sale of the King George Palace should the bank ever decide to sell.

The King George Palace first opened in 1936 and was closed down in 1988 due to debts of the owning company Hotels of Greece. In 1995 the hotel was acquired by the Bank of Crete, which then merged with Eurobank.

In 2001, Eurobank signed a 30-year contract with the Daskalantonakis Group for the renovation, leasing and management of the hotel.

Following a six-billion euro investment, the fully renovated hotel reopened its doors in late May 2004. Since then the King George Palace has won international awards as one of the 100 best hotels in Europe.