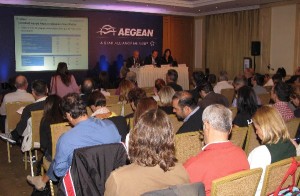 If competition authorities give the green light for Aegean Airlines to acquire Olympic Air from Marfin Investment Group (MIG), the deal could be completed within the next five to seven months, Aegean Airlines vice president, Eftichios Vassilakis, said today, 25 October, during a press conference in Athens.

Aegean Airline’s press conference came a few days after the Greek carrier announced the agreement it reached with MIG to acquire Olympic Air. (The former state carrier Olympic Air has been owned by MIG since it was privatized in 2009.)

However, Mr. Vassilakis told the media that competition authorities must decide quickly. “Otherwise it may be too late,” he said.

The airline’s vice president underlined that due to the problematic situation in the Greek aviation market, the viability of both companies were at risk.

According to data of Aegean Airlines, from 2009 and onwards, air traffic on domestic routes dropped 30 percent and the value of the airline market shrank by 45 percent.

Mr. Vassilakis said the airline’s average fares had been reduced by 25 percent in the last three years.

“This acquisition is necessary in order to reduce unit costs, otherwise we will have to suspend flights in large numbers,” he said.

Mr. Vassilakis underlined that the synergies from the agreement would offer enhanced network coverage with competitive prices to the consumers. “All domestic destinations will be covered,” he said.

The price for Aegean Airlines to acquire 100 percent of Olympic Air is set at 72 million euros (94 million U.S. dollars).