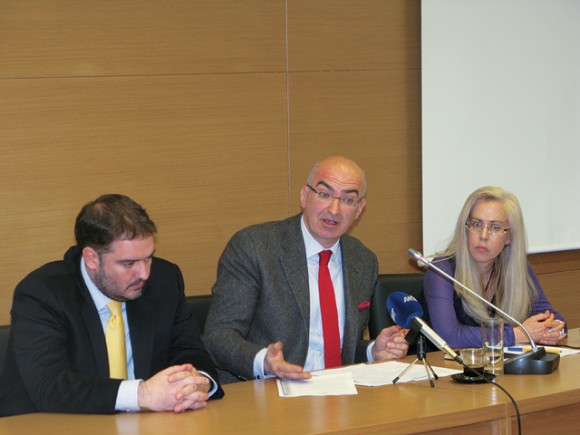 Hellenic Chamber of Hotels President Yiorgos Tsakiris (center) identified the main receptors of social tourism that include Macedonia with 20 percent, Ipiros with 18 percent and Central Greece with 16 percent. “If the program is abolished, automatically 7,500 jobs would be lost mainly in the mentioned destinations, which are areas with low per capita income,” he stressed.

The Hellenic Chamber of Hotels last month submitted a proposal to the Ministry of Labor and Social Security that aims to modernize the subsidized social tourism holiday programs -that secure domestic tourism- in an environment of free competition.

The proposal follows an announcement made by the Greek Government in February in regards to the abolition of the Workers’ Welfare Organization (OEE) that provides annual social tourism programs to low-income Greek employees. The organization’s closing down was included on an agreement of austerity measures demanded by Greece’s creditors in exchange for a new bailout loan.

The government has yet to officially announce if the social tourism programs would actually be abolished along with the organization.

Through its proposal the chamber aims to directly improve the quality of services offered to consumers, remove free competition barriers and also reduce the bureaucratic costs of the accommodations qualified to join the program. The chamber said it would qualify which hotels would participate in the program.

However, shortly after the hotel chamber went public with its proposal, the Hellenic Federation of Rented Rooms and Apartments sent a letter to the Ministry of Labor and Social Security and expressed reservations in regards to the chamber’s intentions.

According to the federation, if the chamber would take over the social tourism programs, it would first distribute to its own members (hotels and campsites) and last to the rooms and apartments to rent, which are members of local industry and commerce chambers.

While speaking recently to Greek journalists, Culture and Tourism Minister Pavlos Yeroulanos said the abolition of the social tourism programs was a “very unfortunate development.” At the moment the ministry has not announced plans aimed to strengthen domestic tourism.

More than one-third of Greeks are not planning to vacation this year due to the economic crisis, according to a recent Eurobarometer survey.