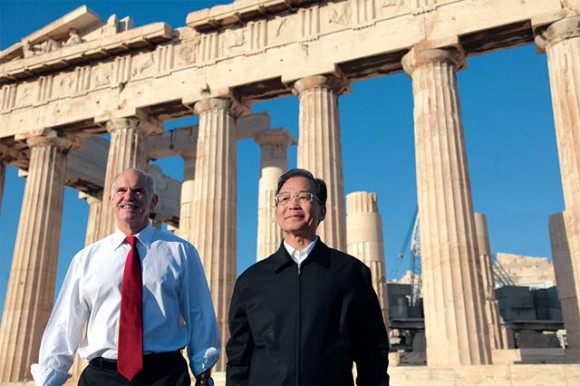 Prime Minister George Papandreou gave his Chinese counterpart Wen Jiabao the grand tour of the Acropolis during the latter’s visit to Athens in early October.

Prime Minister George Papandreou signed 13 agreements last month in Athens with Chinese Premier Wen Jiabao that cover sectors of shipping, commerce, culture and tourism. This was the first official visit to Greece by a Chinese head of state in 24 years.

Press reports underlined that one of the most significant deals signed between the two countries aims at transforming Piraeus Port into a regional hub for Chinese exports toward Europe through the expansion of Cosco’s presence there.

According to the memorandum, the Arab state may invest five billion euros in Greece’s tourism, real estate, energy, transports, port and airport facilities, as well as other sectors.

Although the memorandum does not cover specific projects so far, press reports said that Qatari investors are interested in the development of the 1,500-acre site of the former Athens International Airport at Hellenikon.

Some Greek press reports stressed that Hellenikon would be transformed into a second “Las Vegas.” The government, however, dismissed that theory.