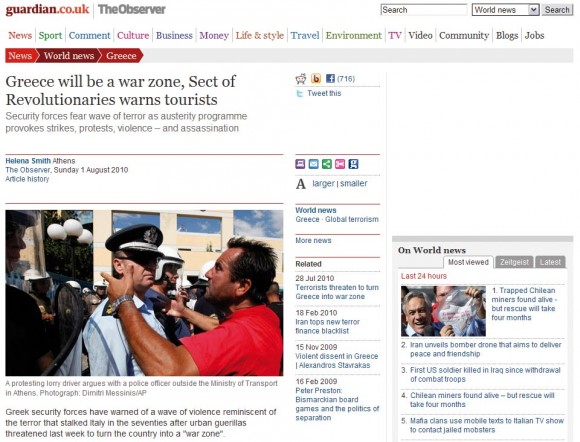 Strikes and protests against government austerity measures, port and archaeological site blockades, air traffic controller’s mobilizations and the recent fuel shortage caused by a trucker strike made Greece the target of critical international news stories amid the tourist season.

“After the chaos at airports that already caused incalculable damage to the image of the country and the unknown scale of losses from Greece not being selected as a holiday destination, we now have to face fuel shortages,” the Association of Greek Tourism Enterprises (SETE) had said in a recent announcement.

The trucker’s strike came at a time when holidaymakers began their vacation with many of them wondering whether they would be able to return home. Tourism professionals said that this resulted to negative publicity in the international press, which hit Greece’s popularity to the extent to discourage travelers from visiting the country.

According to UK’s BBC network, Northern European tourists “naturally prefer Mediterranean destinations except Greece because of strikes and demonstrations.”

The BBC report underlined that UK tourists would not prefer traveling to Greece this year due to potential problems that may cause delays in returning home.

The British network added that German tourists, who have increased their travel habits this year, also avoid Greece as a tourist destination and opt for Turkey and Egypt as these countries do not face such problems.

Although the protests eased off by August, tourism representatives told the press that the negative coverage left its mark on Greece’s tourism sector.

Deputy Culture and Tourism Minister Yiorgos Nikitiadis told Reuters news agency that if such incidents had not occurred, “tourism would have certainly made it this year and revenues would have been at least at last year’s levels.”

According to the deputy minister, revenues for 2010 are expected to slide seven to nine percent.

“We have to restore the country’s image and change our strategy to win back visitors,” he said.

On its part, the Pan-Hellenic Federation of Tourism Enterprises (GEPOET) wondered in an announcement “what worse could be done to tourism, now that nothing is left standing?”

Meanwhile, the Sect of Revolutionaries terrorist group sent out a proclamation in late July warning tourists “Greece is no longer a safe haven of capitalism” and threatened to cause chaos during the peak holiday season. (The terrorist group had assassinated Greek journalist Sokratis Giolias that month.)

However, the proclamation made clear that the group’s purpose is to damage the tourism industry and not carry out indiscriminate attacks. No direct threat to tourists was made.

The Greek government in an announcement insisted that there was no danger to tourists or Greeks for that matter.

“All appropriate security measures are being put in place to uphold the safety of tourists and that of the public,” the announcement said.

Representatives from the Greek tourism sector agreed that although international negative press articles on Greece are based on true events, many articles have been excessive and unfair.

“There is a fine line between freedom of the press and scaremongering,” President of Thessaloniki Hotels Association Aristotelis Thomopoulos told the press.