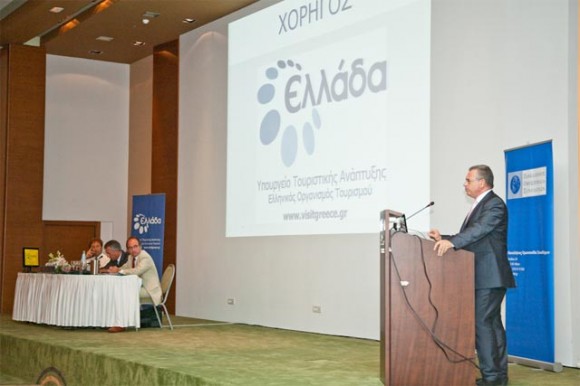 During his speech at the workshop, Tourism Minister Kostas Markopoulos refered to the GNTO’s new portal www.mygnto.gr that is under pilot version but will eventually become “the permanent Internet gateway for Greece’s tourism sector.”

An electronic register of all Greek tourism businesses will be prepared and presented by the end of the year, Tourism Minister Kostas Markopoulos said at a marketing workshop held in Chania, Crete, by the Hellenic Hotels Federation.

During his opening speech at the workshop Mr. Markopoulos also refered to the Greek National Tourism Organization’s new portal that is currently under pilot version but will eventually become “the permanent Internet gateway for Greece’s tourism sector.”

The workshop in Chania was part of a series entitled “Hotel Marketing in the modern tourist market in Greece” that is aimed at the detailed briefing and training of hoteliers of 15 major Greek destinations. The first workshop took place in Chalkidiki.

During the workshop current data was presented as well as the main trends of the international and regional tourism market.

In addition, hoteliers were enlightened on methods and applications of hotel marketing in line with the modern needs and requirements of the tourism market.

“This workshop can be considered the most powerful school for all, including myself, as deeper knowledge can be achieved,” said Mr. Markopoulos. He added that through the workshops local authorities and tourism professionals would gain the necessary understanding amongst themselves.

After Chania the next workshop took place on Rodos.

The workshops are held under the support of the Greek National Tourism Organization and the Tourism Ministry.