The opening of the Athens-Abu Dhabi route is another milestone that marks the strong relations between the United Arab Emirates and Greece, Etihad Airway’s chief commercial officer, Peter Baumgartner, recently said at the airline’s first press conference in Athens.

As of last month Etihad Airways, the national airlines of the United Arab Emirates, conducts flights from Athens to Abu Dhabi three times a week, every Tuesday, Friday and Sunday. 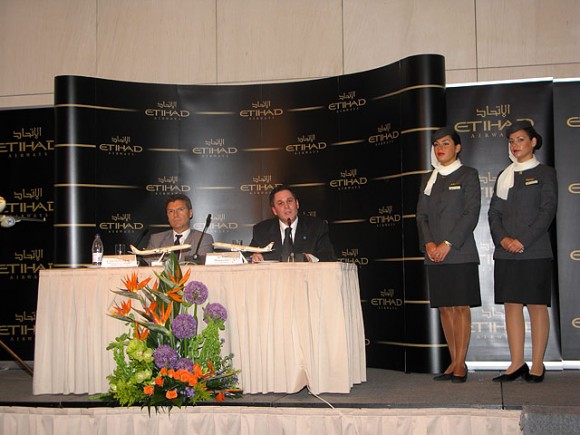 Dr. Yiannis Paraschis, CEO of Athens International Airport, and Peter Baumgartner, chief commercial officer of Etihad Airways. In April, the airline won the Skytrax World Airline Award for having the best business class in the world.

The new service departs Abu Dhabi at 9:15am and arrives in Athens at 1:05pm and from Athens airport return flights for Abu Dhabi depart at 2:30 pm and arrive in Abu Dhabi at 8 pm on the same day.

From October 2009 flights will increase to five services a week and then daily from the start of 2010.

Through Abu Dhabi Greek passengers can continue journeys to more than 20 destinations such as Sydney, Melbourne, Beijing, Singapore, Bangkok, Kuala Lumpur and Johannesburg.