Star Alliance recently accepted Greece’s Aegean Airlines as a future member carrier, according to an official announcement at a press conference held in Athens.

“Through the Aegean Airlines’ network, our customers in the future will gain access to numerous destinations in Greece as well as have more choice on routes within Europe,” said Jaan Albrecht, CEO Star Alliance. 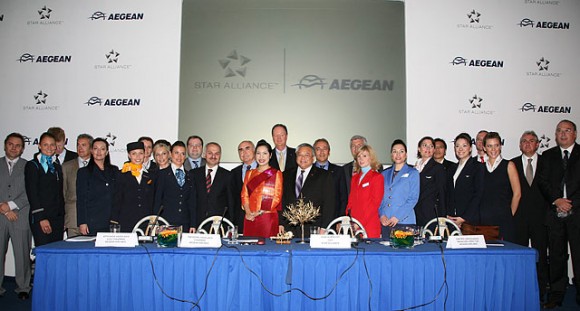 All members of the Star Alliance welcome their future member carrier, Aegean Airlines.

Through its future membership in Star Alliance, Aegean Airlines will gain access to the many markets across the globe with large communities of Greek descendants, such as Australia, Canada, South Africa and the United States. Star Alliance currently has 21 full members, including United Airlines and Lufthansa.

The integration of Aegean Airlines and Star Alliance is estimated to take around 12 months.

Aegean Airlines chairman, Theodoros Vassilakis said that it is a great honor and opportunity for the airline to join Star Alliance.

“In the near future our customers will be able to enjoy the network, privileges and loyalty rewards of the largest and most recognized airline alliance in the world,” he said.

Olympic Air To Fly As Of October 2009