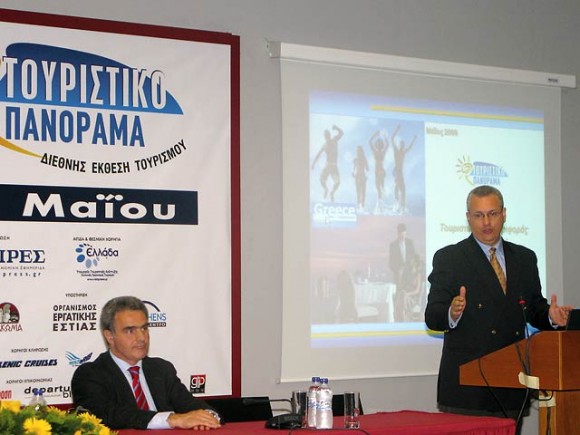 Tourism Minister Kostas Markopoulos during the inauguration ceremony of the 14th Touristiko Panorama.

The 14th Touristiko Panorama had fewer participating exhibitors than previous years and limited activities but once again gave travel professionals the opportunity to increase business deals and meet with potential clients.

This year’s Touristiko Panorama, organized by Kalofolia Express Group, took place at the ExpoAthens exhibition center in Anthousa, eastern Attica, during 7-10 May and provided free entrance to the public.

The general public mainly visited the exhibition center over the weekend and was informed on prospective holiday destinations, new offers, bargains and new forms of tourism.

With the participation of exhibitors from Greece, Latin America, Europe, Asia and Africa, the main topic for discussion was the issue of the global economic crisis.

During the inauguration ceremony of the fair, Tourism Minister Kostas Markopoulos informed the audience that Greek tourism has proven that not only can it survive the global economic crisis but can also minimize its impact on domestic tourism.

Mr. Markopoulos underlined that, according to tourism professionals arrivals are expected to drop 10-15 percent as opposed to the 30-40 percent forecast made during the first months of 2009. 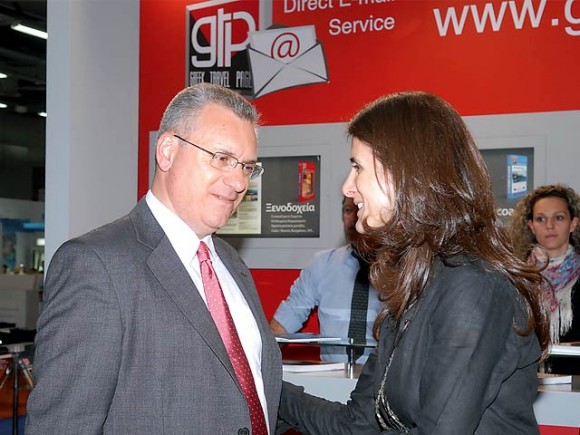 The tourism minister also informed that Greece saw the lowest drop of incoming tourism bookings throughout the Mediterranean basin in March while tourism traffic moved to even better levels in April.

On his part, Yiorgos Kalofolias, chief executive officer of Kalofolia Express Group, referred to the special importance tourism has on the national economy and Greece’s development.

He also emphasized the key role domestic tourism plays for the regional development of Greece and for the support of local communities.

In addition, Kapa Research revealed that Greeks appear very reserved in regards to their holiday plans for this year, according to its recent survey “Greek Tourist Behaviour Trends for 2009.”

The major conclusion of the survey was that one in three Greeks claim that they are planning either an inexpensive or a shorter summer holiday for 2009.

In regards to the global economic crisis and its impact on Greek tourism, the majority of the survey’s respondents (64.3 percent) consider that a reduction in tourist traffic will occur but it will not be as tragic as the predictions say.

The majority of respondents (59.6 percent) believe that a drastic reduction in prices is the most appropriate move on behalf of the tourism industry.

According to data released from the survey, 52 percent would take a similar vacation to last year, as opposed to 70 percent that answered the same question in last year’s survey. 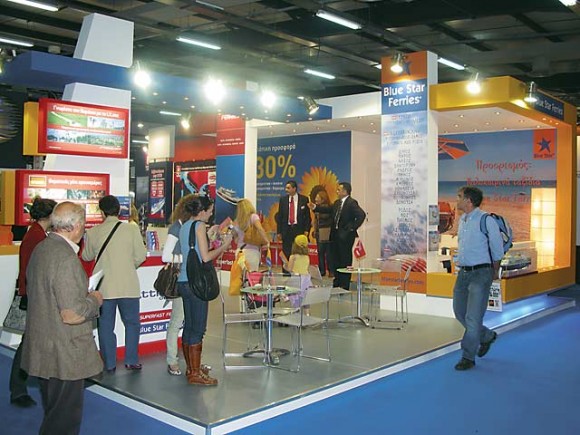 In regards to the question “how many days will your summer vacations last?” the percentage of those who said their vacations would last a week at the most increased to 27.6 percent from 19.7 in 2008.

Also increased (63.8 percent) was the percentage of Greeks that replied that their vacation would last two to three weeks (59.2 percent in 2008).

A major reduction is noticed in regards to holidays that would last longer than a month as only 3.1 percent of respondents considered this likely as opposed to 21.1 percent last year.

Statistics also revealed how much money Greek travellers are willing to spend this summer.

According to Kapa Research, when compared with last year’s results those that would spend up to 900 euros increased from 39.7 percent to 44.4 percent. 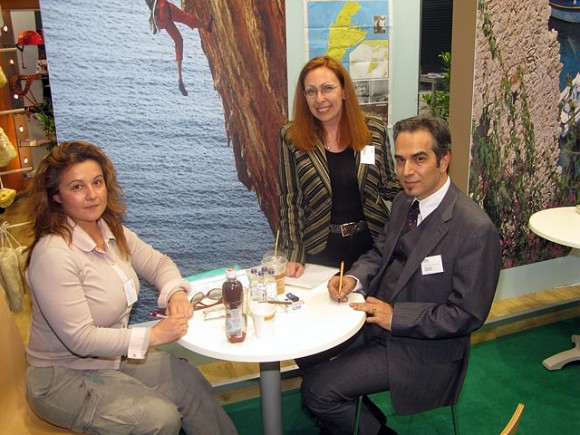 Mary Papadopoulou (Fivos Tours) with Evdokia Vouvali and Nikolaos Papadopoulos (Kalymnos Municipality) at the stand of the Prefecture of the Dodekanissos who informed visitors of the island group’s alternative forms of tourism.

The percentage of those that would spend over 900 euros was reduced to 55.6 percent from 60.3 percent last year.

As for accommodation options, interestingly enough 38.8 percent of respondents said that they would stay in a hotel during their summer vacation – an increase from last year’s 31.9 percent.

The option of renting a room dropped to 16.6 percent from 22.6 percent in 2008, while those who claimed that they would stay at a private summer house amounted to 38.6 percent, as opposed to 39.1 percent lat year.

In addition, the overwhelming majority of respondents revealed that they would surely not take out a loan if their finances do not permit them to go on holiday this year. 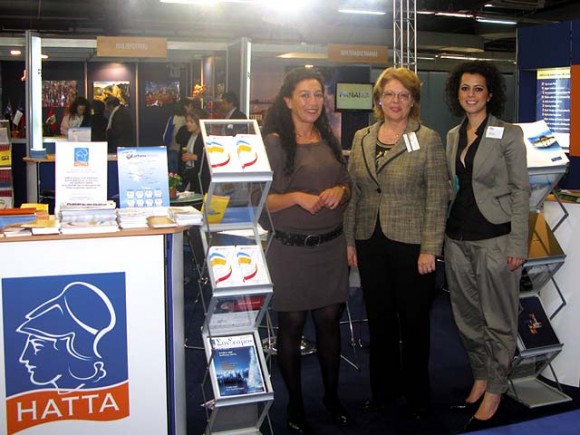 Tatianna Filippa of HATTA, with Lydia Mastronikoli and Dora Sgartsou of HAPCO at the common stand of the two associations.

As for improvements that should be made for Greece’s tourism development the most popular answers were: improved behavior towards tourists and measures for the protection and cleanliness of tourist destinations.

Kapa Research also provided the five most popular destinations for 2009 with the Cyclades group in the lead with 13 percent followed by Peloponissos (11.2 percent), the Ionian Islands (9.4 percent), Chalkidiki (7.0 percent) and Crete (6.6 percent).

Greeks that are determined to holiday away from home amount to 8.9 percent while some 16 percent answered that they have not decided where they will go yet.

A total of 2,231 people took part in the survey, which was conducted in Greece from 27 April to 5 May.

Cyclades – Each Island Is…A World Of Its Own

The Cyclades Island group was set up in one booth, designed and assembled in a central spot of the exhibition space under the management of the Cyclades prefecture. According to the Cyclades Development Company’s manager for tourism issues, Eleni Prochori, the company is in the process of promoting thematic forms of tourism besides the well-known “sun and sea” advantages of the island group.

Lakonia – From Myth Till Today

Greek journalists Chrysafgi Atsidakou and Fotini Makedonopoulou (left photo) presented a series of events on the occasion of the 100 years since the birth of Greek poet Yiannis Ritsos (1909-1990) in Monemvasia. Events included poetry readings, a choir and traditional dances. The Monemvasia Municipality will hold events from 3 June until August in memory of the well-known poet.

This year’s Eurovision hostesses, Greek celebrity personas Mathildi and Betty Maggira (right photo), also known as “The Maggira sisters,” attended the stand of their birthplace, the Xanthi prefecture. They were on call during the first day of the fair and informed vistors and professionals of the beauties and comparative advantages of the prefecture. The prefect of Xanthi, Yiorgos Pavlidis, told journalists that thanks to the development of the Egnatia Odos motorway, Xanthi is an established 12-month tourist destination. 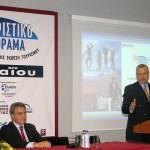 Tourism Minister Kostas Markopoulos during the inauguration ceremony of the 14th Touristiko Panorama. 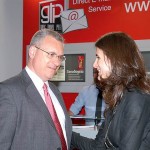 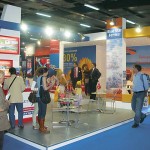 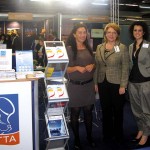 Tatianna Filippa of HATTA, with Lydia Mastronikoli and Dora Sgartsou of HAPCO at the common stand of the two associations. 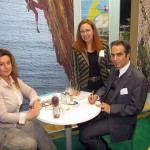 Mary Papadopoulou (Fivos Tours) with Evdokia Vouvali and Nikolaos Papadopoulos (Kalymnos Municipality) at the stand of the Prefecture of the Dodekanissos who informed visitors of the island group's alternative forms of tourism. 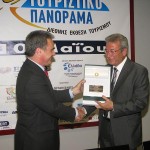 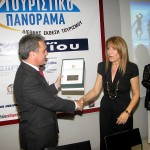 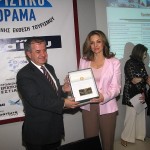 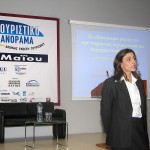 The first session of the forum "Tourism and Culture: in the direction of e-development" was dedicated to e-tourism and Dr. Marianna Sigala, lecturer at the University of the Aegean, gave a presentation on destination management through the Internet and concluded that if we don’t use Internet options we are not optimizing as we are in the era of "net-working or not-working." Ms. Sigala presented tourism product management with examples of Greek and international destination websites. 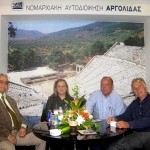 Petros Koutsopoulos (Palladion boutique hotel); Efi Chroni (Argolida prefecture); Yannis Rozos (Best Western Rozos Hotel); and Athanasios Miras (Marialena hotel-apartments) discussed to the global economic crisis at the stand of the Argolida prefecture. Mr. Rozos told GTP that the crisis has not struck Porto Heli at the moment as bookings have risen some 10 percent compared with last year. Argolida representatives, however, claim that the crisis has struck Argolida but on a small scale for the time being. 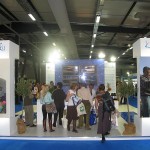 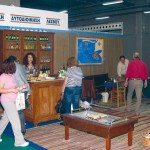 The prefecture of Lesvos promoted this summer's rock festival, which will feature the rock group Scorpions live on 4 July at Mytilini Castle. 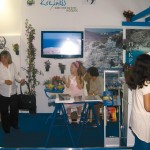 The Ios Island venue gave out information on the Tomb of Homer, the island's sandy beaches and the vibrant nightlife the island is known for throughout Europe. 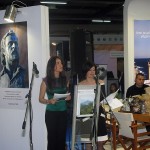 Greek journalists Chrysafgi Atsidakou and Fotini Makedonopoulou presented a series of events on the occasion of the 100 years since the birth of Greek poet Yiannis Ritsos (1909-1990) in Monemvasia. 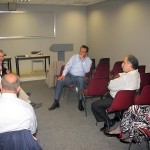 The meeting of the mayors of the 29 areas of developed caves in Greece focused on the creation of a Panhellenic Association of Developed Caves. According to Mayor of Alistrati Yiorgos Mademlis (right-blue shirt), the culture ministry has not adopted rules for the operation and protection of Greek caves and as a result no common line of operation exists. The mayor also spoke about speleology tourism, a form of tourism the GNTO has not included in the new advertising campaign of Greece. 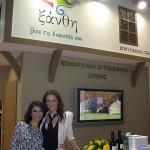 Mathildi and Betty Maggira (right photo), also known as "The Maggira sisters," attended the stand of their birthplace, the Xanthi prefecture.