Athens-Attica Hoteliers Up In Arms 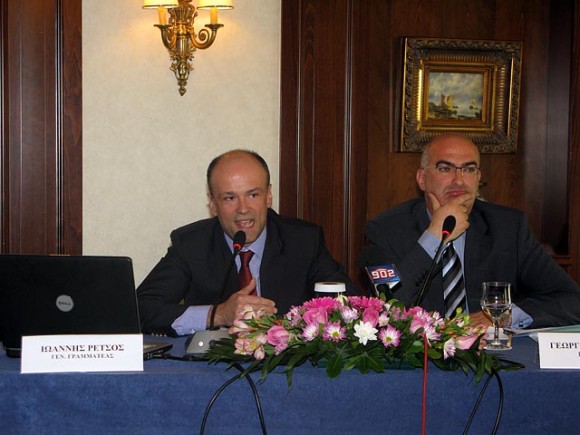 Yiannis Retsos, the new president of the Athens-Attica Hotels Association and the association’s immediate past president, Yiorgos Tsakiris. Mr. Retsos emphasized the need to stop the defamation of Athens as an “expensive” city.

With a drop in the average hotel occupancy rate in the Athens Attica region by 26 percent in January, 13.1 percent in February and 15.7 percent in March, the Athens-Attica Hotels Association called for immediate measures to boost tourism in Greece”s capital.

During a recent press conference the-then president of the association, Yiorgos Tsakiris*, referred to evaluations from the latest study conducted by GBR consulting company in regards to the performance of Athens-Attica hotels for the first trimester of 2009.

According to the association, the impact of the economic crisis will be more apparent on urban and city break destinations than on holiday destinations.

“We estimate a drop in overnights of around 20-22 percent, while the reduction in hotel prices will gradually surpass 10-12 percent, which will result in an approximately 30 percent drop in revenue per room,” Mr. Tsakiris said.

Mr. Tsakiris mentioned that the employment ministry has not responded to any of the association’s requests such as similar measures to the ones announced for the support of seasonal hotels.

Also discussed at the press conference were the chronic “gaps” in the city’s image, such as the lack of promotion Athens receives as a city break destination, the non-existent metropolitan conference center, the cabotage law and the operational hours of museums and archaeological sites.

The association underlined the city’s “biggest problem” to date, which is the insecurity of tourists in the center of Athens due to the increase in thefts, drug dealing and prostitution (e.g. Omonia square, Athinas, Pireos, Tritis Septemvriou streets).

Mr. Tsakiris highlighted that seven hotels in the city center may close down by the end of 2009 as  bookings have dropped due to crime.

* Editor’s note: After the press conference Mr. Tsakiris announced that after six years as president of the Athens-Attica Hotels Association he had decided to step down. Elections were held and a new board of directors was formed: Giannis Retsos, president; Konstantinos Avrabos, vice president; and Alexandros Vasilikos, general secretary. In recognition of Mr. Tsakiris’ contribution to the issues of the hotels of Athens, the association appointed him honorary president.

Tourism Museum In The Works