All Eyes On Global Economy at World Travel Market ‘08 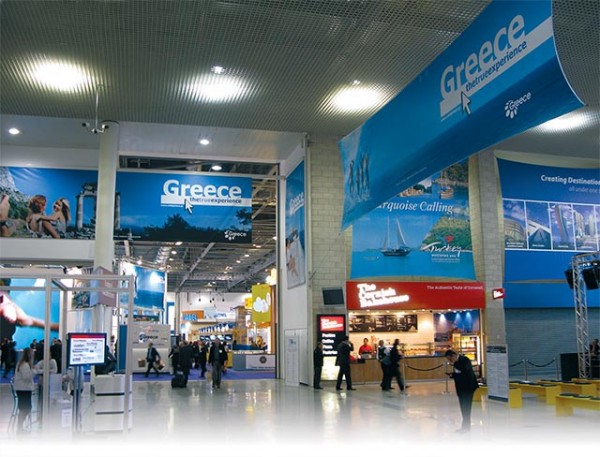 But the wary star at WTM was the global economy.

The fair drew some 45,000 travel professionals and boasted a participation of 5,500 exhibitors.

The four-day travel industry event, held at ExCeL London, once again brought together worldwide buyers and sellers from every sector of the industry, this time, however, amid a global financial crisis.

But the secretary general of the WTM, Francesco Frangialli, claimed that tourism will survive with the support of its own strength.

“There will be no tourism tsunami,” he stressed at the World Travel Market Ministers’ Summit. “We do not need a stimulus package for the industry,” he added. 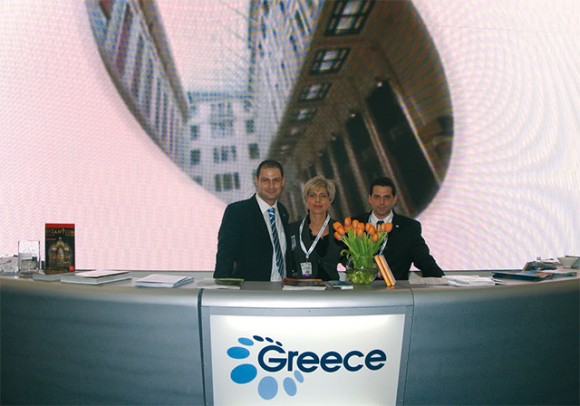 Kiriakos Liolios, information officer for GNTO London; Maria Voidaski, public relations for GNTO Greece; and Giannis Trivellas, conference & incentives officer for GNTO London, at the organization’s stand at World Travel Market. The GNTO offices in London are currently under refurbishment and, according to representatives, are obtaining the image of modern Greece and soon will be ready to respond to modern challenges. “We cannot claim to open towards new market challenges with offices that are extremely outdated and decades behind,” said Tourism Minister Aris Spiliotopoulos.

“When the time comes, tourism will contribute to the revival of the economy as a whole.” Mr. Frangialli added that the outlook for 2008 is not all that negative as international arrivals up to the end of August registered a steady increase of 3.8 percent on an annual basis.

“Whatever happens, there will be positive growth in real terms,” he said.

On the home front, Greece this year presented a new image as a tourist destination at World Travel Market, according to Greek Tourism Minister Aris Spiliotopoulos. He said that over the past year Greece has presented a new image with new aesthetics and a new strategy that moves on two levels.

The second level, according to the minister, is the adaptation of the ministry’s 2009 advertising campaign to digital technology because it is user-friendly, flexible and ecological (www.visitgreece.gr).

The tourism minister hopes to maintain Greek tourism’s share in 2009 at the levels of the year before in the midst of the global economic crisis.

Mr. Spiliotopoulos said that the ministry shows optimism and deep faith in the forces of Greek tourism to cope with the complex economic environment and will move under a strategic plan that will shield Greek tourism and enhance its competitiveness.

In the framework of the minister’s visit to the WTM, he gave a press conference to Greek and foreign media where he underlined that Greek tourism can strengthen the country’s economy and act as antidote to the “toxicity” of the recession. He also referred to the high importance the U.K. market has on Greek tourism.

“The U.K. market is very important for Greece as British visitors offer a great deal to holiday tourism,” he said. “In statistical terms, tourists from the U.K. to Greece over the last six years average 2.6 million arrivals annually.”

Mr. Spiliotopoulos said that for the upcoming season the ministry will invest some 3.5 million euros for the promotion of Greece in the U.K. alone. 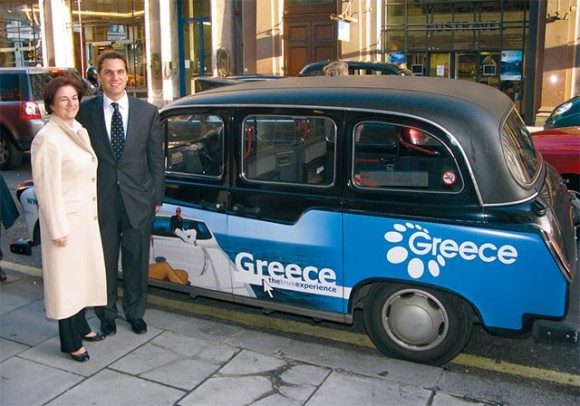 Sofia Vasiliou, GNTO’s general director of promotion; and Makis Peppas, GNTO director for the U.K. & Ireland, next to a taxi cab in London parked outside GNTO London offices. The cab displays part of the organization’s advertising campaign in an effort to attract British visitors to Greece.

This amount comes from a total of some 40 million euros the ministry will spend on next year’s tourist campaign, which again will bear the title “Greece the true experience.”

During the WTM, major travel agents TUI and Thomas Cook predicted that their offices would see an increase in tourists visiting Greece.

The minister also mentioned that some 280 investments that relate to the creation of new hotels with a total capacity of 26,000 beds are in the process to be subjected within the development law.

Journalists were informed that in order to facilitate the tourist wave Greece is examining the possibility of approaching the low-cost company Ryanair to fly at regional airports.

Next year’s WTM will be held from 9 to 12 November. 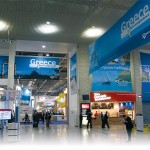 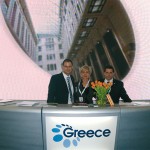 Kiriakos Liolios, information officer for GNTO London; Maria Voidaski, public relations for GNTO Greece; and Giannis Trivellas, conference & incentives officer for GNTO London, at the organization's stand at World Travel Market. The GNTO offices in London are currently under refurbishment and, according to representatives, are obtaining the image of modern Greece and soon will be ready to respond to modern challenges. "We cannot claim to open towards new market challenges with offices that are extremely outdated and decades behind," said Tourism Minister Aris Spiliotopoulos. 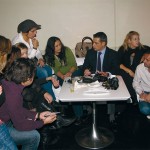 Tourism Minister Aris Spiliotopoulos covers tourism issues with Greek journalists, who accompanied him to WTM, at a cocktail gathering within the framework of the WTM in London. The journalists were informed that a Thomas Cook rep had officially announced that Greece produced an increase in flights of some seven percent in contrast with Spain, which had fell by over five percent. 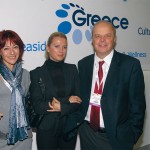 Natasa Korompoki, responsible for the exploitation department of the Tourism Development Company; Lydia Dimopoulou, communication consultant; and the company's CEO, Prof. Harry Coccossis, at the GNTO stand. The company will organize a conference in Athens on "Green Tourism" on 23 January 2009. 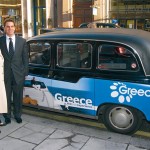 Sofia Vasiliou, GNTO's general director of promotion; and Makis Peppas, GNTO director for the U.K. & Ireland, next to a taxi cab in London parked outside GNTO London offices. The cab displays part of the organization's advertising campaign in an effort to attract British visitors to Greece. 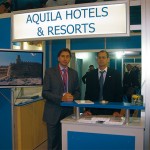 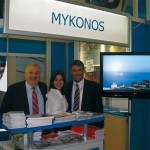 Athanasios Kousathanas-Megas, vice mayor of Mykonos; Mandalena Kambouroglou, hotelier of San Antonio Summerland on Mykonos; and Andreas N. Fiorentinos, president of the Hotelier's Association of Mykonos, at the island's stand at the WTM fair. Conde Nast Traveler announced that Mykonos was voted "Best European Island" for 2008 according to its 21st Annual Readers Choice Awards. 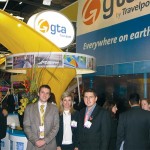 Evan Panagopoulos, hotels division contracts manager of Gullivers Travel Associates-Travelport; Elena Vourli, group sales executive; and Tim Dyer, group reservations assistant manager business analysis & sales support. GTA by Travelport is one of the world's leading wholesalers of hotels, ground products, group travel arrangements and services to the travel industry. Among GTA's plans for 2009 is the promotion of China as a group destination. Travelport (see page 16) is one of the world's largest, most diverse networks of travel brands and content, and a premier provider of travel technologies, solutions and services.