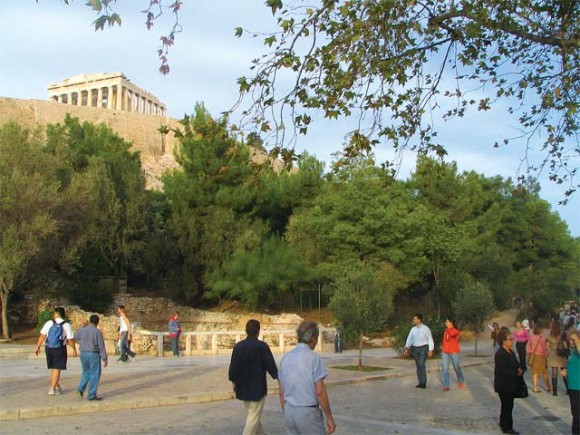 The Acropolis was closed, during the weekend of 21-22 July, due to the Panhellenic Union of Staff for the Guarding of Antiquities’s strike.

The Hellenic Association of Travel and Tourism Agencies recently raised concerns over the continued strikes of employees at archeological sites in Athens. It fears the strikes create a negative image of Greece and will have severe repercussions if the strikes continue during the summer peak season.

The negative result of the strikes is already evident as a significant number of tourists were forced to cancel their programmed visit to the Acropolis that was closed last weekend, notably some 4,000 passengers of cruise ships.

The decision to close the Acropolis during the weekend of 21-22 July was taken by the Panhellenic Union of Staff for the Guarding of Antiquities as an act to protest against low pay and demand more financial benefits from the Ministry of Culture.

HATTA acknowledges that the archeological sites of Greece provide a major tourism attraction and remain a primary reason for any tourist who chooses to visit Greece hence this act has a ripple effect on tourism throughout Greece. Cancellations have already been noted due to the expected strikes and, according to Mr. Evangelou, “unless an immediate solution can be found, there will certainly be mass cancellations of individual and package tours that will financially damage many Greek tour operators who will be forced to pay compensation charges.”

The Association of Greek Tourist Enterprises (SETE) also expressed its concern for the strikes with a formal letter of complaint to Culture Minister Giorgos Voulgarakis where it outlined its opinion.

With reference to the significance of the Greece’s archeological sites, the association said: “Travelers from all corners of the globe begin their journey to Greece to fulfill a dream, that is, to visit our beautiful monuments.” It continued to express its concern over the recurrence of the strikes “particularly this year when Greek tourism is increasing and shows positive results.”

The association claims “the weakness of the state in dealing with these strikes creates disappointment to many visitors and causes irreparable damage to the image of Greece.”

It proposed that archeological sites should open as planned throughout the summer peak with the use of skeleton staff, and asked those responsible to act immediately on this matter.

According to the president of the union, Kostas Economou, “we respect the concerns of the travel sector but we do not have a choice since we expressed our demands more than eight months ago and have yet to see any results.”

Financial Aid for Promotion of Kefallonia