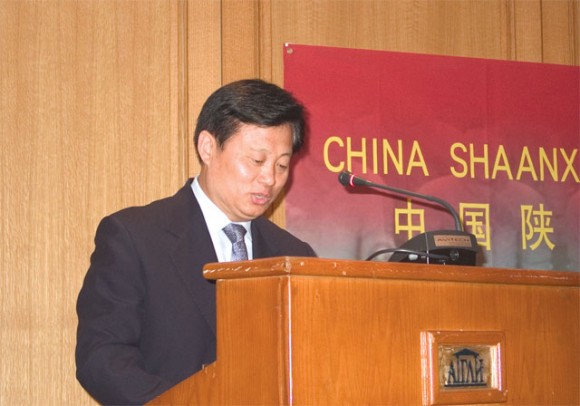 Mr. Xianmin compared the significant ancient civilizations and long histories of both China and Greece. He said that tourism is a way to advance friendly relations between the countries, and an opportunity for mutual growth and prosperity.

“More Greek tourists are arriving in Shaanxi,” continued Mr. Xianmin, and “Chinese tourists are eager to visit Greece, one of the most popular tourist destinations in the world.”

Shaanxi Province is located in the heart of China and has a population of about 37 million. Xi’an is the province’s capital, and also the earliest capital in China – serving as the capital for 13 dynasties from the 11th century B.C.

For about a thousand years, Xi’an was China’s political, economic and cultural center, comparable in importance to the ancient capitals of Athens and Rome. Xi’an also was the starting point of the famed Silk Road.

Visitors can learn more about Shaanxi Province’s long history through the wealth of museums, historic sites and antiquities. Perhaps the most well known museum is the one dedicated to the Qin Terra-Cotta Warriors and Horses, a UNESCO world heritage site, where life-size sculptures of an army 8,000 strong were uncovered.

Other museums are the Shaanxi History Museum with 113,000 artifacts dating from pre-history through 1840, and the Stele Forest Museum with about 3,000 calligraphy-inscribed tablets. Historic sites include mausoleums dedicated to imperial families, Buddhist pagodas and temples, the Ming dynasty city wall and towers, the Banpo ruins from the Yangshao culture, the Mosque on Huajue Lane, and the Shuilu Buddhist convent with China’s best-preserved clay sculpture.

Visitor’s can also enjoy the province’s many natural features such as the great Yellow River, the Qinling Mountain range, and the forest parks of Wangshunshan and Zhuque.

The region has many excellent hotels, while the international airport, railway, good roads and buses make transportation easy.

“Shaanxi may seem like a faraway, sacred and mysterious place, but if you wish to know Chinese history, or to see the grand mountains and rivers of China, or to experience Chinese traditional folk customs, or to cherish the modern achievements of China’s western region, it is a place that you should not miss,” concluded Mr. Xianmin.