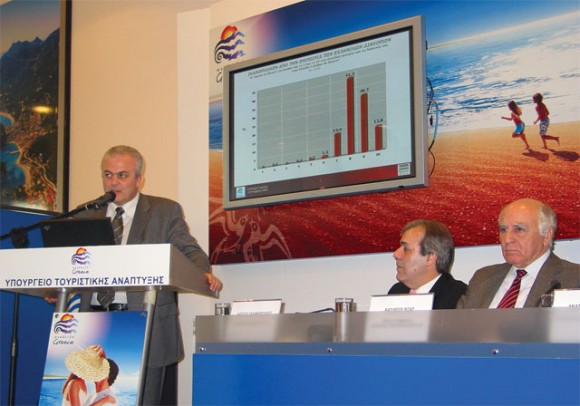 Dimitris Mavros, president of MRB Hellas releases data from a recent study carried out by the company for the Hellenic Tourism Organization.

Although unable to produce accurate data, last month the country’s tourism development minister, Dimitris Avramopoulos, estimated that tourist arrivals last year rose by 16 percent against 2004. He said the estimate comes from data supplied by the Hellenic Tourism Organization’s offices abroad and added that initial data from the same offices show a further 10.35 percent rise in arrivals for this year (see table below).

The minister then referred to data by the Institute for Tourism Research and Forecasts, which show final revenues from tourism in 2005 would rise by 16 to 17 percent, when compared with 2004 tourism revenue. But he explained that the data is just an indicator, as there is no official index for tourism traffic.

He also said Hellenic Tourism Organization’s 24 offices abroad now act like small headquarters for tourism development. For example, he said the London office works on the promotion of tourism investment opportunities in Greece and the development of alternate forms of tourism, the Paris office becomes the center for Greece’s cultural tourism, Milan concentrates on realizing EU programs for tourism, Frankfurt is the center for group tourism, and the Copenhagen office is responsible for long-term tourism development.

During the same press call, MRB Hellas released its study carried out by the company for the Hellenic Tourism Organization. The study found that tourists visiting Greece appear to be almost entirely satisfied with the country. Some 97.2 percent of respondents expressed their satisfaction with their holidays in Greece while 98.9 percent said they would recommend the country as a holiday destination.

A considerable 44.3 percent of those polled found everything satisfactory during their stay. Those that did not find everything satisfactory mostly resented the high prices in food, accommodation and/or entertainment, as well as road safety and the taxi sector. Nonetheless, the poll showed that 52.7 percent of tourists considered their holidays much better or better than expected, while some 77 percent said they would consider returning to Greece for holidays.

The quantity research project was carried out between September 9 and October2 of last year at Greece’s four major airports (Athens, Thessaloniki, Heraklion, Rodos) and the international seaport in Patras.

Major Rise in Visits to Greek Museums and Sites