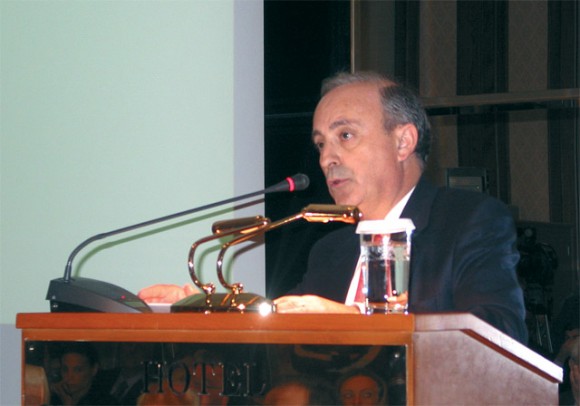 Vasileios Xenikakis, president of the Mont Parnes Casino, explains changes being made to the casino complex.

At a press call last month, executives from the Mont Parnes Casino complex outlined the many changes that have taken place and that are underway at the complex. Owners intend to invest more than 110 million euros in renewal projects.

Hyatt Regency Casino, which manages and owns 49% of the complex, said the initial first phase of the investment program, at a cost 19 million euros, has been completed. The project included the renovation of the present casino premises and the replacement of the unit’s mountain cable car system. Reconstruction of the cable car system began with a 12-million-euro investment to replace the site’s entire system with ultra-modern 20-person cabin units that are capable of transporting 2,000 people an hour compared with the old system that carried a maximum of 280 passengers an hour. The new system, one of only eight such in the world today, is said to be the most modern and most safe system in Europe.

But while the cable system is there to stay, the casino renovation project undertaken is but a temporary measure as the company intends to rebuild the resort from scratch.

Present renovations were under the supervision of the same designer who oversaw the radical renovation of the historical Grande Bretagne Hotel.

By the end of 2007, Mont Parnes will be trans-formed into a new 91-room luxury resort hotel complex, which will include 22 suites, a modern spa and a new casino. All rooms will have a 180-degree view of the capital city below from the top of Mount Parnitha, the highest mountain in the Attica area.

Mont Parnes is 51-percent-owned by the state with the remaining 49% being controlled by Hyatt Regency.