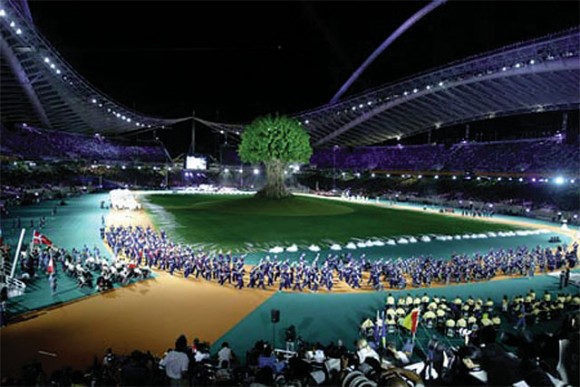 In the center of the sold-out stadium was a realistic-looking 26-meter tall plane tree made of Styrofoam, which symbolized strength and longevity.

The biggest and what appears to be the best Paralympic Games in history began in style last month as fireworks and illuminations lit up the Olympic Stadium during the opening ceremony. In the center of the sold-out stadium was a realistic-looking 26-meter tall plane tree made of Styrofoam, which symbolized strength and longevity. It and the stadium were bathed in light as the Angolan team led the parade of athletes before the Flame was lit and dignitaries made their speeches.

The Flame arrived at the Olympic Stadium in Athens after having completed its journey from the port of Piraeus. Some 680 torchbearers carried the flame through 54 Attica municipalities, covering a distance of 410 km.

“The Games that we open tonight are more than just a great sports competition. They are a global celebration of strength and beauty, of diversity and inclusion,” said Gianna Angelopoulos-Daskalaki, head of the Athens 2004 organizing committee – this marks the first time in the history of the Paralympics that the structure of the organizing committee has remained the same as during the Olympics.

Organizers said they had sold well over half of the 500,000 tickets available before the opening ceremonies and that they hoped to sell even more after a poll released a day before the Paralympics found that 79 percent of Greeks questioned were very interested in attending. (The 12th Paralympics saw a record 3,846 athletes from 136 countries competing in 19 events.)

And although infrastructure here has never been friendly toward the disabled, the Paralympics has forced the city to change and has helped citizens alter their perceptions. Athens has spent approximately 18.5 million euros upgrading its disabled facilities. The “remodeling” of downtown Athens to facilitate the handicapped, and the fostering of a greater sensitivity toward disabled people, may leave Athens with a significant legacy.

“We were determined that the venues and facilities in which you compete and the level of service provided would be the best in the world, and we are proud of what we have achieved,” Ms. Angelopoulos-Daskalaki said in her opening ceremony speech.

“After you leave, Athens will remain a better city for all of its citizens and we thank you for showing us the way,” she said.

Yiannis Vardakastanis, president of the European Disability Forum, during an interview with a press agency, said: “People with disabilities have never been more visible in Greece. I am convinced that after the end of the Paralympics, Greek society will have a different attitude toward them.”

Meanwhile, Athens Mayor Dora Bakoyannis, during a press call last month held at City Hall just prior to the Athens 2004 Paralympic Games, said “the Paralympics, to be sure, have accelerated change. They have motivated us to not only alter our perceptions but also certain everyday realities. We are working to make Athens accessible to all, a city where everyone is welcome and respected, a city that everyone can enjoy,” said.

Mayor Bakoyannis also spoke about city’s social policy development and initiatives for people with disabilities, as well as about the City’s arts and cultural program organized for the duration of the Paralympics.

She also outlined the city’s policy for development and initiatives for people with disabilities – Greece has about 1 million such citizens, 10% of its population, with about 35% of the total within the greater Athens regions. Another 40% of the general population has some kind of movement difficulty.