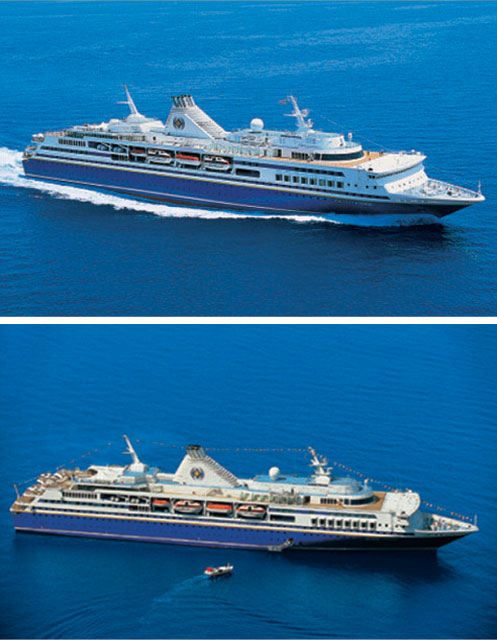 Royal Olympia Cruises, Greece’s only international player in the sector, has been forced by creditors to auction off its two star vessels, Olympia Voyager (launched June, 2000) and Olympia Explorer (launched April, 2002).

The cruise line hopes to lease the vessels from the new owners during August so as to honor its agreement with Athens 2004 for hospitality berths.

The subsidiary companies that own the cruise line’s two leading vessels, which were immobilized in a U.S. port just before Christmas, had been forced then to file for Chapter 11 bankruptcy protection. The acts came as a result of legal action from German creditors who claimed the company had not submitted a debt-restructuring plan for a $250 million loan.

A third Royal vessel, the Olympia Countess, faced a similar problem in South Africa last month and a fourth, the Triton, confronted the same if it had docked in Athens last month as planned.

Nothing to date has been heard regarding the remaining four shipowning companies of Royal Olympia Cruises.

For the moment, Royal Olympia said it continues negotiations with German bank KFW over the $250 million loan it received for the purchase of its two star vessels Olympia Voyager and Olympia Explorer from German shipyards Blohm+Voss.

According to sources, KFW has not accepted a Royal debt restructuring plan as it considers the cruise company’s business plan not a viable one due to management flaws, and is pressing for repayment.

The cruise line, for its part, counters that its vessels, which have been 95% booked by Olympic Games organizer Athens 2004 for the month of August, have achieved almost 100 percent capacity utilization in both its European and U.S. operations.

It adds, however, that the September 11 events and the ensuing generally unfavorable circumstances in the global economy have prevented the company from following the economic policy it would have wished.

The German bankers appeared unconvinced. They maintain that Royal Olympia’s financial woes are due to its operating structure, its excessive number of employees, the high cost of the Greek shipping register and its failure to tap the two ships’ main advantage, which is speed (they are said to be the fastest cruise ships in the world today).

According to the sources, KFW had drawn up an alternative operating plan for the two cruisers. It had invited Andreas Potamianos, one of Royal’s owners (Cyprus’s Louis Group holds 51.4% of Royal’s shares) who was responsible for the choice of vessel, to discuss a different corporate scheme, free of the company’s liabilities.

All this has to be finalized within 60 days, as Royal Olympia, which is listed on the New York Stock Exchange, has filed for bankruptcy under Chapter 11 and, as such, is afforded this period to reschedule its debts.

The company said in a release that it “has exercised its legal rights in the U.S. and is negotiating a viable solution.”

Mr. Potamianos last month discussed the problem with Merchant Marine Minister Georgos Paschalidis, who, responding to questions later, said the issue was a bank dispute but that efforts will be made to find a viable solution to secure Royal’s approximately 1,500 jobs. KFW insists that the loan could be repaid if appropriate marketing and management policies are applied.

Meanwhile, the cruise company’s Olympia Countess, with 423 passengers on board, was barred from leaving Africa’s Durban harbor after at least two creditor companies filed papers in a local court for orders of arrest against the ship and its Greek owners, Royal Olympia Cruises.

A fourth Olympic cruise ship, the Triton, made news last month when passengers were forced to transfer from the cruise ship to a car ferry in mid-cruise. The Triton faced arrest if it docked in Athens, the next port of call. Instead, the passengers were taken to Venice for a five-hour bus ride to Genoa to catch their flights home.

Although Royal Olympia Cruises has recorded losses of $50 million for the past two years, this is not the first time the company has had financial difficulties. Greece’s tourism sector says the Potamianos family has gotten out of tight positions before and will likely do so again.

More than 2.6 million people took a cruise during the third quarter of last year, according to the international association of cruise companies.

For the first nine months of last year, some 7.2 million people took part in a cruise and more than 6 million of these were Americans.

The association says all indications show that the total for 2003 will reach the forecasted 9.6 million passengers worldwide.

The data for the first nine months shows there was a cruise passenger increase of 8.92% on an international level when compared with the figures for 2002.