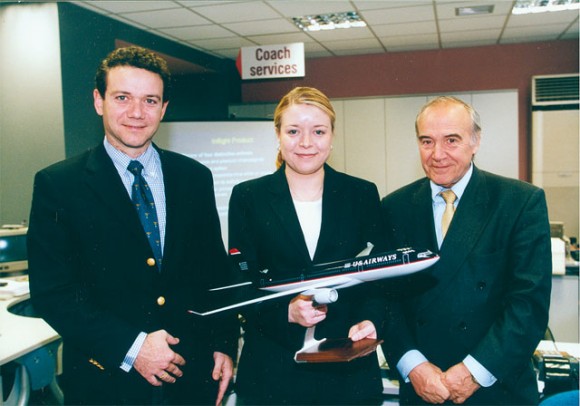 In today’s difficult climate most companies attempt to cut costs to the bone and downsize as much as possible. But not Amphitrion Holidays, which is one of the country’s biggest and most successful tourism enterprises. Its most recent expansion activity was to open a new airline representation office and to increase the number of airlines it represents here with the addition of US Airways.

The new storefront office of Amphitrion Air Services on Syngrou Avenue, says Dinos Mitsiou, managing director of the Amphitrion Group of Companies , has as its major aim “to continue to supply the high level of quality services we offer to our customers as a airline company representative.”

Its newest member, US Airways, is the America’s seventh largest airline and serves nearly 200 destinations in the U.S., Canada, Mexico, Europe and the Caribbean regions. Although the airline had filed for Chapter 11 protection on Aug. 11, 2002, it has committed itself to a fast-track reorganization that targets the company’s emergence from bankruptcy protection on March 31, 2003.

Most of its route network is concentrated in the eastern U.S., where it is the largest air carrier east of the Mississippi. It employs approximately 33,000 people and operates a fleet of 279 mainline jet aircraft. US Airways and its US Airways Express partner carriers operate more than 3,400 flights per day.

Separately, in light of the current situation, US Airways was one of the first to announced that it has introduced a “Peace of Mind” flexible travel policy to ease customer concerns about making advance reservations during this period of potential conflict in the Middle East.

This means that in the event of military action and/or a Homeland Security Department issuance of a “code red” alert, the “Peace of Mind” flexible travel policy will allow customers to make changes to previously booked travel itineraries without incurring standard change fees.