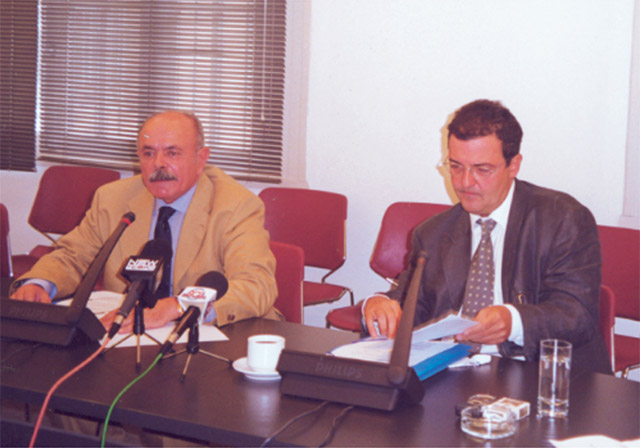 Stefanos Hatzopoulos, the newly government-appointed chairman of the board for Hellenic Tourism Properties, and the Tassos Homenidis, the company’s managing director.

After sitting quietly since its inception some two years ago, the holding company formed to manage the Hellenic Tourism Organization‘s extensive list of properties seems ready to enter a new phase. At a recent press call to present the company’s new chairman, Stefanos Hatzopoulos, the first step in the new phase is to upgrade Attica’s state-operated marinas and organized beach properties with a 150-billion drachma investment program.

Greek Tourism Properties (ETA), under its managing director, Tasos Homenidis, formulated the package in line with a strategic plan of short-, medium- and long-term goals.

So far, some 300 sites have been passed into the hands of the firm, which is still in the process of making an inventory of the assets, many of which are located on prime property throughout Greece.

Among these are 46 hotels, marinas, beaches, the Parnassos ski centre, 11 campsites, spa therapy facilities, two casinos, three caves, restaurants, canteens and kiosks. Mr. Homenidis said the cataloguing, which comprises the first phase of activities undertaken by the company, would be completed once financial advisers have been appointed.

Mr. Homenidis outlined the financial results of various units and the initial analysis confirms that the majority of facilities are rundown, outdated, loss-making and problematic in legal terms. He pointed out that the casinos are the only profitable units but that the Parnitha casino is in desperate need of modernization, particularly after the damage suffered during the 1999 Athens earthquake.

In reference to the poor state of services supplied by tourism organization businesses, Mr. Homenidis made a comparison of marinas in Attica with those in California. This showed that the Greek facilities offered sailing enthusiasts just three or four services out of a list of at least 15 that are provided in the U.S.

But even though this shows private companies can offer more to the consumer, the managing director hinted that all marinas would remain in government hands. His response to the need of more berths at marinas in order to meet increasing demand was to eliminate such problems as the docking of non-recreational vessels at these marinas.

Attica has 2,300 berths and requires some 1,200 more so as to meet the anticipated requirements of the next decade, he said.

As for the Parnitha casino, Mr. Homenidis said that an administrative body must be set up to oversee the immediate modernization of the entire site, encompassing the hotel, while the workforce should be better organized and facilities such as ATMs need to be installed.

Following closely on the heels of Attica redevelopment are plans for similar renewal in other parts of the country including Agii Apostoli on Crete, Afandou on Rodos, Chalkidiki and Thrace.

“The prospects are great but the work required will be difficult. There must be a coordinated effort between the tourism industry, the competent ministries, local authorities and the company itself,” said Mr. Homenidis, who underlined the close working relationship the company shares with the Hellenic Tourism Organization’s general secretary, Evgenios Yiannakopoulos.

The second phase of the strategy also will involve detailed evaluation of the properties in order to determine which can be redeveloped while proposals for the actual works are to be submitted in the third and final stage.