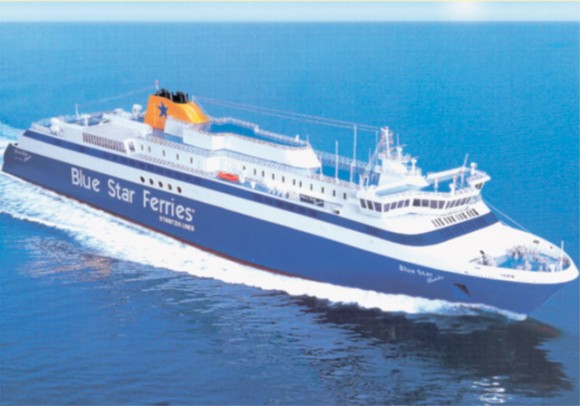 Strintzis lines accepted its newest super-fast ultra-modern ferry the Blue Star Ithaki, which will be the first of its type to ply Greek coastal waters.

At its recent general assembly, Greek ferry line Strintzis received approval to increase its capital by almost 28 billion drachmas through the issuance of new shares. The funds will be used in part to pay for the company’s new investment program that is expected to surpass 100 billion drachmas.

The program includes the purchase on new vessels and the possible purchase of majority shares in other Greek ferry lines.

In the meantime, Strintzis lines accepted its newest super-fast ultra-modern ferry the Blue Star Ithaki recently from the Korean shipyard Daewoo Heavy Industries. The new vessel will be the first of its type to ply Greek coastal waters.

Shortly, Strintzis will accept delivery of the new high-speed ferries Blue Star 1 and Blue Star 2 from Holland’s shipyard Van Der Giessen de Noord. The first new vessel will ply the Patras-Brindisi route in nine hours and the second the Patras-Ancona route in 21 Hours.

As well, Hellenic Shipyards speeds ahead with construction of the line’s new Blue Star Chios and Blue Star Mykonos. Construction should be completed on the first by next February and the second by May of next year. Both vessels are being built especially for Greek coastal waters and promise to bring new, high-class service and unheard of speed to domestic sailing. Separately, Strintzis Lines says it increased profits posted for 1999 by 27% when compared with the year before. Net profit reached more than three billion drachmas and revenue reached 26.8% billion drachmas, which was come 10,5% higher than that of 1998.

The Greek ferry line holds third spot in market share of Adriatic routes with total number of passengers carried reaching well oven 409,000. On its domestic routes, the line carried almost 1.5 million passengers, on 17% more than the year before.

Festival And P&O To Join Forces