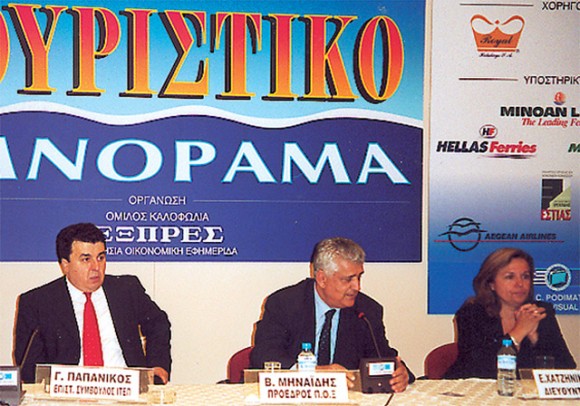 Vassilis Minaidis (center), president of the Panhellinic Hoteliers Federation, told Panorama professional quests that the government should provide investment incentives and subsides toward the construction of new high-standard hotels in “new” tourism districts of Greece.Up until now, the federation had made it know generally that it did not want to see any more hotels built.

This year’s domestic fair, Panorama 2000, held last month at the Peace & Friendship Stadium, proved to be the biggest, the best and the most successful to date. “It was not only the size and the well-designed stands that made this year’s fair so impressive,” said one seasoned exhibitor, “but also the caliber of visitors, both from the professional side and the consumer side.”

According to Kappa Exhibitions, the fair’s organizer, the number of visitors to Panorama 2000 was much higher that seen at any of the other four annual fairs held. 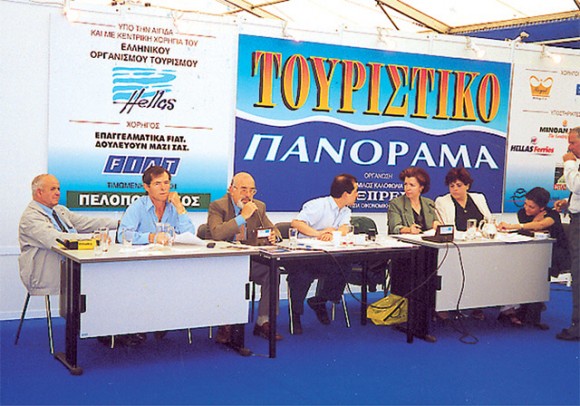 Stelios Polykratis (third from left), president of the Federation of Rented Rooms and Apartments in Greece, told Panorama professional visitors that some 150,00 beds in rented rooms throughout the country will operate this year without having passed the required check by the National Tourism Organization.

Exhibitors and co-exhibitors totaled almost 400, while the number of stands reached a record 280. Both the style and management of the fair was up to international levels. Stands that represented regional authorities and prefectures were particularly well done.

Besides the representatives of regions throughout Greece and the tourism’s private sector, for the first time Panorama featured a handful of outside destinations, such as Tunisia and Cuba.

Local tourism authorities and private enterprise welcomed visitors to their imaginatively-presented, and often traditionally-decorated stands that were filled with tempting specialties – a sweet invitation to experience their hospitality. The spotlight this year, however, fell on the diverse Peloponissos region of southern Greece.

Alternative tourism appeared to be a major drawcard this year, with several companies presenting travel packages that combine activities such as hiking, horseriding and rafting. Younger vacationers, particularly students, representing as physically active, health- conscious generation of Greeks, expressed special interest. Regional authorities and tourism promotion   boards have printed lively pamphlets informing of wide range of thematic travel options available along with the wildlife and natural environment, much of it unique, that can viewed and enjoyed in each are. At Nestos River, for example, in the northern prefecture of Xanthi, nature-lovers can see detailed perspectives of various sections of the waterway via video camera, without disturbing the environment.

Greek Tourism Organization (EOT) general secretary Evgenios Yiannakopoulos, who opened the fair officially, said he expected 2000 would prove a record year for Greek tourism after 1999 arrivals rose by 11 percent, despite the problems brought on by the Yugoslav war. 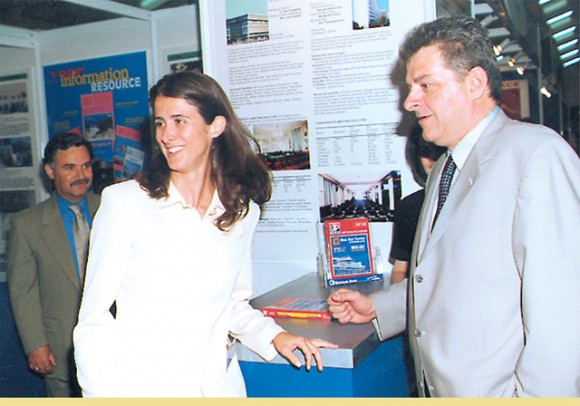 He emphasised that arrival figures should not be viewed as the single most important factor but rather efforts to increase the average expenditure of tourists abroad.

Mr. Yiannakopoulos said the next 10 years would be the “decade of Greek tourism” as major changes will occur in the sector while the Athens 2004 Olympics should also boost the country’s image.

Development Minister Nikos Christodoulakis pleased everyone present at an official dinner co-organized by the panhellenic hoteliers’ federation for the fair when he said Greece’s tourism industry should no longer be considered a “prop” to be taken advantage of, but rather represents a strong arm of the country’s strategic economic policy. He expressed a farsightedness and ambitiousness in government policy on tourism not seen in decades, according to press reports that followed. Mr. Christodoulakis also proposed the creation of an “Olympic tourism package” as part of the planning process of the Athens 2004 Games.

In reference to the distribution on Third EU Community Support Fund monies, he said a unified business plan would be designed covering all sectors, under the title “Competition and development,” with one industry able to assist the other where needed.

Minister Christodoulakis also underlined the importance of the single currency to European citizens and the changes it will bring to currency exchange while stressing that Greece should present a positive image on the international geopolitical stage. 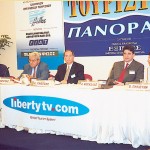 A presentation by Liberty.com Greece showed that travel agents have yet another competitor. Besides being a Paneuropean satellite station to present tourism destinations and cheap advertising, Liberty has an Internet site and an eight-language telephone center capable of booking travel, lodging and tourism packages advertised. 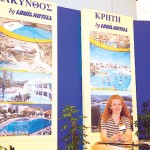 Louis Hotels' representative Maria Roumeliotis reminded that the Louis Group’s most recent expansion project for Greece concerned the new Athens International Airport at Spata. The group’s catering division won the rights to set up a Greek restaurant, an Indian restaurant, a pastry shop, a health food restaurant, a coffee shop and an Irish been pub within the airport. 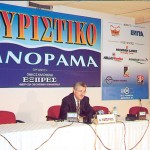 Peloponissos, the honored prefecture at this year’s Panorama, will invest 50 billion drachmas within the next few years to develop its tourism infrastructure, said the prefecture’s secretary general, Antonis Matsigkos. In the past few years, he said, the prefecture has invested 30 billion in infrastructure works, mostly road and port works, but also works on traditional buildings and historical villages. 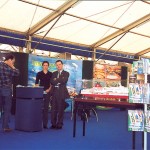 Minoan Lines says it will place its subsidiary companies Forthnet and Minoan Flying Dolphins of the Athens Stock Exchange this year. The Dolpin subsidiary is the world’s largest such company. 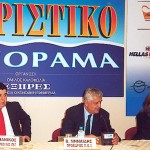 Vassilis Minaidis (center), president of the Panhellinic Hoteliers Federation, told Panorama professional quests that the government should provide investment incentives and subsides toward the construction of new high-standard hotels in “new” tourism districts of Greece.Up until now, the federation had made it know generally that it did not want to see any more hotels built. 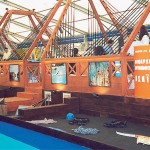 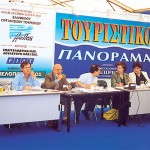 Stelios Polykratis (third from left), president of the Federation of Rented Rooms and Apartments in Greece, told Panorama professional visitors that some 150,00 beds in rented rooms throughout the country will operate this year without having passed the required check by the National Tourism Organization. 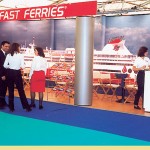 Superfast’s chairman, Pericles Panagopoulos, said he will participate in the capital increase of Strintzis Lines’ which was announced during Strintzis Lines’ recent general assembly and Superfast will then control 40,6% of the company. 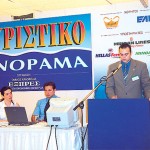 Airlines Services Training (AST) director Constantine Hadjigeorgiou presented a new tourism training program comprised of four levels, starting of foundation and ending in management. He said the programs were suitable for anyone working in the tourism sector and that they enable interested parties to gain skills directly applicable to the needs of the market. Over the past 25 years more than 200,000 individuals have undertaken the IATA-UFTAA training programs like those offered by AST, which was founded here in 1970. 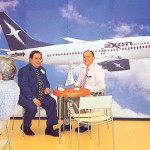 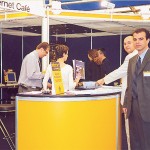 Dimitris Gallopoulos (right), Forthnet’s product manager, presented a new system for Internet use within hotels and Internets Cafes. The system uses a card, similar to a telephone card, that can be inserted into a small box connected to a computer. The card holds any amount of computer time on the Internet and it can be sold by the hotel or cafe and used until the time has expired. 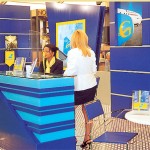 Small but powerful private Greek carrier Galaxy Airways was just one of the 280 companies that set up a stand at Panorama 2000. Its impressive stand pulled in a majority of professional visitors interested in using the airline’s services, rather than tourism consumers. This year, the company expects to post revenue of 10 billion drachmas, compared with some five billion posted last year. 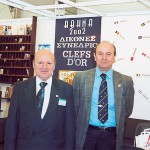 Golden Key Hellas (Clefs d’or) members were proud to announce their association will host the 49th International Congress Clefs d’or in Athens from February 9 to 14, 2002. The association represents hotel reception executives and expects more that 700 fellow executives from around the world to attend the 2002 congress. 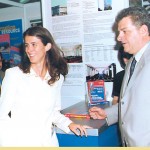 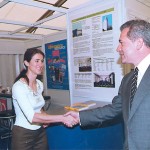 GTP’s Maria Theofanopoulos welcomes the mayor of Athens, Dimitris Avramopoulos, to Panorama 2000 and to the Greek Travel Pages’ stand.