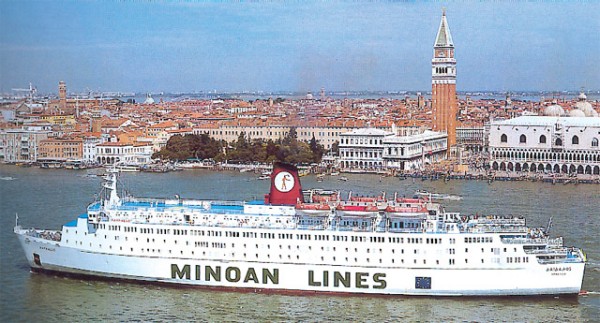 Crete-based ferry operator Minoan Lines announced a substantial increase in pre-tax profits for 1999. Minoan said last year’s revenue was up 7.1% against the year before and profits before taxes were up 65.5%.

It also outlined expansion activities carried out last year. The company had arranged bank loans worth 250 million euros to be used toward the purchase of four of seven new ferry vessels ordered. The total orders are estimated to cost 645 million euros.

Company executives reminded that Minoan purchased 43 vessels from competitors as well as the purchase of a 46% stake in GA Ferries and a 28% share of Greece biggest private airline, Aegean Airlines.

Within markets the ferry line operates, the group said it held onto its lead even though the Kossovo crisis dampened sales on Adriatic routes.

On its Ancona-Venice routes, Minoan carried 44.5% of all passengers, while on its Piraeus-Heraklion and Heraklion-Thessaloniki domestic routes the ferry line carried 76.8% and 87.6% respectively of all passengers.

For 2000, Minoan expects fiscal revenue to reach 45.8 billion drachmas, a 5% increase over the year before. Earnings before depreciation for this year will reach 20.3 billion, according to company executives.