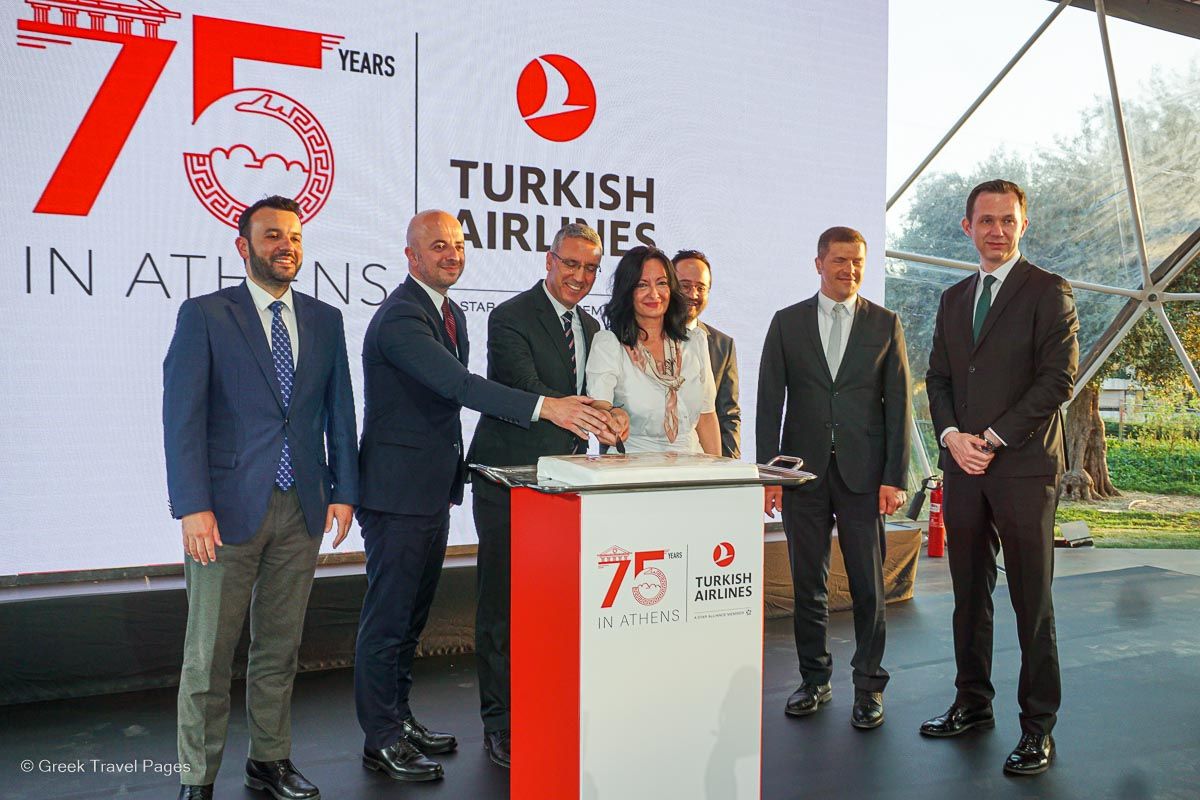 Turkish Airlines on Wednesday celebrated the 75th anniversary of its first flight to Athens, Greece – the first time the carrier carried its national flag on international skies – from Turkey.

“The first international flight was operated on February 12th, 1947, from Ankara to Athens with a stop in Istanbul. As a milestone, that flight represents the establishment of scheduled international flights, since then Turkish Airlines has been reached a network including 329 destinations in 5 continents,“ Turkish Airlines Chief Marketing Officer Ahmet Olmuştur said. 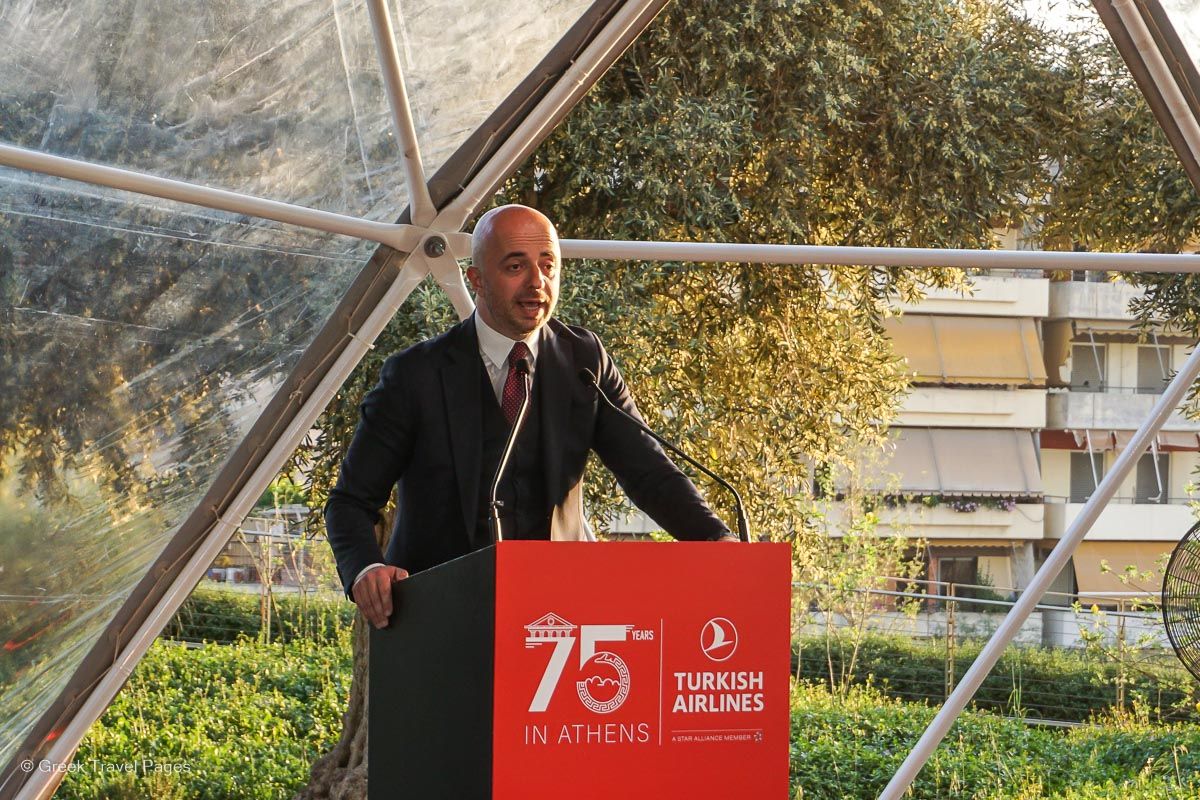 Addressing tourism industry representatives, travel agencies and journalists during an event at the Dome of the Stavros Niarchos Foundation Cultural Center in Athens, Olmuştur added that Turkish Airlines today operates in 128 countries from its new home, Istanbul Airport, with a young fleet of 370 aircraft.

“We strive to further develop Athens and Thessaloniki both as global destinations and as gateways to the beauties of Greece. We do not only transfer passengers but also culture and values, which is highly important for us,” Olmuştur added. 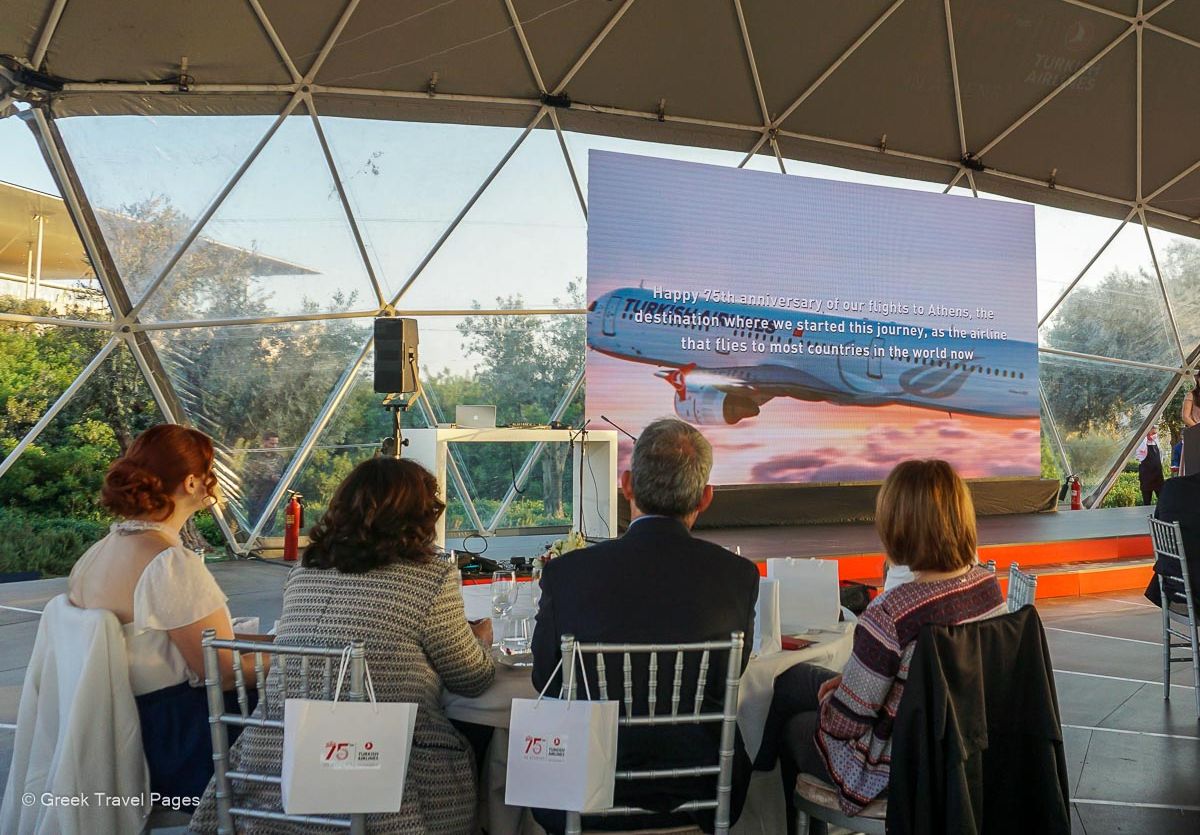 Operated with DC-3 type aircraft with TC-ABA tail number, the first international flight of Turkey’s flag carrier departed from Ankara on 12 February 1947 at 10 am and after a stop in Istanbul, it continued to Athens Airport which, back then, was known as Hassani Airport in Hellenikon.

Following the opening of Athens International Airport (AIA) in March 2001, Turkish Airlines has carried some 5 million passengers on 37,000 flights to the Greek capital. 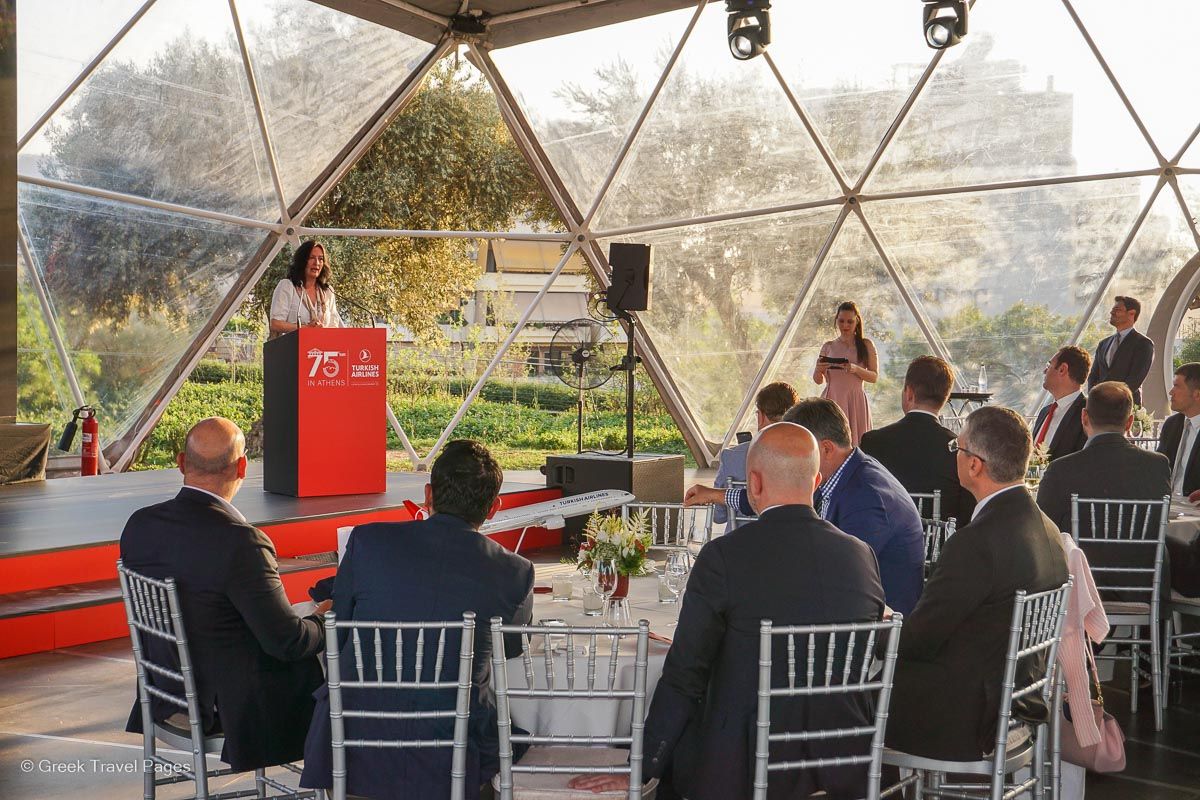 “Within these 21 years of operations, Turkish Airlines has been a story of success, development and growth… The Athens-Istanbul route is a very strong one and is chosen by travelers both for leisure and for business,” she added.

According to data by AIA, 13 percent of Turkish passengers on the Athens-Istanbul route travel for business, 78 percent for leisure (holidays) and 9 percent to visit relatives and friends.

Following the Covid-19 pandemic which brought airlines to a halt from the second quarter of 2020, resulting in passenger traffic and revenue losses across all regions, Turkish Airlines is making its comeback.

According to Papadopoulou, the airline’s passenger traffic to AIA managed to reach almost 74 percent of 2019 levels in April 2022. 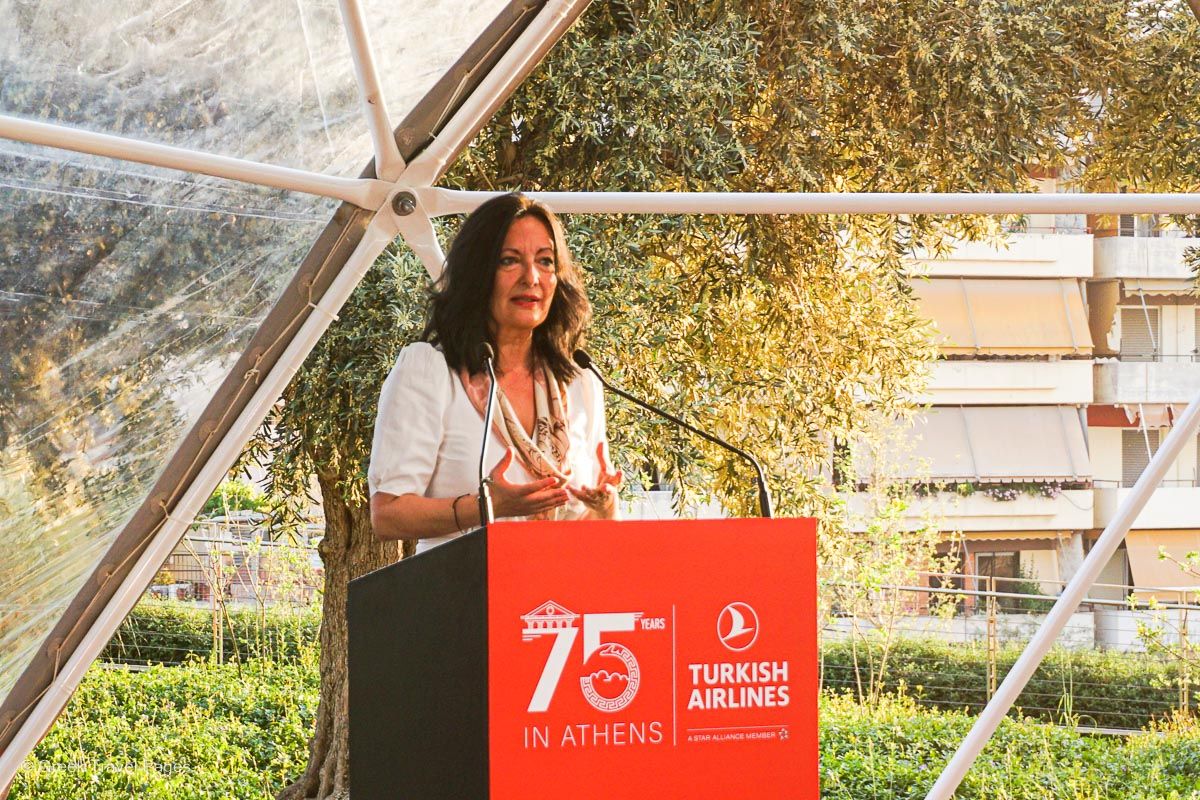 “This is a percentage that is a big achievement since the Athens-Istanbul route is not only a point to point route as it is also one with connecting traffic… So now, with many big markets in Asia still under travel restrictions, this 74 percent is really a big achievement… After two extremely difficult years for the aviation and the tourism sectors, we are very glad with the recovery prospects that are now evident,” Papadopoulou said. 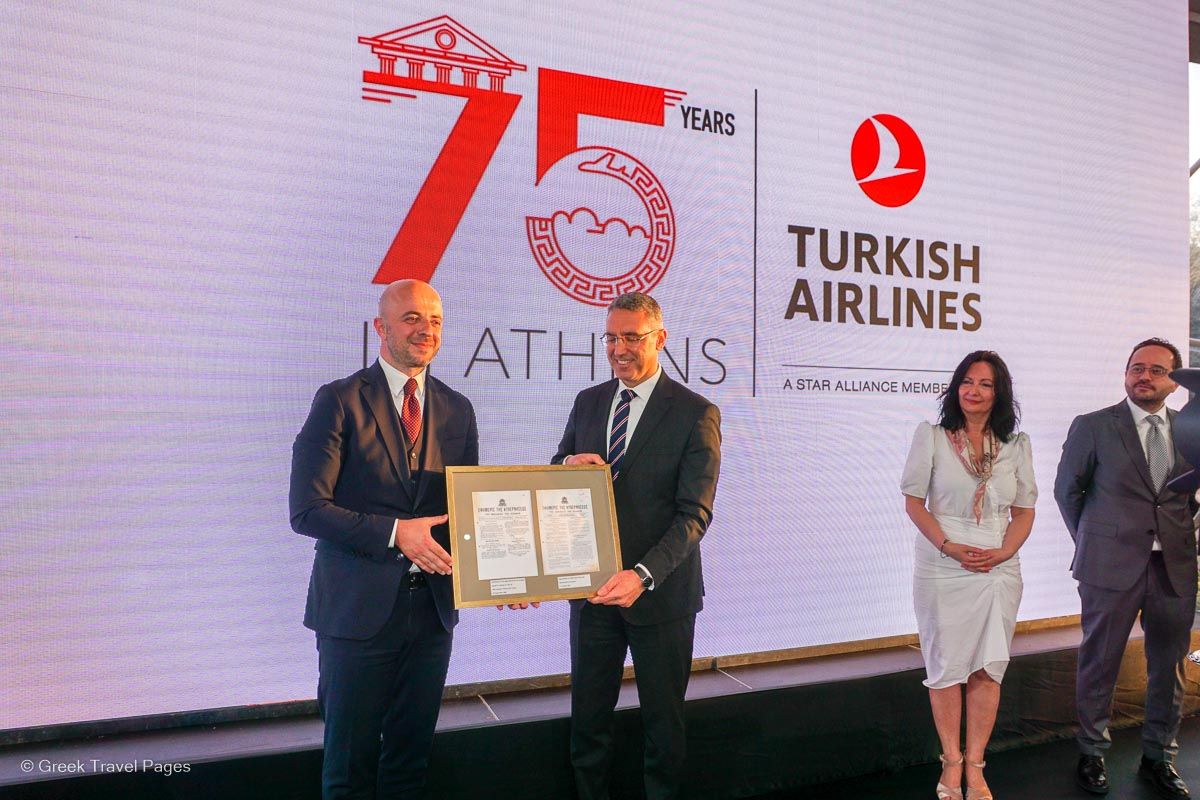 Turkish Airlines CMO Ahmet Olmuştur and Turkish Ambassador to Greece Burak Özügergin holding a frame displaying the issues of the Government Gazette with the ratification of the agreements on air transport signed in Ankara on July 22, 1947, between Greece and Turkey (29 September 1948) and the appointment of TURK HAVA YOLLARI (Turkish Airlines) representative in Greece (31 October 1967).

Turkey is considered an important market for Greek tourism. According to Bank of Greece data, incoming tourism to Greece from Turkey during 2017-2019 recorded a 12.5 percent ​​increase (from 972 thousand in 2017 to 1,093 thousand in 2019). Past data has also shown that the destinations in Greece preferred by Turkish visitors are Eastern Macedonia and Thrace, Attica and the islands in the North Aegean.