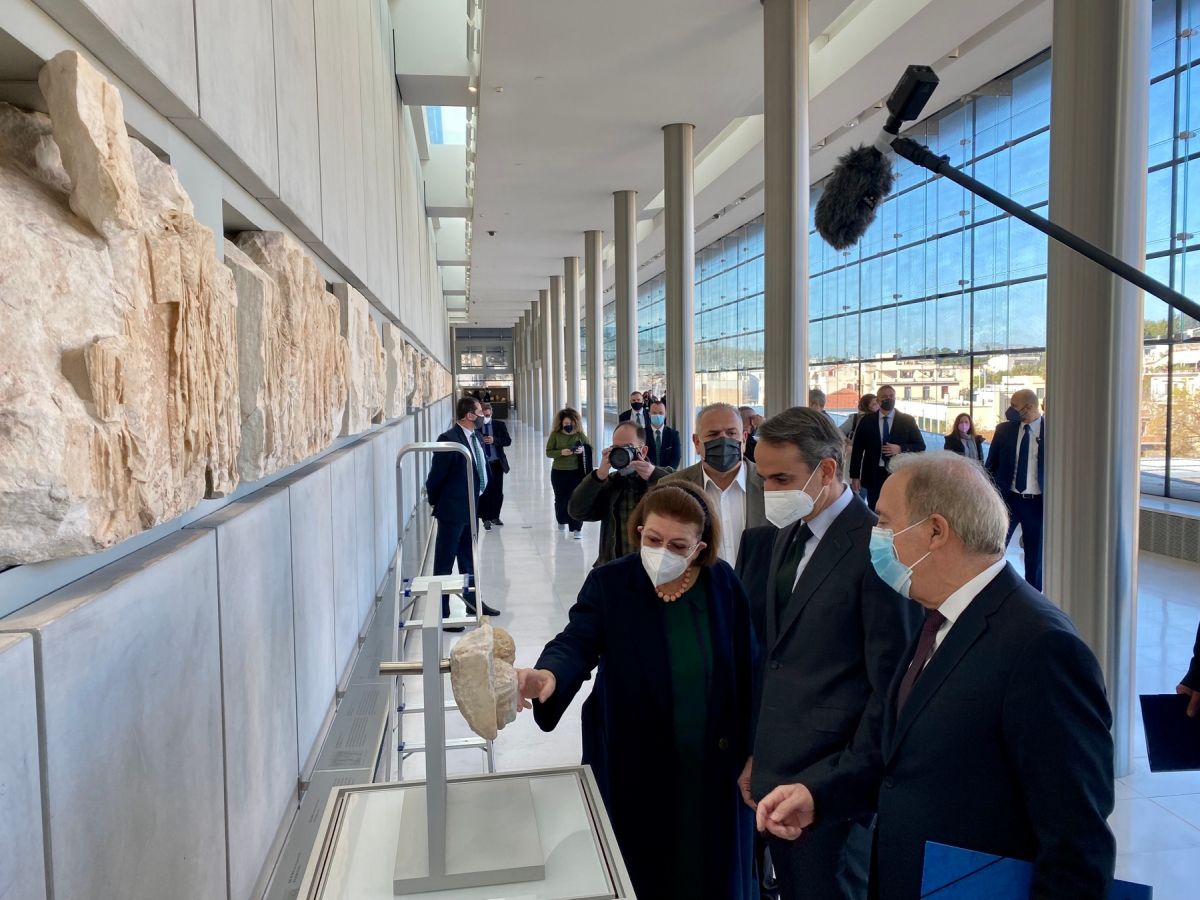 Ten fragments from the Parthenon were handed over by the National Archaeological Museum to the Acropolis Museum as a gesture of good will setting an example Greece hopes the British Museum will follow with the Parthenon Marbles.

The 32cm artifacts stored in National Archaeological Museum warehouses were welcomed by Greek Prime Minister Kyriakos Mitsotakis during a special ceremony on Monday. 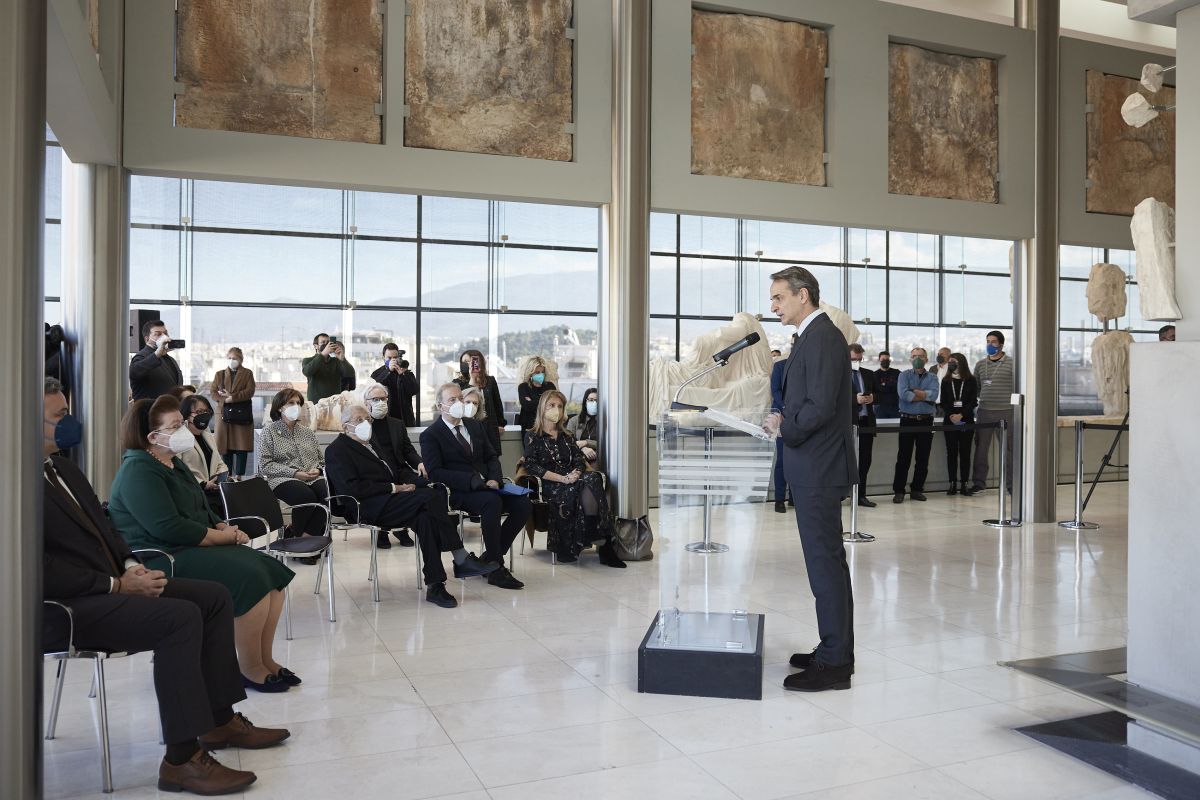 “It is a first but very important step in the effort to gather here, at the Acropolis Museum, all the smaller and larger parts of the Parthenon that are now scattered in various museums around the world,” said Mitsotakis, adding that it sends a strong message for the reunification of the Marbles.

The Greek prime minister was sending a clear message to Britain and to British Museum authorities to return the Parthenon Marbles, which were illegally removed by Lord Elgin from the UNESCO World Heritage Site in Athens in the 1800s and sold to the museum. 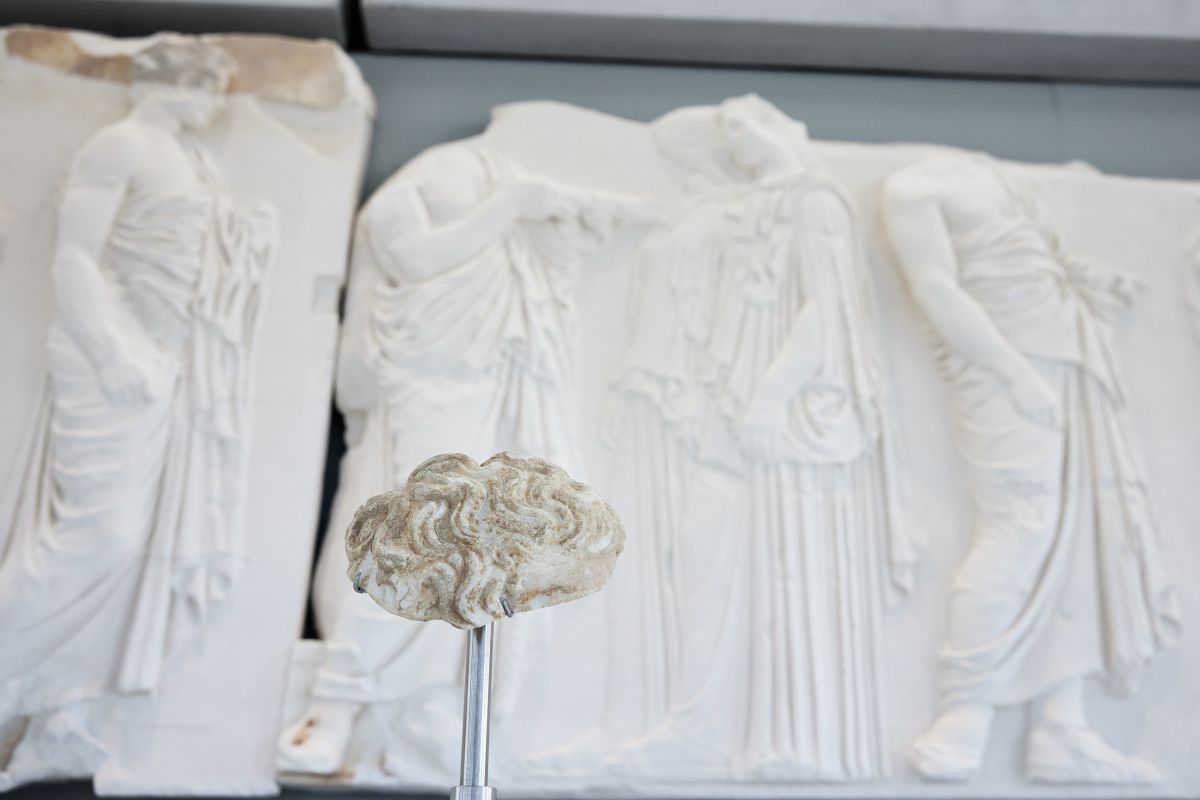 He went on to add that the National Archaeological Museum demonstrated “responsibility and scientific consistency”… “a course of action followed by the Greek state in advancing to the highest governmental level the return of the Parthenon sculptures by the British Museum”.

Mitsotakis said that Greece’s claim was also the request of UNESCO, the majority of public opinion in the UK, but also an issue “Prime Minister Boris Johnson personally understands. 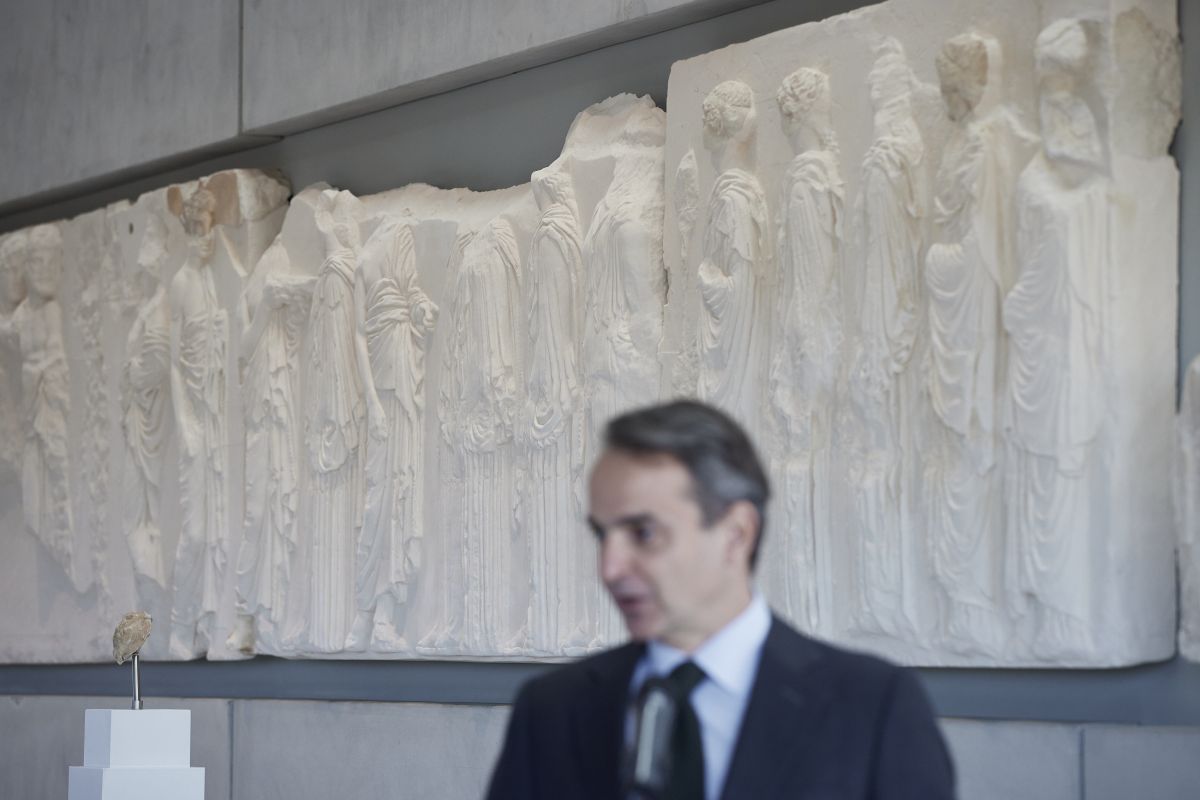 “With classical studies, an admirer of ancient Greece, I am sure that he will not block any possible future agreement, removing any possible political obstacles. If necessary, amending British law on museums in order to facilitate the reunification of the Parthenon Marbles,” Mitsotakis said.

There are no more “substantial arguments” to delay this important issue of Greek-British relations, Mitsotakis concluded. 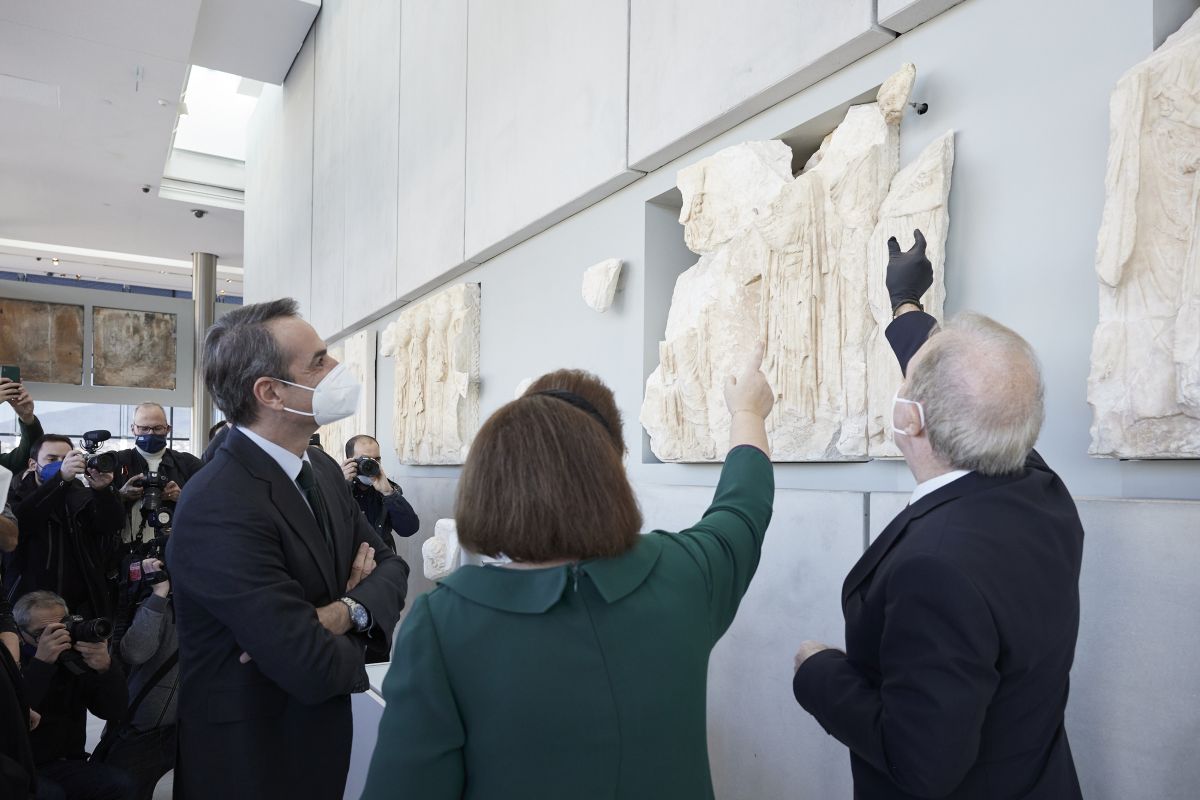 Speaking during the event, Culture Minister Lina Mendoni said the move was “not only symbolic, but absolutely essential”, noting that the Parthenon sculptures “are organic and integral parts of a complex architectural work and artistic creation as they constitute a single and indivisible physical, aesthetic and semantic entity”.

The event came to a close after conservation experts placed the returned Parthenon fragments in their spots in the museum. 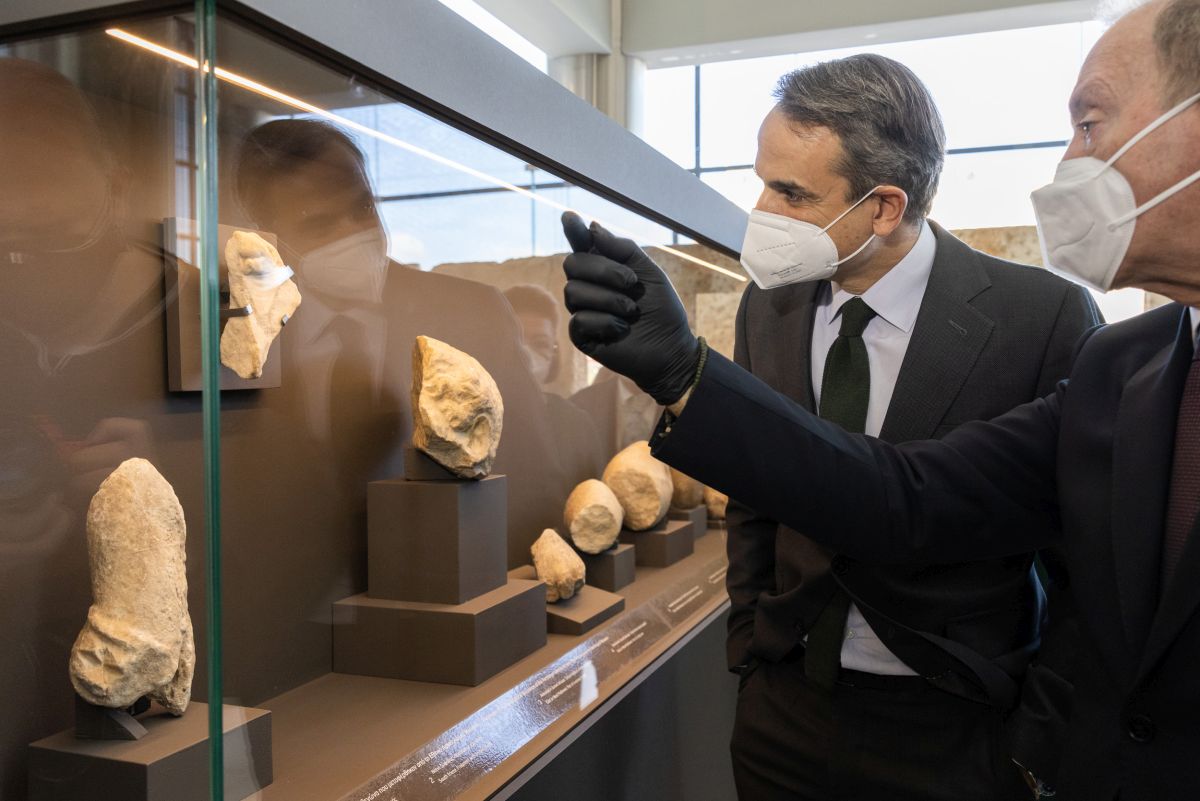 Last month, the culture ministry announced that a fragment of the Parthenon frieze on display at the Museo Archeologico Antonio Salinas in Palermo, Italy is scheduled to be returned to Greece under a long-term loan agreement.