Greece ranks 47th on a list of 132 of the world’s most innovative countries, performing “below expectations”, according to the Global Innovation Index (GII) recently published by the World Intellectual Property Organization (WIPO).

Relative to GDP, Greece’s performance is below expectations for its level of development, the GII notes.

The bubble chart below shows the relationship between income levels (GDP per capita) and innovation performance (GII score). The trend line gives an indication of the expected innovation performance according to income level. Economies appearing above the trend line are performing better than expected and those below are performing below expectations. 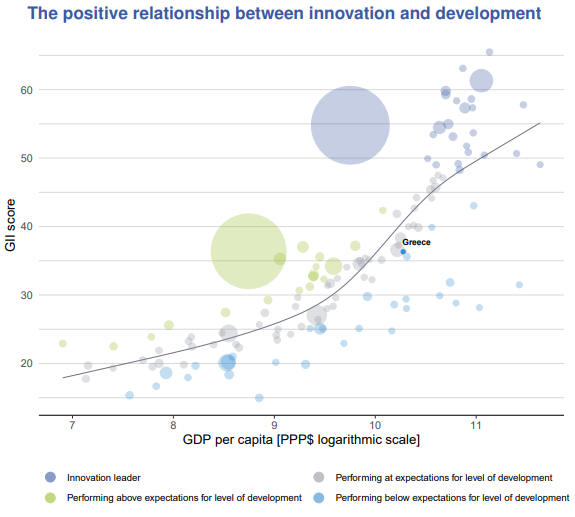 Despite its low performance, Greece has gained four positions compared to 2020 on the GII and six since 2019.

An overview of the rankings in the seven GII pillars for 2021 shows that Greece performs above the high-income group average in human capital and research.

Its weakest performance is in market sophistication. 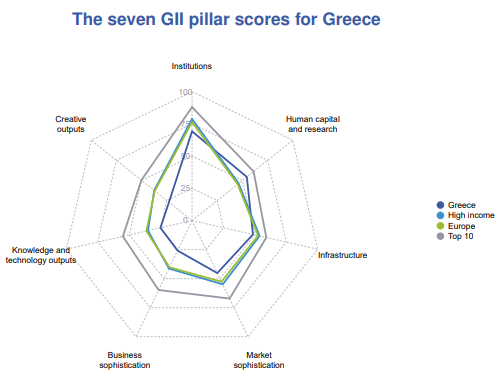 The Global Innovation Index (GII) ranks world economies according to their innovation capabilities. Consisting of roughly 80 indicators grouped into innovation inputs and outputs, the GII aims to capture the multi-dimensional facets of innovation.

Switzerland, Sweden, US, and the UK continue to lead the innovation ranking, and have all ranked in the top 5 in the past three years. 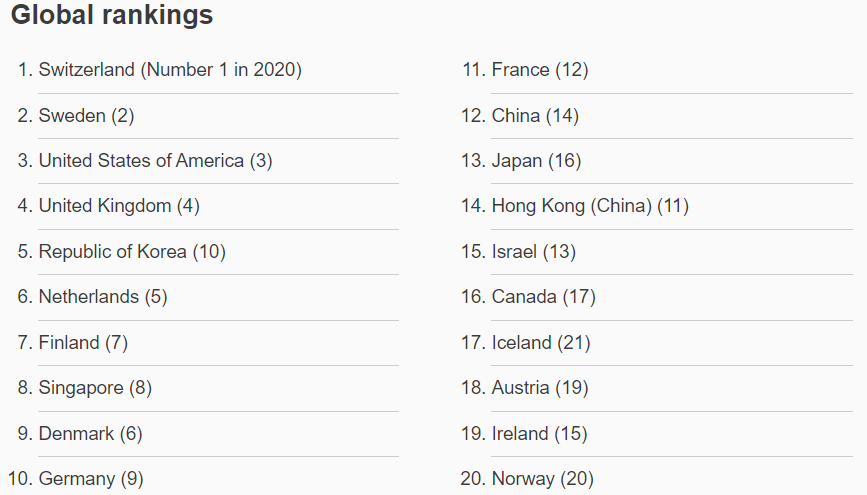 Europe is the second most innovative region in the world after the US and Canada.

According to the Index, 31 economies are performing below expectations on innovation. In the high-income group, three are European Union economies – Greece, Lithuania and Romania.

In the upper middle-income group, there are two Latin American and Caribbean economies – Argentina and the Dominican Republic.

In the lower middle-income group, 11 economies are performing below expectations for their level of development, notably five from sub-Saharan Africa – Angola, Benin, Côte d’Ivoire, Cameroon and Nigeria.