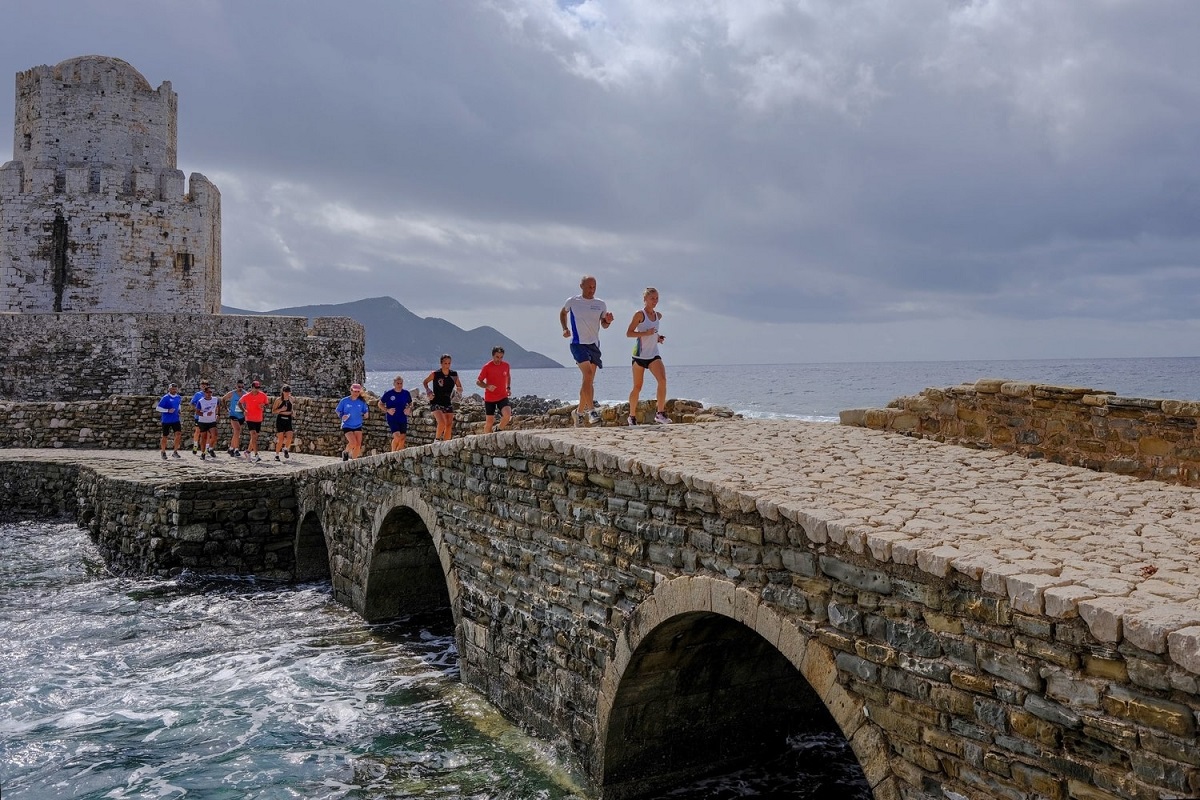 Runners of Run Messinia at the impressive and imposing Castle of Methoni.

Two hundred years after the start of the Greek revolution, a handful of ultramarathon runners, a small group of people, ran and followed the paths of great Greek heroes like Kolokotronis, Nikitaras, Papaflessas, Mavromichalis, Ypsilantis, Papatsonis, and Mitropetrovas.

Run Messinia was an event that received a lot of love from the people of Messinia, Laconia and Arcadia, the help needed from those who believed in this vision from the local government and the support from sponsors to be able to be implemented in this significant year for the Greek nation. 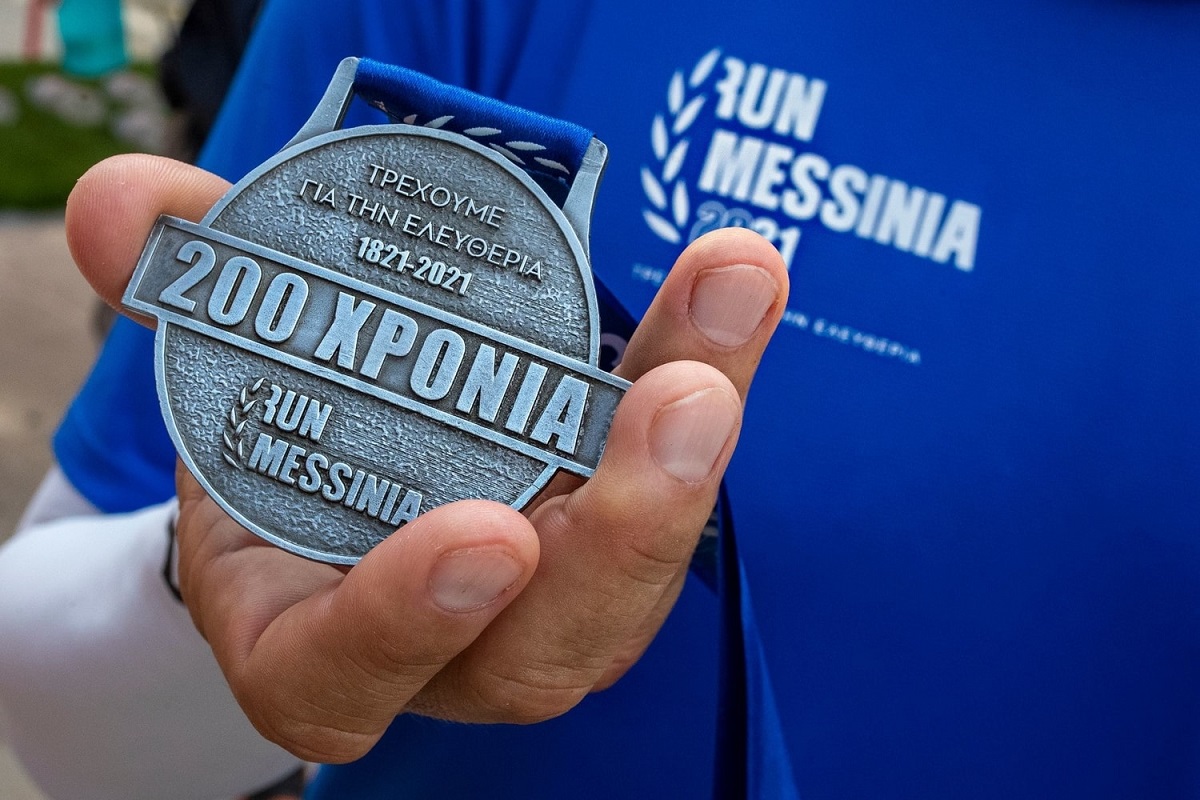 For the first time after many years, the historical monuments of the 1821 Greek revolution, in Messinia, came to life all together and became the starting and end points in some of the routes of Run For Freedom.

Runners probably experienced the conditions that our Greek ancestors experienced many years ago. Sun, heat, rain, cold, wind, frost were just some of the “insignificant” things our team encountered. The important ones are the monuments that saw the light of day and the union of all of them in a unique event that combined sports, tourism and culture with the Greek History.

Yes, they walked, ran, sweated, got cold, had a hard time, faced many challenges and discovered new aspects of themselves.

The question is, weren’t all these heroes of 1821, ordinary soldiers, peasants or generals, ultramarathon runners? Didn’t they cross long distances to go from Areopoli to Maniaki or Kremmidia or Pylos? 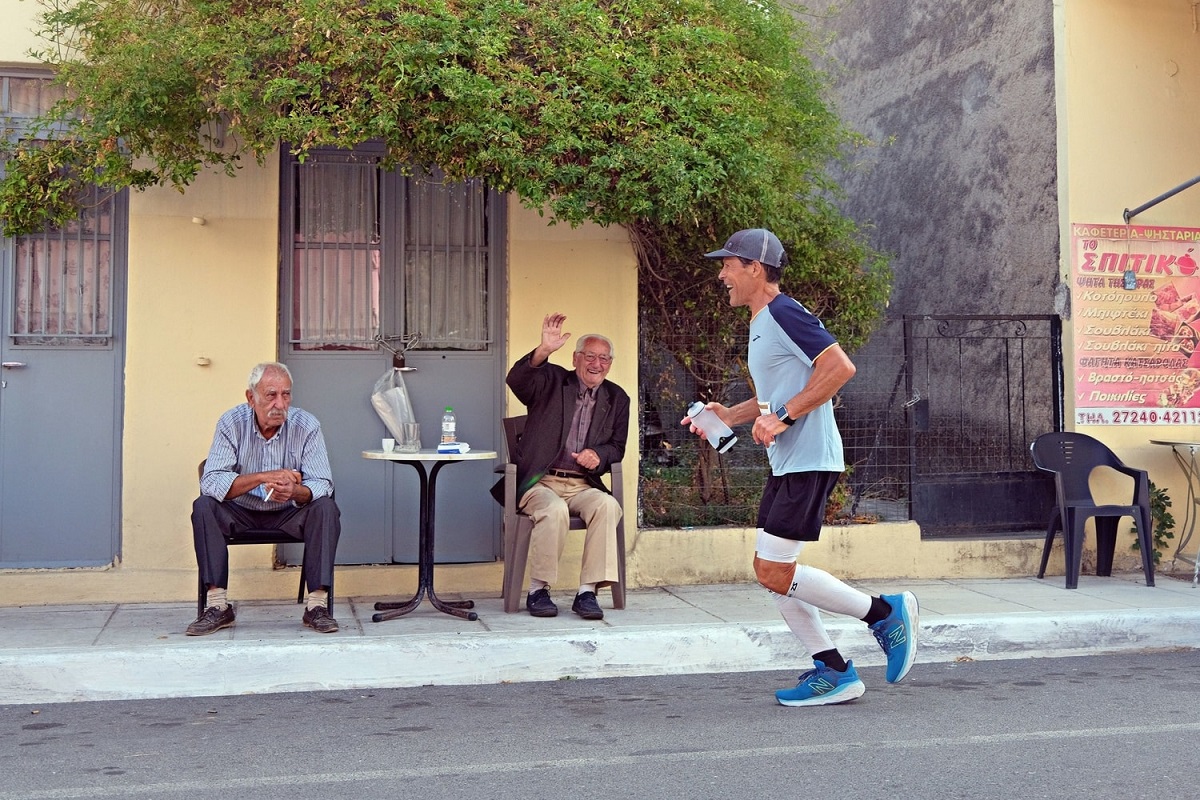 Warm welcome of the Run Messinia runners by the regions’ residents.

The ultramarathon runners Konstantinos Dean Karnazes and Vasilis Koumanakos were the athletes who completed all 10 runs in 10 consecutive days.

In the context of his participation, the Greek-American ultramarathon runner Konstantinos Dean Karnazes, stated: “Run Messinia was a difficult and arduous challenge for all involved. But we joined together, as our forefathers did, and emerged victorious. I will never forget the experience and the significance of our achievement”. 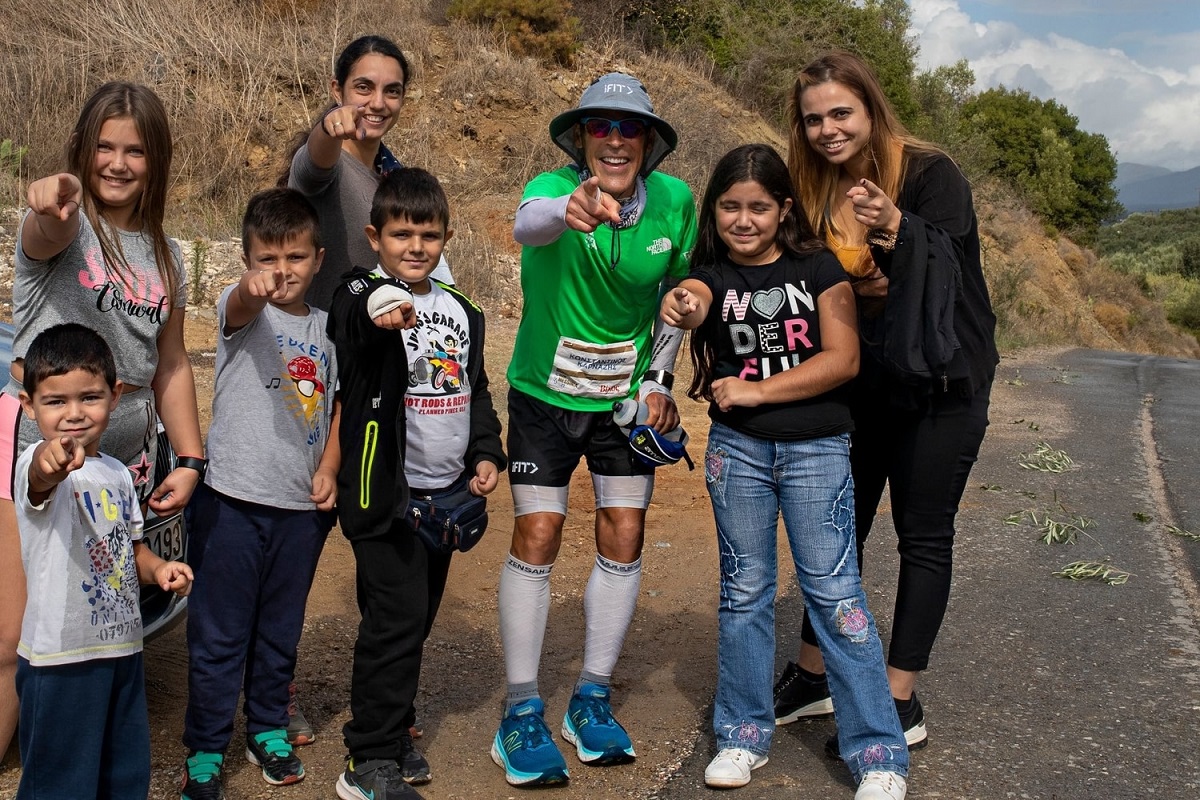 Warm welcome of the Run Messinia runners by the regions’ residents.

Respectively, the Marathon des Sables Finisher (Sahara 250km) and athlete of the Health Runners Club of Messinia (SDYM) Vasilis Koumanakos, stated among other things: “Ten days on the road. At the moment I cannot process the torrent of images and emotions that were ‘recorded’ in my mind. Completing 418km, 3km before the last finish, I didn’t know if I want all this to end”. 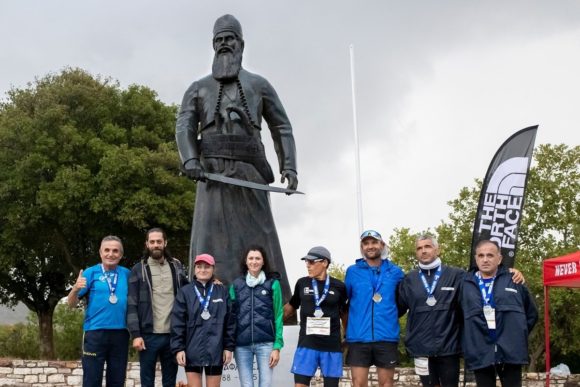 The athletes of Run Messinia at the Papaflessas statue in Maniaki. 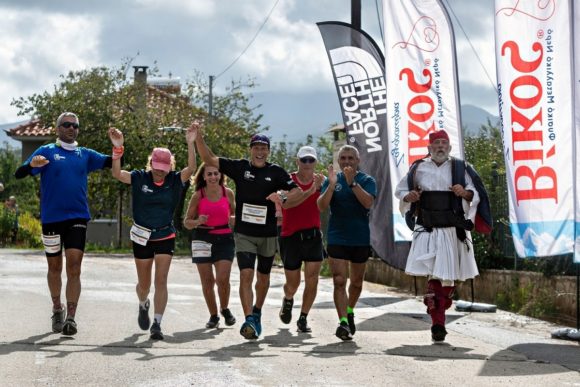 Runners of Run Messinia all together at the finish line.

The additional runners who participated in some of the routes of the Run For Freedom were in alphabetical order: Stavroula Baka, Ioannis Dimopoulos, Noora Honkala, Vasiliki Karpouza, George Lazaridis (with his escort Dionysis Malamas), Christos Mavrikios, Georgia Mitsiou, Christos Roubos, Angela Terzi, Apostolos Tzoumakas, Dimitris Troupis, as well as runners of the Health Runners Club of Messinia (SDYM) and the Spartan Runners Club. 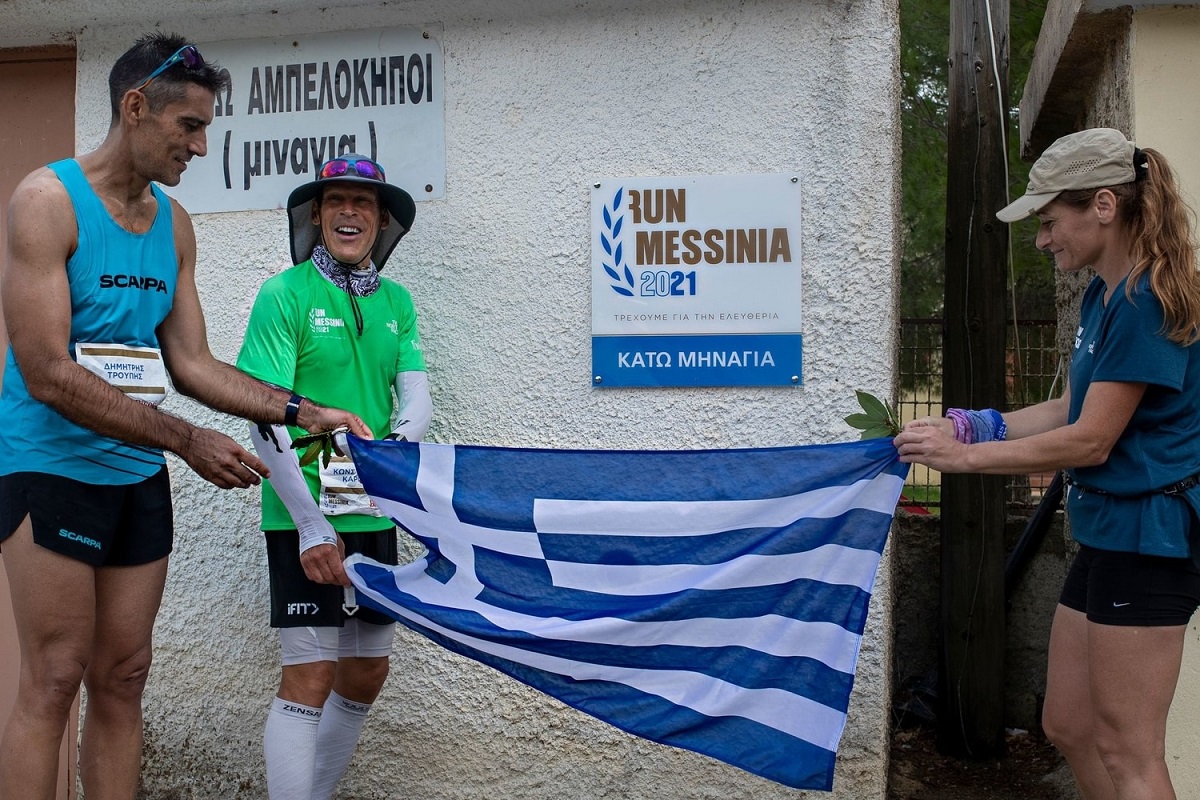 Warm welcome of the Run Messinia runners at Kato Minagia and unveiling of an honorary column at the entrance of the settlement. Symbolic ceremony from the Cultural Institute of Messinia.

The Chief Executive Officer of ActiveMedia Group, Mr. Akis Tsolis stated in this regard: “From the very first moment when we thought of the idea of ​​highlighting the historical sites, monuments and fighters of the Greek Revolution in the Messinian land through running, we found support in the common people. We found support from Greek companies like VIKOS, from our fellow travelers Avance and Target Security as well as from the top outdoor equipment company, The North Face. The companies of Messinia also supported our initiative. The Poseidonia restaurant, the Karalis City, Karalis Beach and Galaxy hotels in Pylos, the Elite City Resort in Kalamata, the Mesogeios Dialysis Centers Group, but also the Laconia Juices that helped so much in empowering our athletes.

None of these would have happened without the support of the small, in population, municipalities of Messinia, Laconia and Arcadia but with magnificent greatness of heart, their residents, their volunteers, the church of course and the ordinary people who taught everyone what does a GREEK mean.

I wish to thank also our production team who worked daily with passion and self-denial so that we can give and offer to our future generations the historical elements and the beautiful images from this Run For Freedom, 200 years after the Greek Revolution. Our company is in the market to innovate, to create content in Greek Sports Tourism and to emphasize the values ​​of sports through the aspect of tourism and culture”. 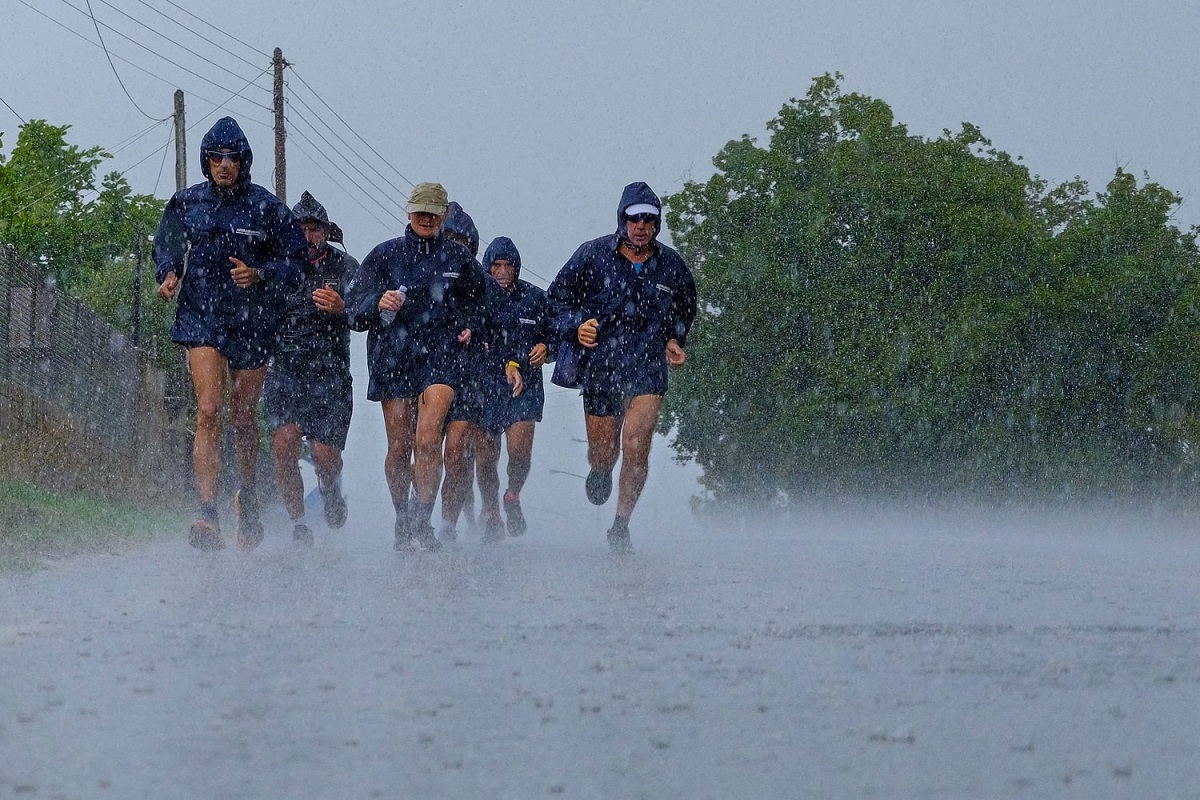 Impressive photo of the Run Messinia athletes who run under extreme weather conditions.

The valuable support of the municipalities to Greek history 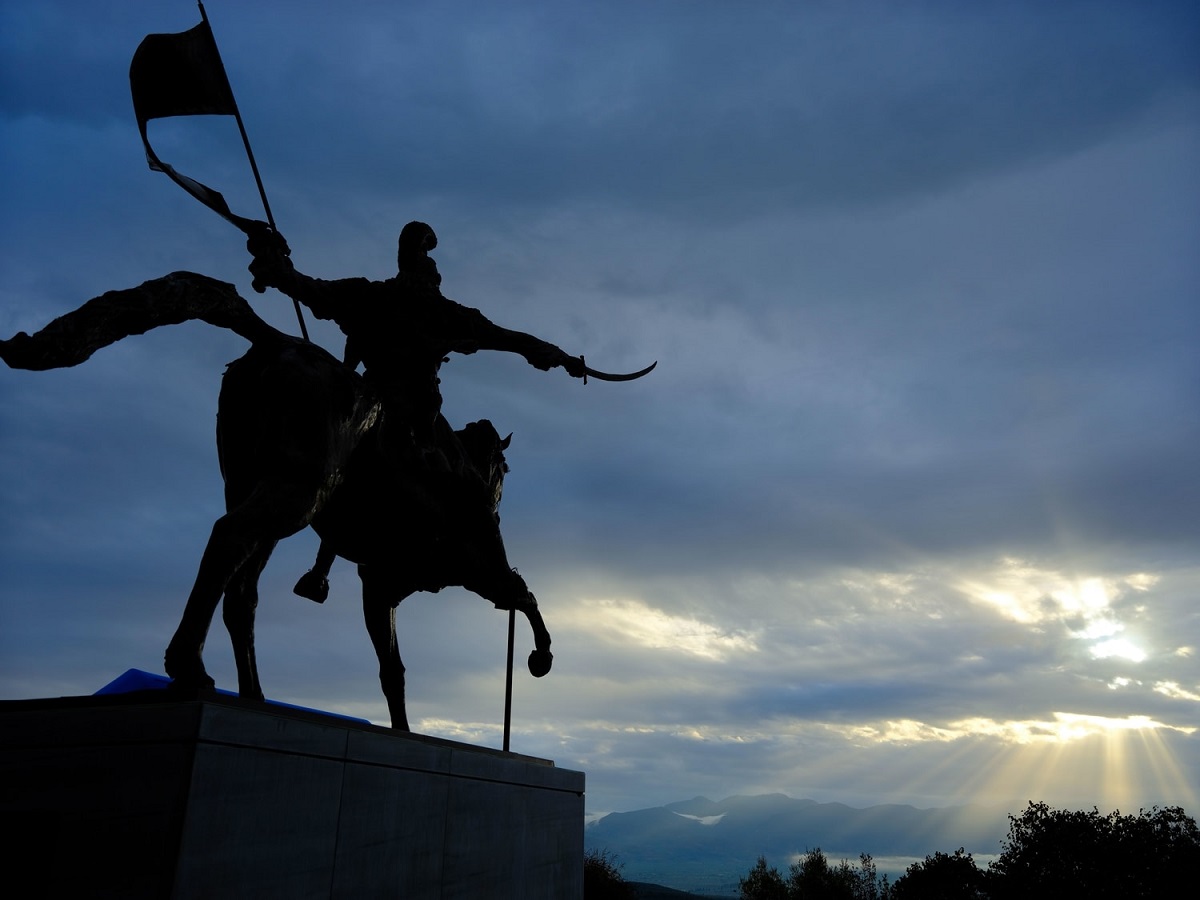 The statue of Theodoros Kolokotronis in Ramovouni (A route’s start and finish point of Run Messinia).

Run Messinia was held with the support of the Peloponnese Region.

The event was held under the auspices of the Greek National Tourism Organization, while the award-winning Angelos Zymaras was the event’s official photographer.

GTP Headlines was a communication sponsor of the Run Messinia event.