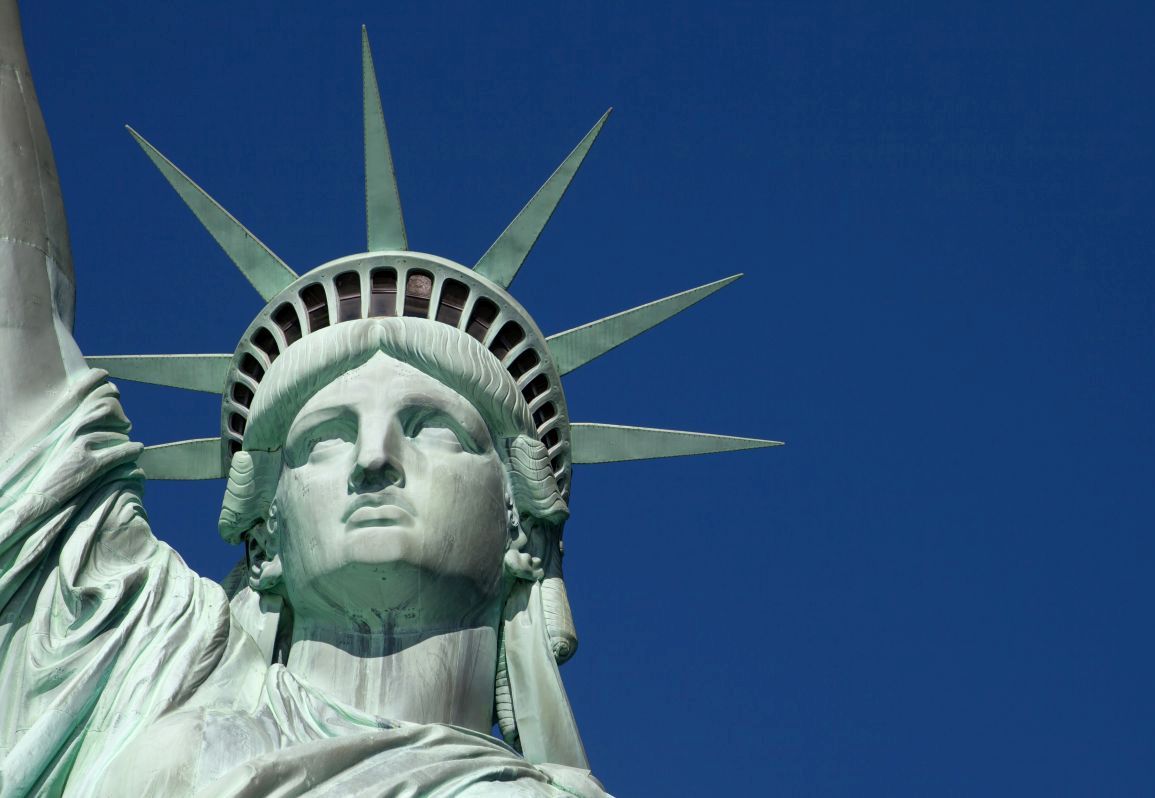 The news that most vaccinated European travellers will be able to fly to the US again from November brought a strong surge in ticket sales, according to recent data.

More specifically, the International Air Transport Association (IATA) said the announcement brought the rate of change versus 2019 in line with that of US-based consumers and highlighting once again strong pent-up demand for flying.

“Travellers from Europe accounted for roughly 43 percent of the total traffic in the North Atlantic market in 2019, and 40 percent of passenger revenues,” IATA said.

Although the upcoming Q4 quarter is a seasonal low for air travel demand, airlines are expected to increase their capacity on this route. 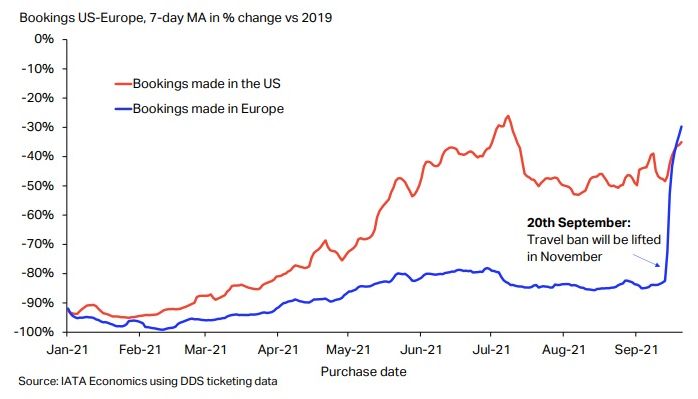 IATA economics’ chart (dated October 1) shows bookings made daily by travellers based in the US and in Europe, for all travel dates. For US individuals, the news did not have a significant impact, as Europe was already partly open to them. On the other hand, for European travellers, the announcement brought a strong surge in ticket sales.

Following the announcement, airlines’ scheduled capacity is planned to reach some 65 percent of 2019 levels in November and around 75 percent in December, up from roughly 45 percent in September (OAG data).

“This is a significant step toward normalization. However, the recovery to pre-pandemic levels in global international air travel is still a long way off,” the association added.

Flights to the US are booming, says Lufthansa 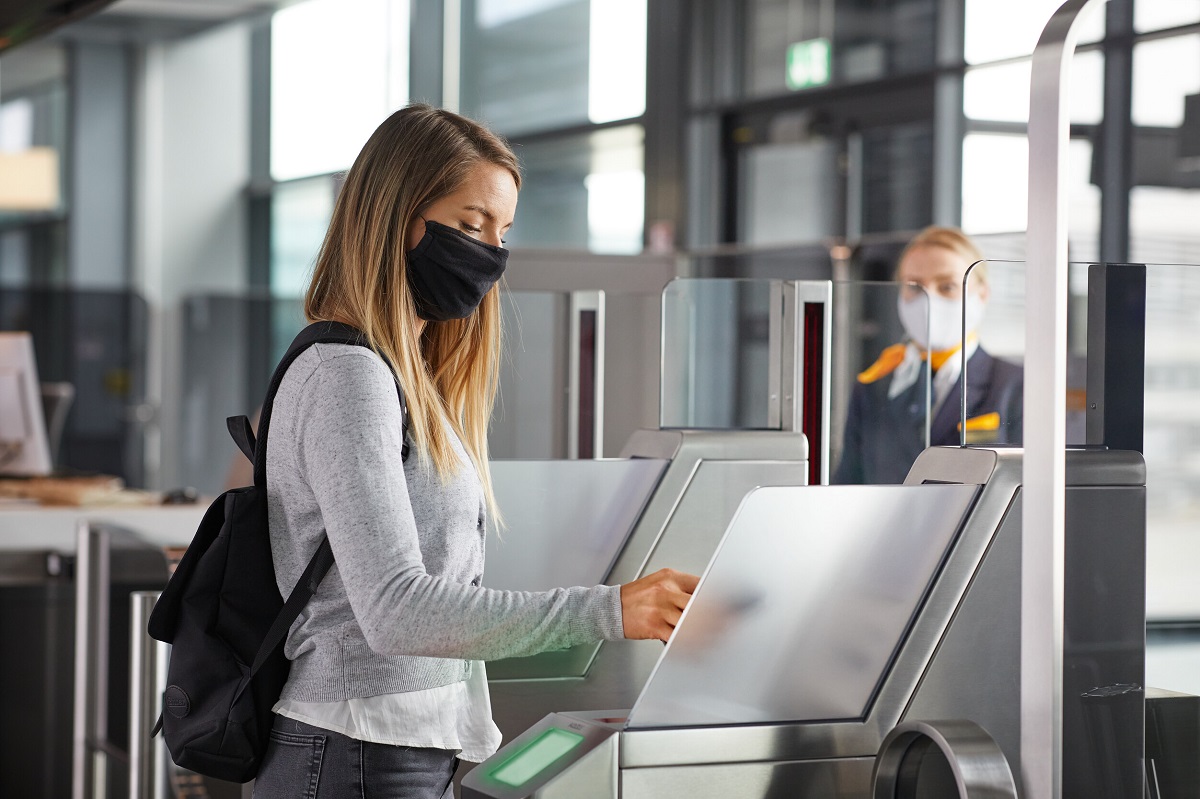 One example of a surge in bookings to the US is data provided recently by Lufthansa Group airlines.

According to the Group, about a week after the planned end of U.S. travel restrictions, its airlines began experiencing a further boom for flights to America, with demand on certain routes almost reaching pre-crisis levels. Flights with SWISS from Zurich and Lufthansa from Frankfurt to New York and from Frankfurt and Zurich to Miami had the highest bookings from both leisure and business travellers.

Moreover, the Group said that there is very strong demand for flights to the US for the coming December as bookings in late September were as high as they were for 2019 for the same time period.

“Flights to New York – traditionally in high demand during the Christmas season – have already been bolstered with additional connections,” Lufthansa Group said in an announcement.

US tourism to benefit from influx of UK tourists 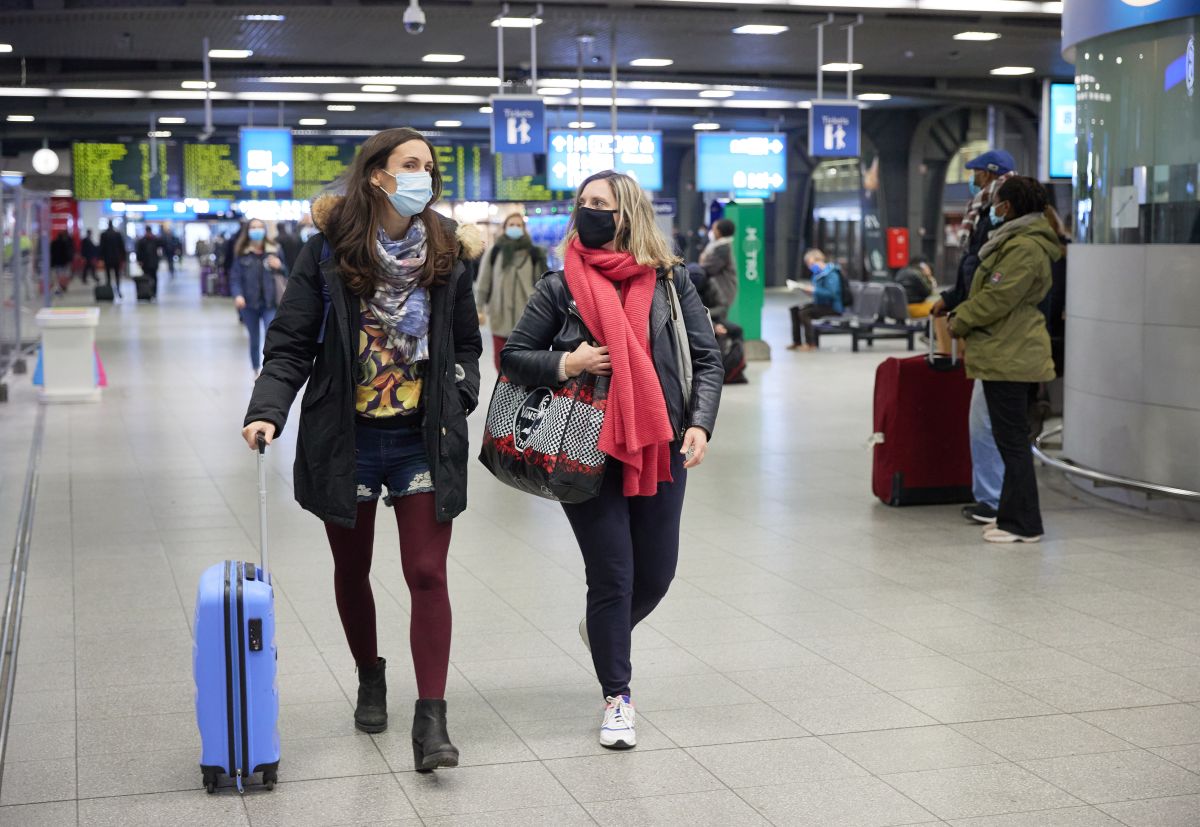 On the same subject, data and analytics company GlobalData notes that as travel restrictions begin to ease and pent-up demand is unlocked the number of people travelling out of the UK to visit friends and relatives (VFR) in the US is set to rise from 10.6 million in 2021 to 20.5 million by 2024.

According to GlobalData, VFR travel is set to increase at a compound annual growth rate (CAGR) of 24.8 percent between 2021 and 2024.

Jia Haider, Associate Travel and Tourism Analyst at GlobalData, says that VFR is expected to increase at a greater pace than leisure, which is unusual as pre-covid leisure was significantly higher in demand than VFR.

“Focusing on VFR travel demand would be a smart move for both UK and US airlines, as UK travellers look to reconnect with their loved ones after months of separation,” Haider said. 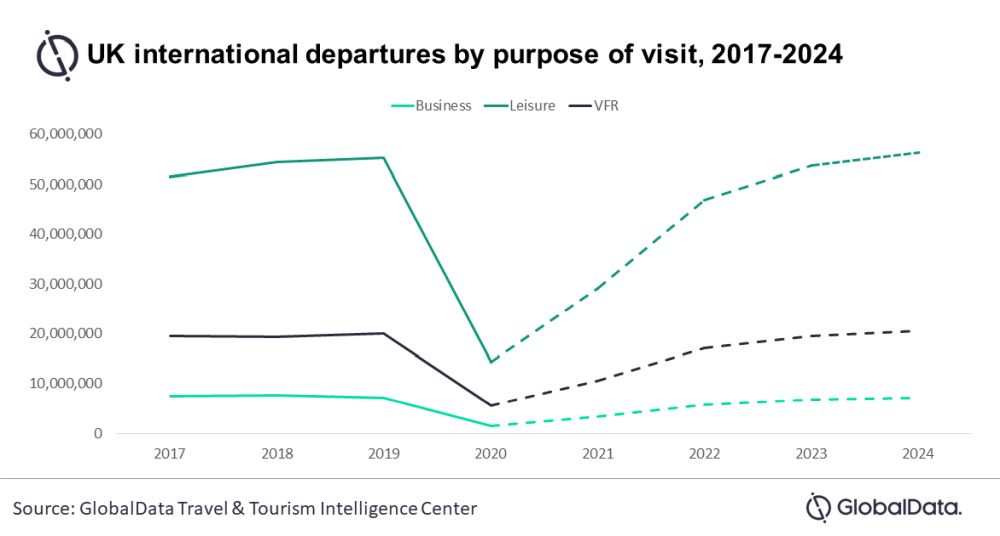 In a poll by GlobalData to 1,361 respondents, 58 percent revealed that quarantine requirements were the largest deterrent for international travel, with a further 55 percent saying they would be deterred by travel restrictions.

However, as Haider points out, hesitance towards travelling is likely to change from early November, when fully vaccinated UK travellers will be able to bypass quarantine requirements and face fewer travel restrictions when entering the US.

UK travellers will, however, still need to provide proof of a negative test result no more than three days prior to travel or evidence of recovery from COVID-19 in the past three months.

Haider added that direct flights could play a role in generating much-needed revenue and an increase in flight frequency.

“UK-based airlines with strong US flight schedules, including British Airways and Virgin Atlantic, have reported surges in demand for flights to the US. Direct flights will likely be favoured by travellers as they allow for a perceivably safer experience than connecting via a hub.”

According to GlobalData, the US was the fifth most popular international destination for UK travellers in 2019.