The Culture Ministry is carrying out a major restoration project at the archaeological site of Delos with the aim to preserve its monuments and upgrade the island’s tourism infrastructure.

Dubbed “Delos: Open Museum”, the project has secured funds reaching 4.5 million euros from the National Strategic Reference Framework program (referred to in Greece as ESPA funds). It includes the first phase of restoration works at Apollo’s temple, the configuration of the ancient temenos, the restoration of the Granite Palaestra, the maintenance of the House of the Diadoumenos and the Lake House, the creation of new routes and the maintenance of staff facilities.

According to Culture Minister Lina Mendoni, the ministry’s comprehensive plan aims to restore, promote and manage the entire archaeological complex of Delos, as well as create additional museum facilities such as exhibition spaces, maintenance workshops, storage areas and visitor reception areas among others.

“Delos is one of Greece’s most emblematic archaeological sites, which gathers the interest of the international archaeological community and thousands of tourists every year… We are proceeding with the restoration and promotion of the site through a holistic approach, as these ancient ruins are an integral part of the island’s natural environment,” she said during a recent inspection visit to the island. 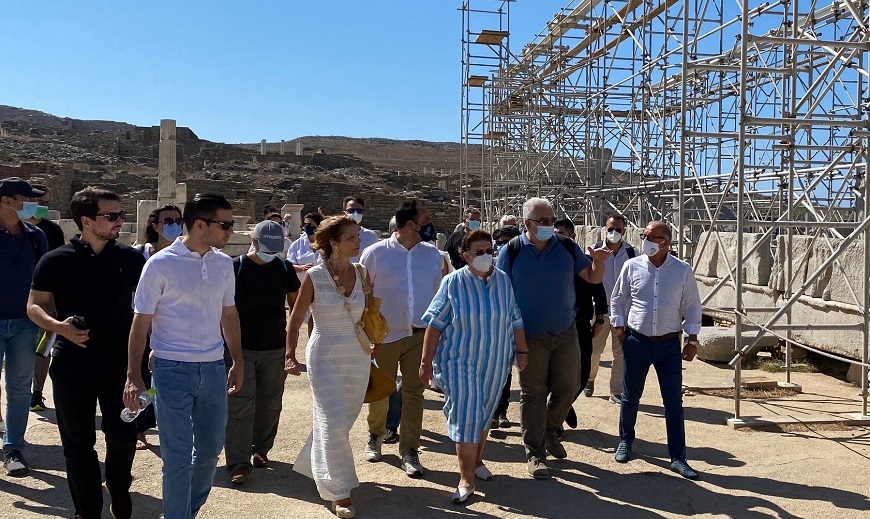 The “Delos: Open Museum” project has been designed by the Culture Ministry and the Cyclades Ephorate of Antiquities with the support of the International Foundation for Greece (IFG).

Accompanying Mendoni on Delos, IFG President Aspasia Leventi also announced the development of a new archaeological museum on the island.

“A major cultural vision of IFG, the construction of Delos’ new archaeological museum, will be carried out after years of efforts… The new Delos Museum will be modern, bioclimatic, integrated into the environment, worthy of the history and glory of this sacred island,” she said.