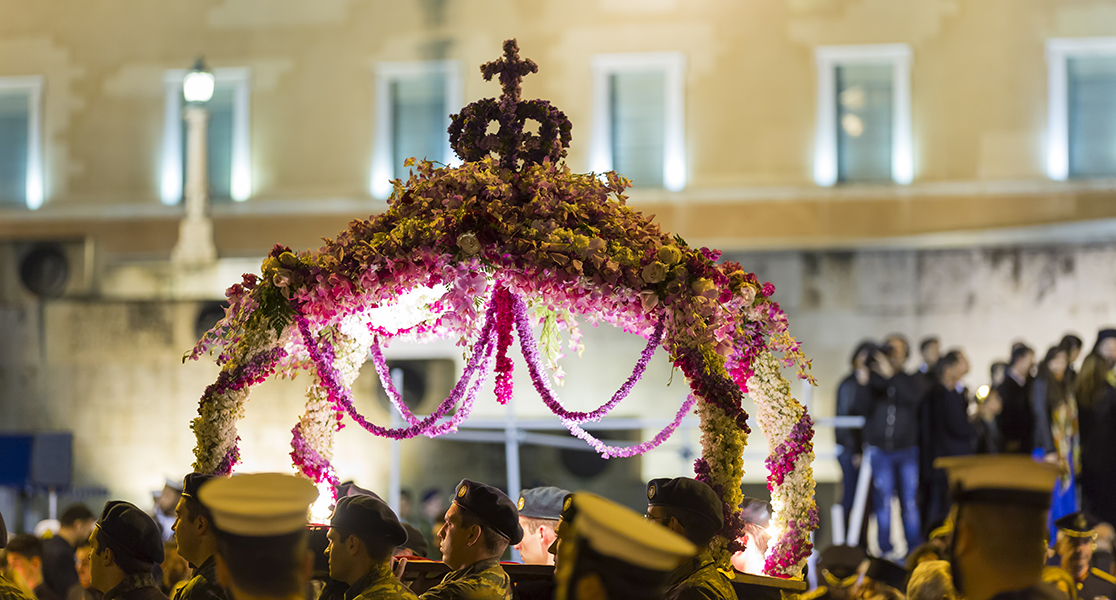 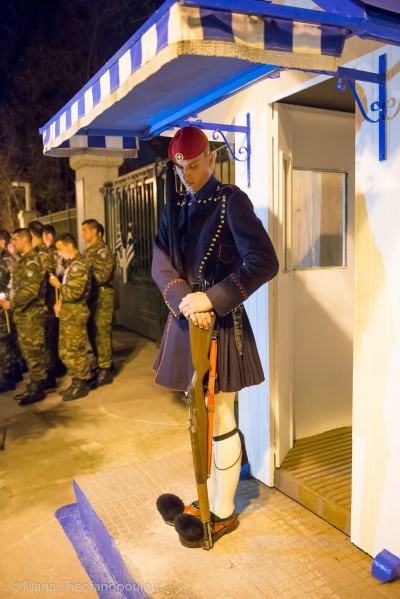 Unique posture of the presidential guard Evzone during an epitaphios procession on Holy Friday in Athens. Photo © Maria Theofanopoulou

Tolling bells echo in the background as Greeks hustle and bustle to get everything done before Holy Friday. This is the darkest day of the year for the Orthodox faithful as they mourn Christ’s passing. No activities are allowed on this day.

The Body of Christ is removed from the cross, wrapped in a white cloth and placed on the “epitaphios”, which has been adorned with flowers. At sunset, it is carried through the town or village followed by the congregation holding dark brown candles in an enactment of a funeral procession while solemn chanting or mournful music is heard in the background.

Holy Week or “Megali Vdomada”, which starts with the mass on Palm Sunday, commemorating Christ’s coming to Jerusalem after his miracle of raising Lazarus from the dead, is a time of spirituality.

Churches and chapels countrywide play a key role in creating the pious atmosphere, especially at midnight on Holy Saturday, when the Holy Light arrives and everyone, candles in hand, chants “Christos Anesti” (Christ Has Risen).

Each day of Holy Week marks a day in the Passions of Christ which culminate with His Crucifixion, burial, Vigil and Resurrection. But although Orthodox Easter is the most important religious holiday for the Greek people, it also carries a profound wisdom of rebirth, serving as a celebration of life marked by the coming of spring.

Easter (Pascha in Greek) is a unique experience that travelers to the country should not miss. Young and old still observe the centuries-old traditions and rituals that lead up to Easter Sunday, the day of love. At noon the faithful go to church to hear the Gospel of Love (translated into several languages announcing to the world that Christ Has Risen) as bells toll joyously. In the meantime, preparations for the feast traditionally begin at daybreak with the heads of the family preparing the coals to roast the lamb. Later in the day, family and friends unite around the table to indulge in roast lamb, homemade bread, fresh salad and fine wine. The festive occasion celebrating the Resurrection of Christ begins with the customary red egg bouts. Everyone partakes in egg breaking – the winner being the one whose egg remains in tact.

All these traditions will this year, be limited if not cancelled due to Covid-19 restrictions in place to curb the spread of the virus. This year, Greek Easter will be carried out with special rules.

Though Greece may be an ideal getaway for summer, visiting Greece during Orthodox Easter in the beginning of spring promises to be a mystical experience. The underlying feeling of loss during Holy Week paves the way for hope and rebirth, refocusing our attention once again on the ultimate meaning of life.

Love is in the Air… at Leonidion 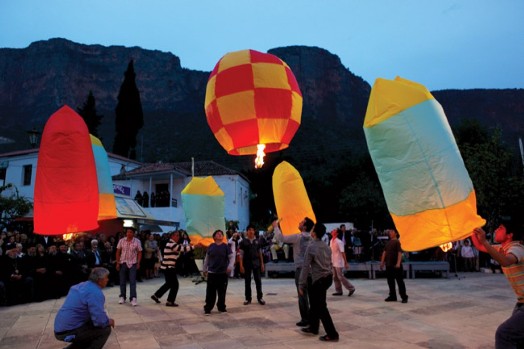 Some 215km from Athens, nestled in the warm embrace of the captivating Parnonas mountain range and the deep blue Myrtoan Sea, is Leonidion. This busy little town in the eastern Peloponnese is home to some 7,000 permanent residents. All year round, they work on hundreds of colorful air balloons that traditionally represent their parish on Holy Saturday. When the church bells joyously mark Christ’s Resurrection, the night sky fills with these beautifully handcrafted balloons in an enthralling celebration of light.

It is said that the custom first emerged in the early 1900s by a local priest while others claim it was brought to the village by traveling sailors. Every parish prepares its own balloons made of rods, colorful paper and wire and at midnight the competition begins.

Before the Covid-19 restrictions and when the pandemic subsides, the municipality treats locals and visitors to food and wine in the City Hall gardens on Easter Sunday, as local musicians perform traditional songs of the region. At noon, the Gospel of Love is read in the Tsakonian or Tsakonic Language, a derivative of the ancient Doric Greek and now almost extinct.

War of the Worlds on Chios 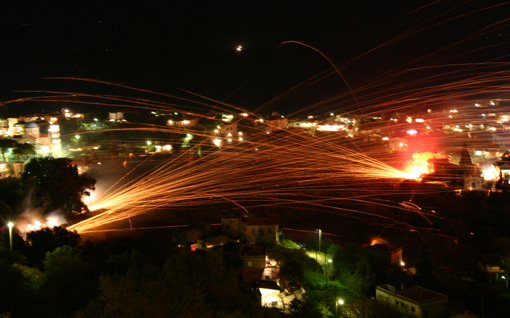 It’s all in the name: the coastal town of Vrontados (which means rumbling thunder) on the island of Chios is home to some 4,500 restless souls who make plans every year to outdo each other during the popular “rouketopolemos” (rocket war) that traditionally takes place at midnight on Holy Saturday between the churches of Agios Markos and Panagia Erythiani built atop opposing hills. This year many of the rituals have been cancelled due to Covid-19.

The Orthodox rivals fire hundreds of makeshift, gun-powder-fuelled rockets at each other aiming to strike the bell tower. The team that hits the spot, wins the battle, which is said to date back to the times of Ottoman rule, when cannons were used instead. The war continues the following year as both sides refuse to admit defeat.

Dotted with medieval villages and boasting a centuries-old merchant seafaring tradition, Chios is the fifth largest of the Greek islands and said to have once been Homer’s home. There is even a natural seat called “Homer’s stone”, from where legend has it the poet taught. It is said, that before discovering America, Columbus turned to the seasoned seamen of Vrontados to gain insight of nautical charts and maps. 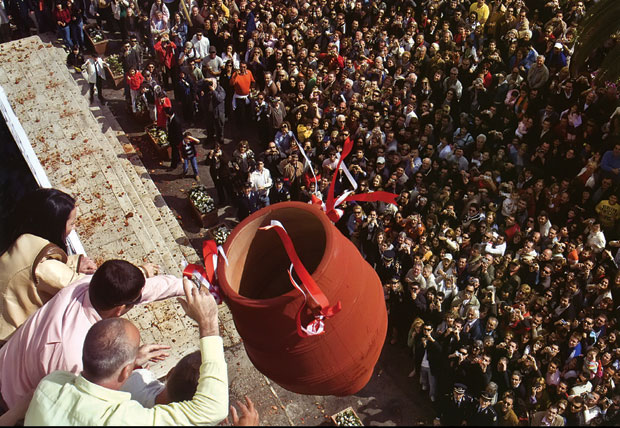 Located in the Ionian Sea, Corfu is the second largest of the Ionian isles boasting a long-standing music tradition and home to many of Greece’s famed poets, master musicians and statesmen. British travel writer Lawrence Durrell called it a “brilliant little speck of an island in the Ionian… with waters “like the heartbeat of the world itself”.

Noble best describes the Easter celebrations on Corfu (Kerkyra in Greek), where, on Holy Friday, the island’s choirs and three leading marching bands – the Palaia (Old) performing Albinioni’s “Adagio”, the Mantzaros performing Verdi’s “Marcia Funebre” and the Capodistria performing the “Elegia Funebre”, Mariani’s “Sventura” and Chopin’s “Funeral March”, each accompany its own parish during the epitaphios procession through town. This year, due to Covid-19 measures, the epitaphios procession has been cancelled and a service will only be held at church. 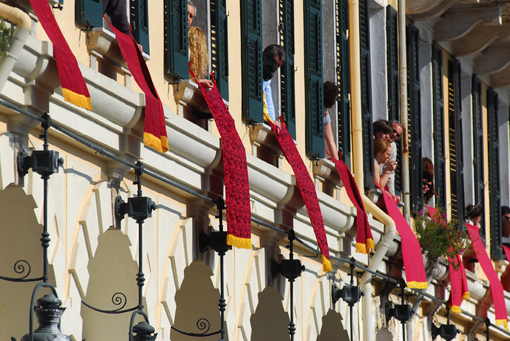 The mournful atmosphere of Holy Friday takes a tumultuous turn on Holy Saturday at noon on Spianada Square, where Corfiots traditionally drop water-filled clay pots known as “botides” from their windows, which have been dressed in velvet red cloths celebrating Christ’s First or Early Resurrection. Blasting fireworks, chiming bells and breaking pots make up the aural canvas as bystanders and devout chant “Christos Anesti” (Christ Has Risen) and embrace each other as the bands now unite to perform the once-banned festive “Graikoi” march.

When you have the chance, don’t forget to take a piece of broken pottery with you for good luck. In the meantime, Easter festivities continue into Sunday with local delicacies such as sweet bread “fogatsa”, egg-lemon soup with beef or lamb and “tsilihourda”, a meat-based soup to sooth the stomach after lent.

A Symphony of Spring… Monemvasia

I close my eyelids, to the calm of the night
and listen to the chirping of the myriads of stars
there, where your fingers stroked my flesh…

Monemvasia-born poet Yannis Ritsos wrote in 1938, perhaps remembering the starry sky of the fortress town atop a tiny island off the east coast of the Peloponnese. Ritsos, twice nominated for the Nobel Prize and winner of the Lenin Peace Prize, best describes what the traveler will experience during a stay at his beloved Monemvasia.

Also known as the “Gibraltar of the East”, Monemvasia is a preserved Medieval town on top of an islet that broke off the mainland in an AD375 earthquake. Founded by the Byzantines in the 6th century, the Kastro – as it is also known – is divided into the upper and lower town. Today, of the 40 churches once standing only a handful remain open: the Church of Elkomenos Christos, the oldest, Agios Pavlos dating back to 956, today a museum, the 16th-century Panagia Chrysafitissa, and the Agia Sophia, from where you can on a clear day see the mountains of Crete.

It is perhaps here, in Monemvasia, that the traveler will experience the ultimate spiritual Orthodox Easter experience. The silence, the aura of yesteryear along the narrow pathways of the fortress, the light breeze and the soothing sound of the waves brushing against the castle walls below enhance the experience as the priest delivers the “Anastasi” service in the dark amid lit candles. Soon the bells will toll and Christ will Have Risen. Joy will take the place of sadness and spring will be upon us.