IATA: Passenger Demand Recovery Grinds to a Halt in November 2020 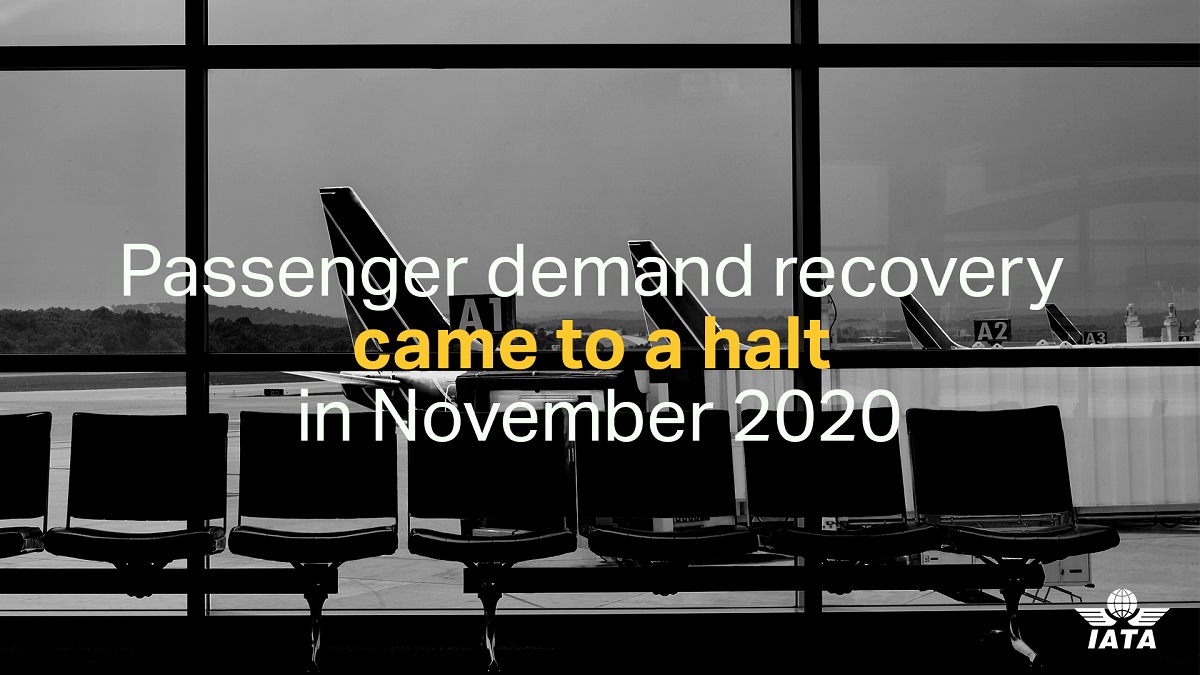 Τhe recovery in passenger demand, which had been slowing since the northern hemisphere’s summer travel season, came to a halt in November 2020 due to severe Covid-19 travel restrictions, the International Air Transport Association (IATA) announced on Thursday.

Europe was the main driver of the weakness as new lockdowns weighed on travel demand.

Total demand (measured in revenue passenger kilometers or RPKs) was down 70.3 percent compared to November 2019, virtually unchanged from the 70.6 percent year-to-year decline recorded in October.

November capacity was 58.6 percent below previous year levels and load factor fell 23 percentage points to 58 percent, which was a record low for the month.

Recovery in domestic demand, which had been the relative bright spot, also stalled, with November domestic traffic down 41 percent compared to the prior year (it stood at 41.1 percent below the previous year’s level in October). Capacity was 27.1 percent down on 2019 levels and the load factor dropped 15.7 percentage points to 66.6 percent.

According to De Juniac, vaccines offer the long-term solution. “In the meantime, testing is the best way that we see to stop the spread of the virus and start the economic recovery,” he added.

Asia-Pacific airlines’ November traffic plunged 95 percent compared to the year-ago period, which was barely changed from the 95.3 percent decline in October.

Middle Eastern airlines’ demand plummeted 86.0 percent in November year-to-year, which was improved from an 86.9 percent demand drop in October.

North American carriers had an 83 percent traffic drop in November, versus an 87.8 percent decline in October.

African airlines’ traffic sank 76.7 percent in November, little changed from a 77.2 percent drop in October, but the best performance among the regions.

Meanwhile, freight volumes improved compared to October, but remain depressed compared to 2019, IATA said. Global demand, measured in cargo tonne-kilometers (CTKs), was 6.6 percent below previous-year levels in November (-7.7 percent for international operations). This was on par with the 6.2 percent year-on-year drop in October.

Greece ‘Races’ the World with Laskaratos in Le Mans, on PlayStation