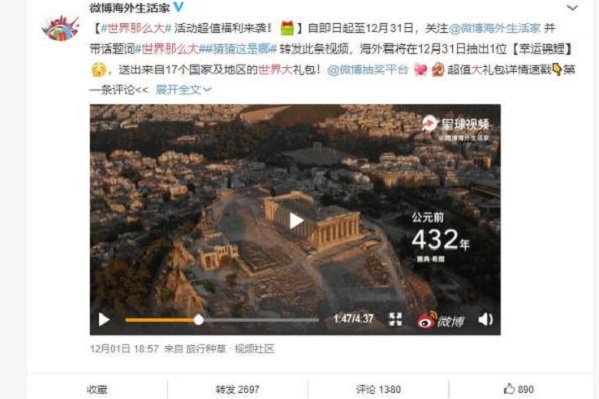 Aiming to promote Greece as a tourism destination to the Chinese market, the Greek National Tourism Organization (GNTO), during December 7-11, took part in a social media campaign held by Sina Weibo, one of the largest social media platforms in China.

Titled “Weibo National Week”, the campaign was launched under the motto “The world is so big, I want to see it!”, and proved to be successful as its hashtag gathered over 210 million views and 211,000 reposts.

The campaign invited Chinese users to explore a number of destinations online and plan their next trip.

Representing Greece, the GNTO service in China posted photos and videos on the platform of Sina Weibo and its own social media about Greek destinations – including Astypalea – and cuisine. 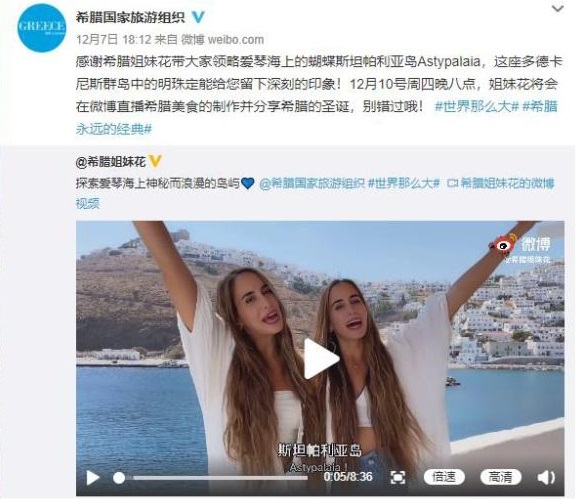 Furthermore, the GNTO collaborated with the Erotokritos sisters, two influencers known as the “Greek Twins”, that live and study in China. The Greek Twins provided the organization with audiovisual material on Astypalea and offered live Greek gastronomy classes in Chinese, preparing traditional recipes for melomakarona, the egg shaped Christmas sweets served with honey, and the Cretan dakos salad.

In addition, Weibo launched an online game under the title “Guess where it is?”, inviting users to identify Greek destinations and monuments, and participate in a draw for unique prizes, as well as make reposts to win gifts featuring the GNTO logo.